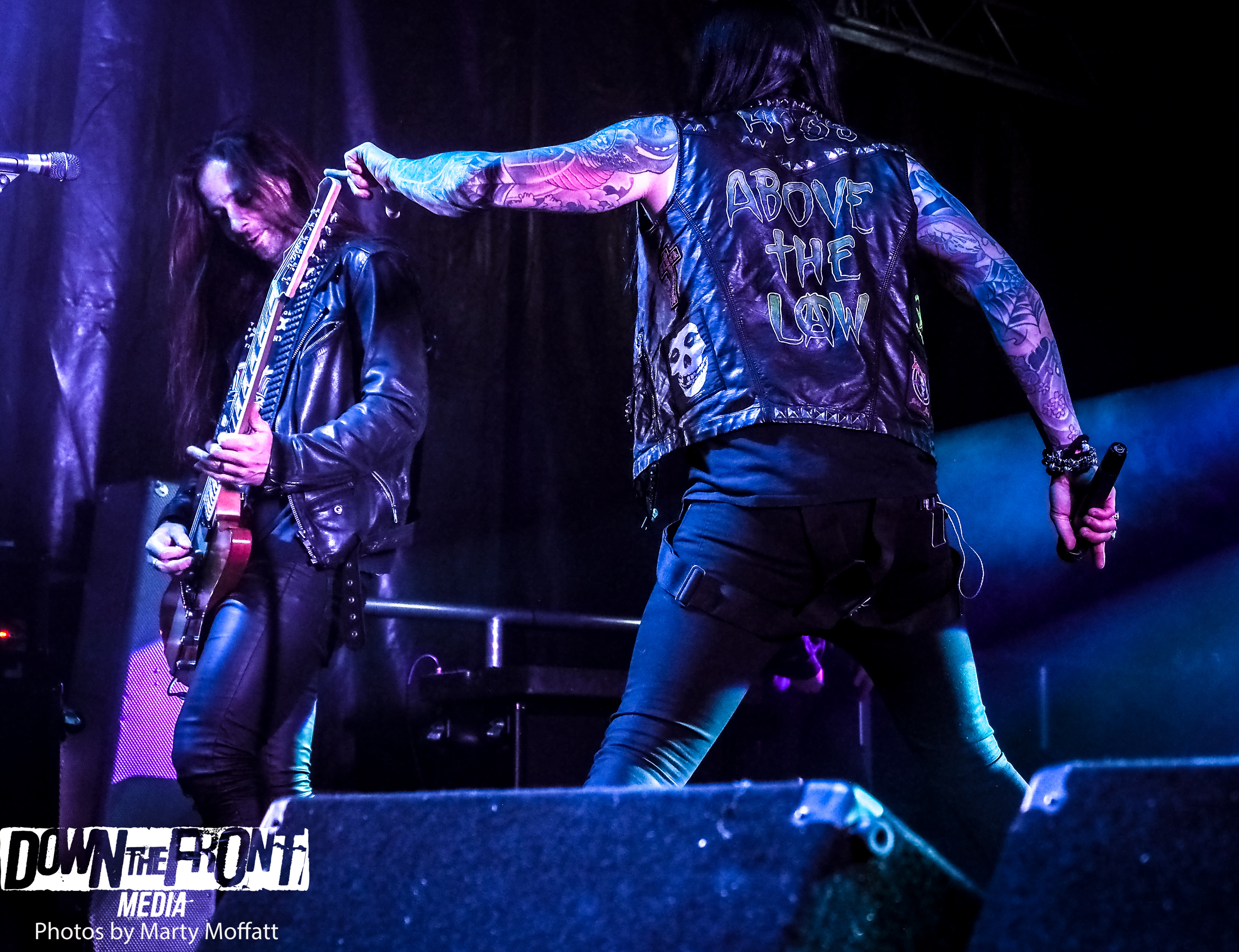 Well, here we are! Day 3!  There are a lot of hung-over faces about and massive queues for the bacon butty stall, but we are surviving.  Although I am tired, this soon shifts as we delve back into another day of amazing music.  The sun may have left us, temporarily, but we are all still beaming.

First up on Sunday are Samarkind who flew in from Dublin to perform. The distinctive vocal from David Byrne stands out amongst his peers coupled with his flowing brown curls and signature scarf.

Black Rain plays out, a fast tempo number, with Darragh O’Hehir driving this one forward on the drums.

They then give us Skinny Rivers which Byrne says was influenced by Deep Purple’s sound.The influence here is clear. If you’re going to pick a band to be influenced by, they picked the right one.

All in all, a classy performance from the foursome. And after seeing them before we wouldn’t expect anything less.

The two-piece take to the stage, but do not let their small numbers deceive you.  They certainly make their presence known with a loud and heavy sound. They have been around since 2014 and certainly know their way around a festival.

James Whitehouse dedicates the track Robot Girl after asking the crowd if anybody has heard them before, in response he says this one is for you. He sings of unrequited love, ‘you’ll never love me back’ but James we already do!  He jumps around the stage, he his bright yellow t-shirt he looks somewhat like a busy bee. Chris Thomason is in full view and thumping away on the skins.

I am pleasantly surprised by their heavy yet melodic combination. Great stuff

Brothers Kyle Lamley and Paul Edwards, not biologically but certainly in arms, are what remains of the original line up of Theia.  They recently lost their drummer but do not let this deter them.  Today they are joined by Falling Red drummer, Dave Sanders.

Lamley is a natural showman; he is engaged with his audience and knows exactly how to work them.

Midway between the song “Paper the house” Lamley stops to introduce Dave and also to mention Mikey Lawless of Falling Red who has been diagnosed with incurable brain cancer.  Sanders takes to his feet and is wearing a F@*k cancer t-shirt. The crowd gives a heartfelt applause and cheers of agreement to the message display across Dave’s chest.  Kyle reiterates this by saying ‘Do everything you want to do now’, to more applause.

The band finishes with the iconic WDFD which gets the crowd jumping.  To conclude Theia not only play kick ass rock n roll they also put on a show.   Watching them leaves me in no mind as to why the rock legends Magnum have chosen them as support on their current tour.  “Fancy a night at the theatre, darling?’ ‘No, let’s go and watch Theia on stage live!

Bai Bang have been around since 1987, named after the area and controversial paper mill in Hanoi.  These guys are a breath of fresh air! Bright neon, pops of colour and animal print.

There sound brings back memories and has a nostalgic air of classic, good old-fashioned rock n roll.  I will certainly be having a listen back to their back catalogue.

A final touch of brilliance was when vocalist, Diddi Kastenholt, took to the crowd.  Selfies galore and this guy not only has the best smile in rock, it is also infectious.

What can you say about Tomorrow is Lost? Newcastle is famous for many things but soon will be known for spawning this band here. Catchy choruses, great vocals, Iron Maiden-esk rolling riffs and a non stop energy, Tomorrow is Lost never disappoint. Cass King leads the charge with great songs such as No one Knows and Shadowman. No one would have known it was one of Adam’s last gig with this upcoming outfit. The band’s stagecraft is simply superb and as the dying notes of We are the Lost are played, we just can’t wait for their album release and it catch these Geordie giants again. The future belongs to Tomorrow is Lost indeed.

All the way from Atlanta, Georgia. Ex Jetboy and D.K Revelle on vocals, these guys on arrival look like the perfect rock band. And boy, do they deliver. Within seconds of Pete K Mally introducing them onto the stage, the Call of the Wild crowd know they’re watching a legendary performance. D.K Revelle not only owns the stage but owns the whole of Lincoln. “we’re still accepting bras and panties”, he jokes. They’re forty minute set is sleazy, gutsy, humorous and above all simply rock n roll. Roll on their UK dates next year.

The boys hit the stage to a huge response as the intro music plays.  We are then treated to the opening few bars of ‘Hang Them High’ before vocalist Tom Rampton screams out “make some f*@&ing noise”.  He is promptly rewarded with a deafening response.

The energy on stage is electric and none of the boys can keep still, both guitarists, Tagore and Tao Grey interchange positions constantly, with Rick Newman, on bass, also joining in while Dhani Mansworth on drums watches over whilst keeping time.  They keep this performance and engagement with the crowd throughout the whole set.

We hear a few more recent tracks and then it’s back to 2011 for ‘The Doctor’, little did we did not know that this would get a reprise later!

Shake the mountain!  My mountains certainly were! TMI!

After landing awkwardly on the stage during the set, Rampton is visibly in pain off stage.  Fortunately, this turned out not to be serious, but he still left the festival dramatically by ambulance.  His fellow band mates were obviously distraught as they took selfies and sang “get him to the doctor” as he was loaded into the ambulance.

A great bunch of lads, playing good old rock n roll, and a good sense of humour. I’d love to go for a pint with them!

Arriving to the stage later than billed due to their sound equipment, we had a short set due to curfew.

The crowd (some travelled from Scandinavia just for tonight’s performance headliners,) were eager to see what the fuss was about. Hardcore Superstar were delayed due to issues with their equipment but then it happened, the anthem that is ‘You can’t kill my rock n roll’ starts up.  The crowd go berserk!  It was a hand to the air moment and if it was still fashionable, lighters would be waving from side to side. Their set may have been short but was jam-packed full of catchy, riff-fueled tunes. The songs echoed around the festival long after the Swedish heroes had left the stage.

So what can I say! The end of this brilliantly ran 3 day festival.  I came with an open mind, for its maiden voyage, and my, oh my, was my mind blown.  From beginning to end, the professionalism shown by the organisers was like they did this every single day of the week.  Everything, from what we saw, ran exactly to plan; timings were on point and of the 2 technical difficulties that we knew about, were dealt with extremely efficiently.

I for one will be returning next year and with pre-sales already flying before any line up has been announced, we can safely assume that this festival is here to stay.

I am proud to say I was there from the beginning.