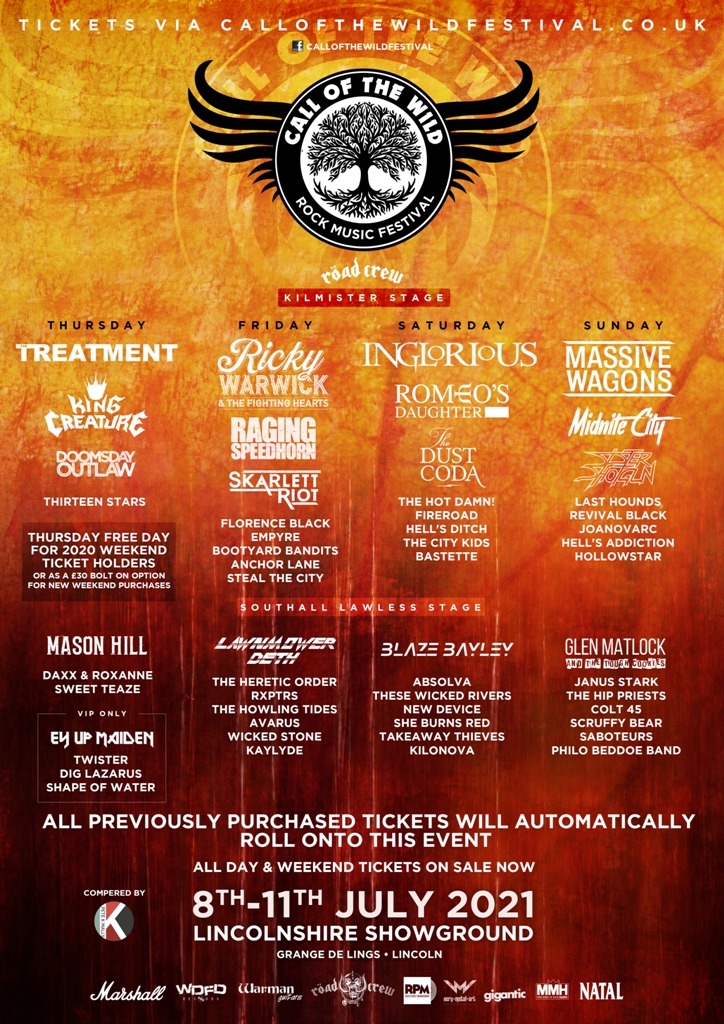 “We were on the verge of postponing Call of the Wild Festival 2021 until 2022, but then, the UK government gave us that glimmer of hope that with a revised Homegrown line up we could still host a Rock festival that we’re very proud of, and more importantly, give the live music fans some hope that this summer is where we get some resemblance of normal life back” states festival director Raz White.

“The road has been tough and tested the most resilient members of our team, but all through it we reminded ourselves that no matter what difficulties lay ahead we started this journey for a purpose, and we desperately want to serve up the most amazing festival that fans could wish for”.

Call of the Wild Festival, which was nominated as Best New Festival 2019, based on its exceptional quality and friendly atmosphere, will now go ahead between 8th to 11th July 2021 and the revised bill could easily be described as the Best of British Rock!

Inglorious are set to blow the proverbial roof off as they headline Saturday night. Recently releasing their phenomenal new album We Will Ride to huge critical acclaim, they promise to be a very popular addition to the festival.

Friday night headliner is Ricky Warwick and The Fighting Hearts who will make their first UK appearance since releasing When Life Was Hard and Fast. Ricky, also very well known as the vocalist in Thin Lizzy & Black Star Riders, and former member of The Almighty, is excited to see his UK fans in the flesh and it’ll be the best Friday night singalong anyone has experienced in well over a year.

Call of the Wild Festival booker Raz White describes booking a band to headline an outdoor festival that he first worked with many years earlier on the pub circuit, is an absolute privilege and testament to any young band that if you genuinely work hard enough and write great songs – there is no ceiling on what you can achieve.

“Sunday night is going to be spectacular as we’ve been promised the biggest & most explosive Massive Wagons show to date”.

The Lancashire based band who are signed to Earache Records topped the charts with their latest release House of Noise have an army of the most loyal and supportive fans and this is undoubtedly a “must see show” for them. A warm summer evening singing along with your best friends to In It Together will be palpable. A memory to cherish.

The extra day – free to all those who hung onto their 2020 tickets as a thank you for their continued loyalty and support – is a treat in name as well as purpose, with headliners The Treatment well known for their high energy live performances, huge songs that effortlessly whip the audience into a frenetic sweaty mess. With the new album Waiting for Good Luck, on Frontiers Records receiving rave reviews already, this will be the best time to see the new songs aired live. Also, making his debut appearance with the band will be new bassist Andy Milburn.

All Tickets & Glamping options on sale now from Gigantic. https://www.gigantic.com/call-of-the-wild-festival-tickets

Call of the Wild Festival