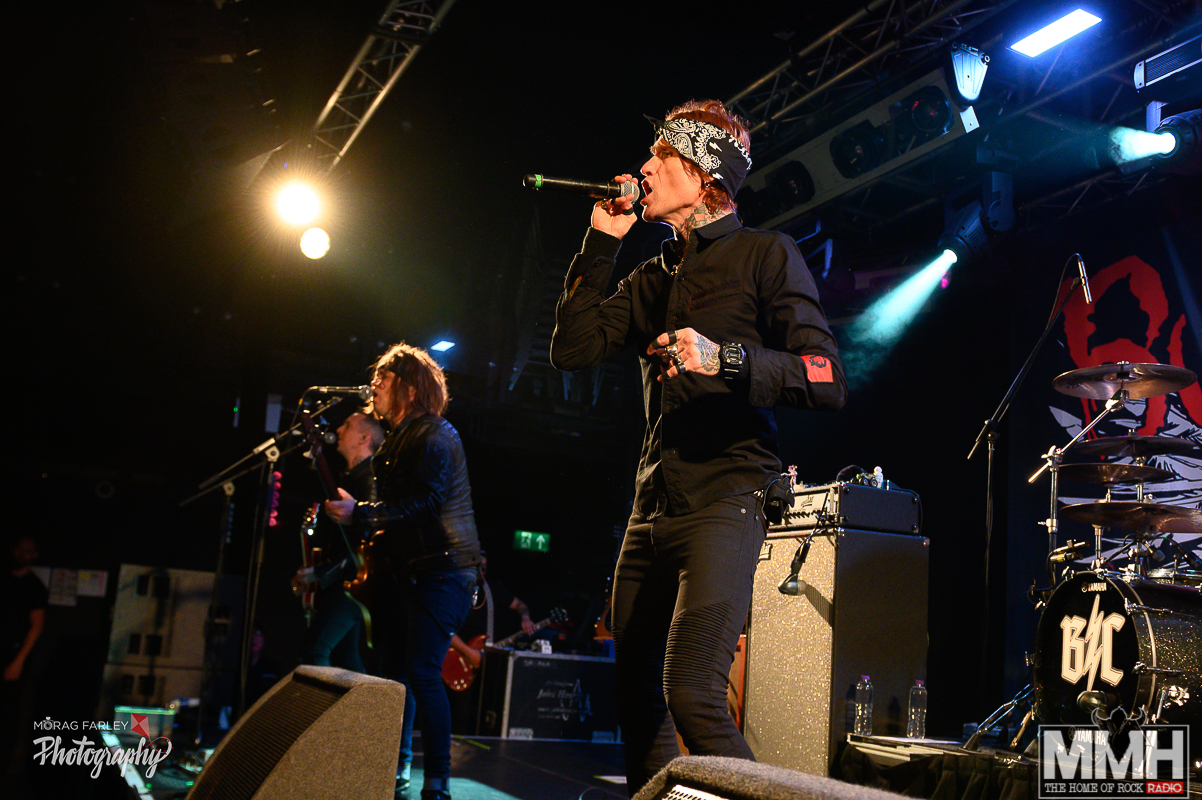 Buckcherry with support from Rocky Kramer and The Treatment. 10 November 2019 – Cardiff Tramshed

Sunday night in Cardiff can be unpredictable – especially in November. Hopefully a three band bill at the Tramshed, headlined by Buckcherry should bring people out, even on a school night!.

The first act on the bill was Rocky Kramer – a sensational guitarist from Norway. With a short 30 minute set, they gave the early arrivals a warm welcome into the venue with some great sounds. Rocky’s band and their music have a bit of a prog-rock sound to them, but they are accomplished musicians entertaining the growing crowd with tracks from the debut concept album ‘Firestorm’ which was released just a couple of months ago.

Mid way through the set, Rocky distributes some merch to lucky recipients. We get a short drum solo and the set finishes with the bands new single ‘Rockstar’ which is taken from the album. They are definitely a band to check out when you get the chance.

With the Tramshed filling up nicely, The Treatment storm onto the stage. They really are a band that will get any party started. They have a swagger and aggression about them, and these 5 lads quickly grab the attention of everyone in the room. They have played in Wales several times and always get an enthusiastic response. tonight was no exception.

Their music is hard rock at its finest. Long hair, tattoos and a rebellious attitude fills the stage.  With two sets of kit on the stage they are restricted. Somehow, Tag and Tao Grey on guitars move round the gaps and show off their talents. They wow the crowd with their shredding skills and complicated, heavy solos. Rick ‘Swoggle’ Newman stomps  round his small corner os the stage – his bass tones filling the spaces left by the guitars and working well with Dhani Mansowrth (Drums) to create a formidable rhythm.

On top of the incredible musical arrangements, Tom Rampton’s vocals complete the bands unique sound. They build a great connection with the crowd, encouraging them to join in, whether it is clapping, dancing, singing – it is hard to escape the infectious beat as they work their hard rock, generating atmosphere in the room that is hard to beat. Their set is filled with hard, fast rock that many say is the future of UK rock music. It is difficult to disagree with that view, when you see and hear them perform songs from their four studio albums before finishing off, the way they always do, with ‘ Get the Party On’.  They really had worked the crowd from the moment they stepped onto the stage until the last note of their final song. An absolutely brilliant performance.

As the headline band finally took to the stage, it was clear that the crowd were up for a full on set from the Californian rockers. With a 20 year back catalogue to choose from, the band has a lot to choose from when putting a set list together. The Cardiff gig was the last on the tour, which included a slot at HRH a couple of days before.

With his mop of red hair hidden by a bandana, Josh Todd instantly owns the room in his black military style jacket, buttoned to the top, clutching a tambourine. They kick off with ‘Head Like a Hole’ – the first single off the latest album ‘Warpaint’. the audience’s attention is instantly grabbed and it is clear that there are many die hard Buckcherry fans in the room. Byt the end of the third track, the jacket is off, revealing Todds well tattooed torso.

Some technical issues cause problems, but Todd keeps the crowd entertained whilst the tech guys work their magic, and within a few minutes, they are back up and running. Todd has a way with the crowd – retailing them with tales of the music, the tour and as we hit the mid point of the set, we are treated to ‘Sunshine’ – a song about their home town in southern california and how the weather is a long way from chilly Wales!

Buckcherry are an entertaining band to watch. After nearly 90 minutes, they reach ‘Crazy Bitch’ and the band on stage go a bit crazy, taking their fans with the. Fists in the air, this track is a fan favourite, and a perfect way to end their set with fans knowing and singing all the words – joining in with the excitement created on stage.

After a brief break, the band returned for a short encore including the obligatory band introductions as they weave a few bars of ‘Proud Mary’ into ‘Say F**k it, before the Sunday evening curfew forced them off stage.

All in all, this was a bill that worked really well. All the bands were excellent, and the good natured crowd thoroughly enjoyed the Sunday rock.