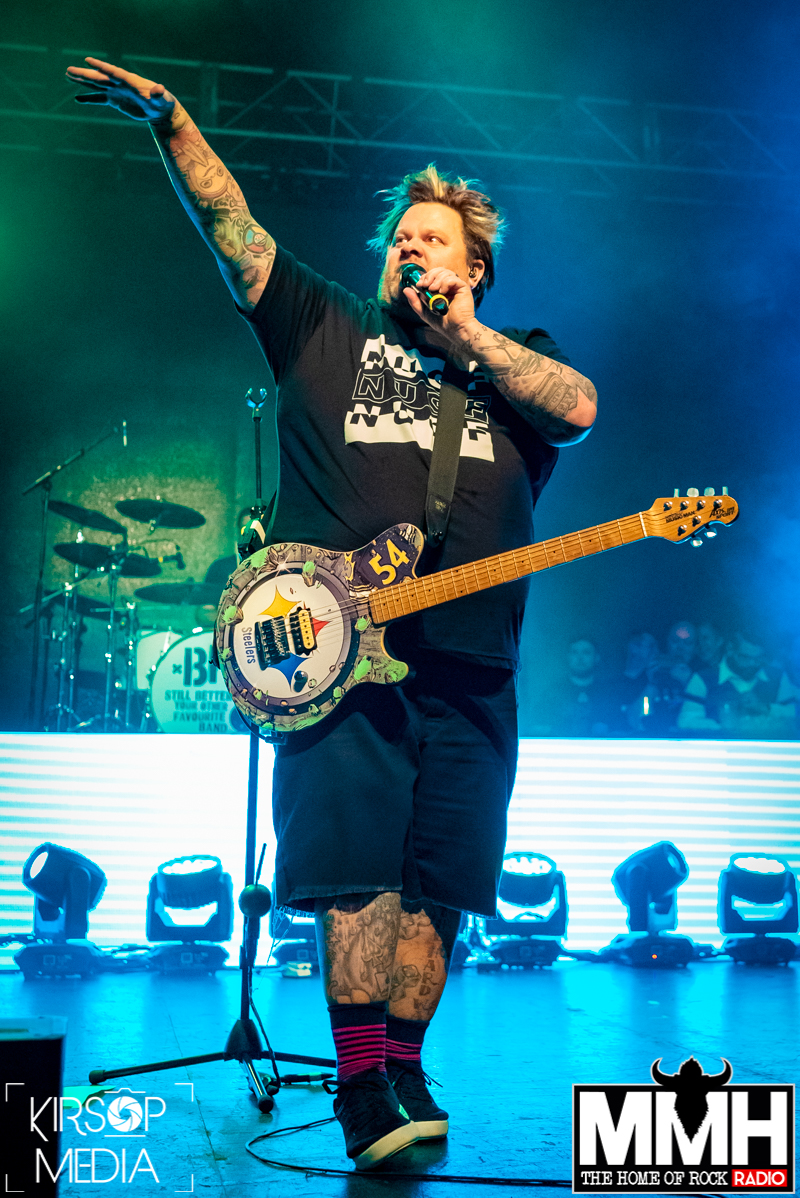 Starting off an exciting night of pop punk nostalgia are newcomers to the scene: Not Ur Girlfrenz. An all teen band hailing from Dallas, Texas, I was very curious to see this new, young band play. Surprisingly, they were pretty good. Whilst the vocals are as whiny as you would expect from musicians their age, the music itself is not bad at all. Mostly an alternative rock sound, it’s easy to see how they won a Battle of the Bands competition over adults. Maren on the drums plays with precision and passion and Liv on guitar and lead vocals is very confident on stage.

There’s even humour already in their talk between songs. They ask the crowd “Are you guys feeling okay?” which of course we scream “yes”. To which the band come back with, “Well this song isn’t for you”, before beginning their cover of I’m Not Okay by My Chemical Romance, which is also, surprisingly good. The best part of their set comes when they play their own song “No One Asked You Anyway” as it has a much more dirty, punk sound than their other songs, and really shows their future potential. The next time these guys come over to the UK, check them out.

Next up are Canadian legends, Simple Plan. Unlike our friends in Bowling For Soup, these guys tend to only do UK tours every 3-5 years (ignoring the odd festival appearance or one off London show) and clearly these breaks leave fans very anticipated to see them.

As they hit the stage the screams are deafening. The combination of the band’s high energy and the crowd’s excitement throughout their entire set makes this feel like a headline set. Pierre’s voice is excellent, he doesn’t falter once and honestly sounds exactly like he does on record.

I couldn’t pick just one highlight from their set so here’s 3:

Now I’ve seen Simple Plan live and experienced this before, but it really is such a fun touch to the show as it gets the crowd involved in a way other than just jumping etc. The only downside of their performance was the songs they chose for their setlist; they said more than once “We’re just gonna play the old shit because that’s what you guys are here for”. Although they still seemed very passionate when playing those songs live, it’s a little disappointing for fans who like more than just their greatest hits. Especially seeing as the two newer songs they did play (Boom! and Where I Belong) did go down well with the crowd.

Overall they are a band that really get the crowd involved and I hope they return for a headlining tour soon!

Before Bowling For Soup come on stage they played the “BFS Theme” over the speakers, which, if you haven’t heard before you need to listen to immediately. It’s a short song to get everyone in the mood for the show with a singalong of “Here Comes Bowling For Soup”. They then go straight into a song that, if you can believe it, is already 20 years old, “Suckerpunch”. Whilst not the most poppy or catchy of their songs, it’s a nice change to hear one of their slightly heavier songs (as heavy as BFS can be anyway). The only downside to which, is the fart noises made at one point during the song. Now I know this is a bowling for soup show but… come on guys.

Before they even took to the stage Jack, sat down with Rob from Bowling For Soup and had this to say:

After some actual fart jokes, High School Never Ends begins and the show really begins. One thing that I’ve noticed when seeing Bowling For Soup before, and again tonight, is how they very much quicken the pace of all their songs during live shows. It makes all the classics hard to sing along to, but does showcase that the band can still very much “rock out” and I think that’s the point.

Something I noticed that was different to the previous times I’ve seen Bowling For Soup is that the stage show has gotten bigger and better. The screens in the background showcase a mixture of their music videos, and real time live footage of the actual show. It’s great to see that the band aren’t simply relying on the “nostalgia” factor to make up the show.

The rest of the show is a mixture of “banter”, a comedy jam and a lot of singalongs. Mostly, the comedy is actually still pretty funny. It’s on the verge of too much at times, but is fortunately broken up by enough actual music to avoid being annoying.

Classics such as Ohio, and Girl All The Bad Guys Want are mixed with the odd curve-ball such as new track Alexa Bliss, BFFF and Dance Song. In conclusion there is the faint feeling at times of “Oh no this is getting a bit old now” but hey! If you want a good night of dancing to pop punk and dad jokes, this is a show for you!