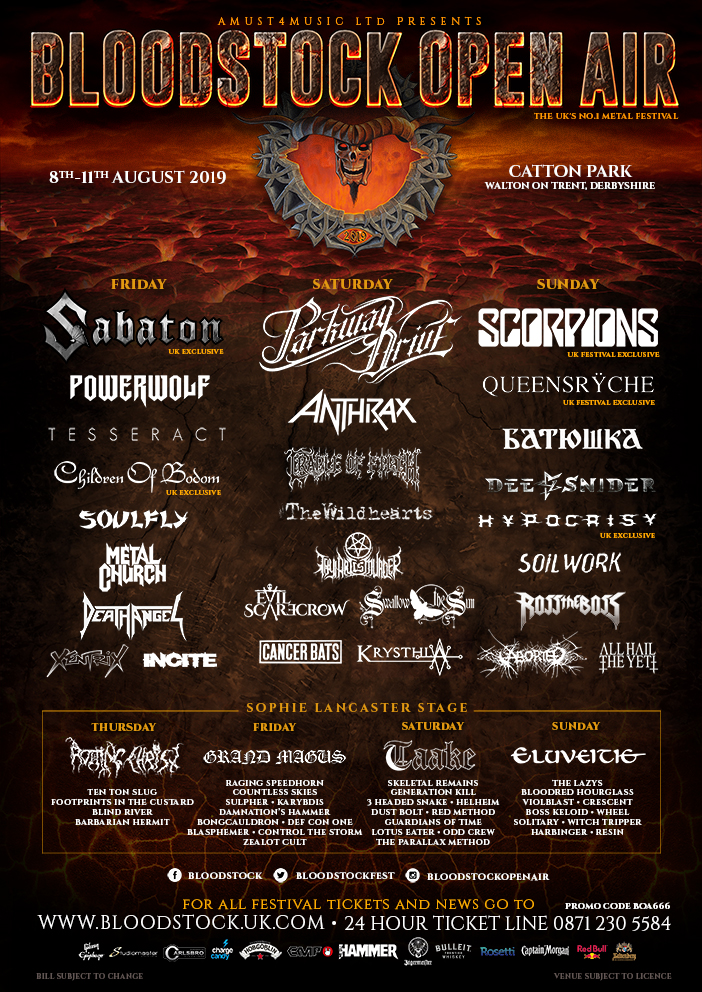 Thursday was an amazing evening and I was really excited for the line-up of the bands playing today. Joining me in the media tent today was our amazing in-house DJ, Adam Onslaught. He was interviewing the following bands today so if you haven’t already please check them out on our page.

Metal Church formed 1980 in San Francisco, California and now live in Aberdeen, Washington and were part of the NWOBHM. The band were promoting and playing tracks off their new studio release Damned If You Do, released through Rat Pack Records. Mike was bursting with energy and jumping round the stage, getting the crowd going and feeding off the sound of the 80’s thrash.

I didn’t get chance to watch their full set as I headed back to the media tent as I was interviewing a band playing on the New Blood stage at 16:30 called Marw.

The New Blood Stage is a great way to check out new and upcoming bands, and where you can also  find Metal 2 The Masses winners who worked really hard to win the hearts of fans and earn a slot. Simon Hall really does amazing work finding new and upcoming acts and giving local bands a chance to play at the festival.

After the interview I headed over to my favourite spot at Bloodstock: Lemmy’s Bar. In 2015 we lost the most honourable man known in Heavy Metal, a true icon who is still sorely missed. No words can describe what is was like when we lost Lemmy Kilmister. Bloodstock opened a bar in his honour back in 2016 alongside band mate Phil Campbell and it has been there every year since. A great tribute to a man who will never be forgotten. I was lucky enough to have a drink back with him in 2010 in The Rainbow bar in Los Angeles, and it will always be a cherished memory. Inside Lemmy’s bar you will find banners across the back of the bar with photos and prints of Motorhead.

Next up it was time for a bit of nostalgia and watch the Brazilian gods themselves: Soulfly. Max Cavalera bought along his ancestral instrument called the Berimbau, was used to play the track Tribe. The band then asked the crowd to all crouch on the floor for their next track called Jump Da Fuck Up. The sight of thousands of fans jumping up is still really impressive and never gets old. Max also payed respect to Bob Marley with Get Up Stand Up. The band mixed a lot of their songs from over the years in to one set and mainly stuck to Soulfy material, with no Sepultura songs performed. The band were also promoting their 11th studio album called Ritual which was released through Nuclear Blast in October last year.

The weather at this point had changed drastically and wind had started to pick up with heavy scattered showers. Fortunately for me, all the bands I wanted to see next were playing on The Sophie Stage.

Raging Speedhorn were up next, a band who always know how to get a crowd going. As the band came on stage, I noticed it wasn’t the regular line up. John wasn’t there but a good friend of theirs  had stepped in. The band are currently celebrating 20 years of beer fuelled British noise, and played many tracks from their older material, but I want to showcase just how amazing their latest material is. One of my favourite trac’s they played from this album was Bring Out Your Dead. The mosh pit was pure chaos. The atmosphere was just one mad party, with everyone looking out for one another and having a good time. The band are from Corby, UK and currently under Polymath.

Headlining tonight on The Sophie stage tonight were heavy metal warriors hailing from Sweden called Grand Magus. Before the band had even begun the crowd were already chanting their name. Words cannot describe just how powerful the vocals are coming from JB, effortlessly hitting the high notes and topping it off by shredding the most insane guitar solos. Fox was outstanding and energetic, feeding of the crowd’s vibes whilst playing the bass and Ludwig absolutely slayed the drumming. A great three-piece band with a lot of talent. Every time this band tour I make sure I’m there. The band got the crowd warmed up well and played one of my favourite tracks, Raven’s Guide Our Way. Then it was time to raise a sword and shield and sing along to the mighty Triumph And Power. The band were also playing tracks from their new latest album, Wolf God, which was released this year through Nuclear Blast. The band wrapped things up with the part of the night that makes a Grand Magus set unforgettable: Hammer Of The North. The crowd were going absolutely crazy at this point singing along with all of the ‘woah woah’s, even while the band were taking their bows and thanking the crowd. You could still hear them over the DJ when he began his set to kick off the evening shenanigans.