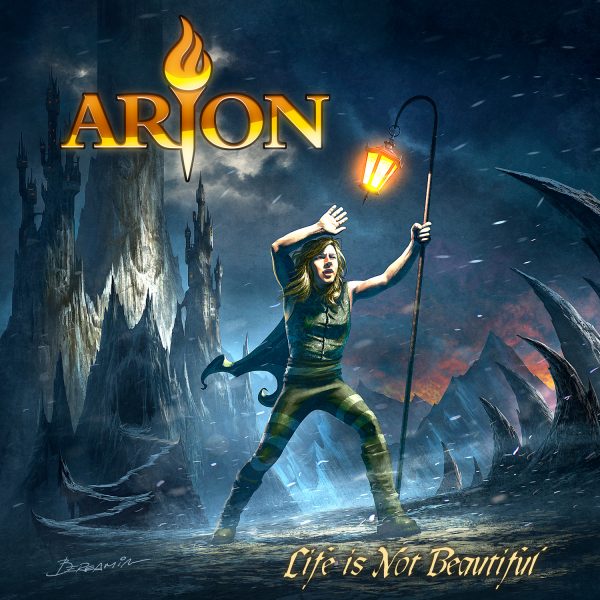 Anyone who knows AFM Records generally knows what they’re going to get with one of their releases. While sticking to a genre you know and producing bands of a pretty consistent quality is no bad thing, it can be very easy for bands in the melodic/power metal field to sound all-to-similar to their compatriots, such are the typical features that fans of the genre expect. Logically then, it is difficult for bands to rise above this sea of big choruses and luxurious hair and catch the attention of the discerning listener. Arion have previously garnered attention with their second album, 2014s Last of Us, but then singer Viljami Holopainen left the band. His replacement, Lassi Vääränen, has already proven highly capable on 2016s recording of lead single, Break of Dawn (featuring Elize Ryd of Amaranthe) but there is still a sense that Arion again have something to prove with this, their third album, Life Is Not Beautiful.

If you have listened to Arion’s previous two albums then you might be surprised at the harder, punchier and angrier sound that perforates through Life Is Not Beautiful. The same symphonic power metal sound is there along with all the trimmings, but the guitar sound is rawer, the drumming is more intense and Vääränen’s vocals have a gravelly edge and power that his predecessor was lacking. For those who like a clean and pure vocal delivery there is the arena-worthy chorus of Through Your Falling Tears and the gentle meandering of closing track Last One Falls. But it is the battle cry of Unforgiveable and the damning bluntness of title track Life Is Not Beautiful where Vääränen really shines, channelling a power and energy that is apparent even through all the vocal layering and other studio wizardry that has been done to give it that ‘big’ sound. The real test will be how well he carries these songs in a live setting. Despite the vocal talent on display, the mixing on some tracks seem a little clumsy, giving the keyboards the front bench and leaving the vocals to fight the other instruments for prominence (most notable on the chorus of No One Stands In My Way). This can be frustrating at times, particularly when it comes to deciphering lyrics on some of the choruses.

Musically speaking, introductory instrumental The End of the Fall sets the tone nicely with an orchestral crescendo that could easily introduce a great cinematic battle and will send fantasy and superhero fans into fits of delight. All of the following eight tracks continue this musical imagery, culminating with Last One Falls, a slow and atmospheric final track that feels like the aftermath to the battleground that was the series of preceding songs. The song titles are not stereotypical of the genre. Rather than being about battles and dragons, mountains and long-lost love, some of the lyrics address more current themes and give you something to think about long after the pummelling riffs and melodies have initially grabbed your attention. Whether said lyrics inspire anyone to action is another matter. I doubt many people will hear Unforgiveable and be driven by guilt to purchase an electric car but who knows. Of course, there is also a ballad: Through Your Fallen Tears, a tale of love doomed to end as the protagonist approaches their ‘twilight years’. The chorus is huge, with the vocal melodies flowing over layers of acoustic guitars, strings and brass. But just when you think the song is over, a final chorus starts in a higher key. While cheesy in the extreme, these key changes can really work. Unfortunately, this one sounds like it has just been slapped on the end of the song rather than feeling like a natural peak for the song to ascend to.

If you already like your power metal but are after something with a slightly harder edge then Life Is Not Beautiful is an album that you need in your life. If not, then there is nothing here that is likely to convert you to the genre. The styles, song structures and melodies are hardly revolutionary, but when this style is done well, damn does it sound good. The riffs and drums combine to create an earth-shaking backdrop over which the various orchestrations and Vääränen’s vocals can soar. I haven’t deigned to mention the three bonus tracks on our review copy of the album, all three of which are re-recordings of tracks of previous album Last of Us, mainly because I feel that they do not suit the tone of Life Is Not Beautiful as they are lacking in the forcefulness of the latter release. If Last Of Us is Arion’s Charmander, then Life Is Not Beautiful is their Charizard: an evolution that sees Arion putting the power into power metal.

Highlights: At The Break Of Dawn (feat. Elize Ryd), Unforgivable and Through Your Falling Tears.

Life Is Not Beautiful is released on 19th October 2018 via AFM Records and can be purchased here.