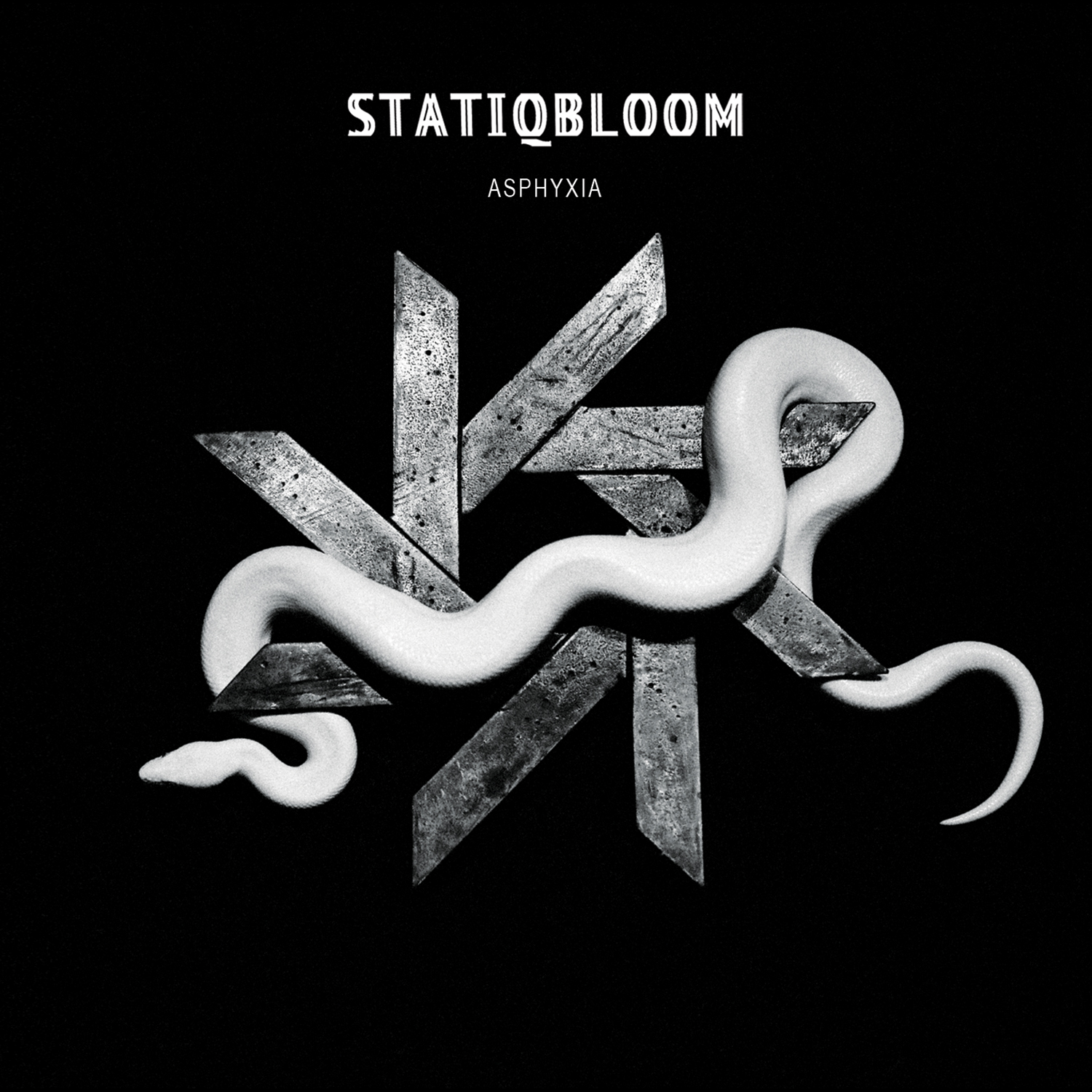 It is a lovely sunny afternoon, the birds are singing and everyone around me is having a nice quiet afternoon with cups of tea or glasses of Pimms. However, I have no time for such reverie. My ears are currently being assaulted by ‘Asphyxia’, the new album by Statiqbloom. As such, swap the sunshine for dingy lighting. Swap quiet for rather loud, and while you’re at it swap the cup of tea for something considerably stiffer.

Statiqbloom is the brainchild of German-born but Brooklyn, New York based musician Fade Kainer, who is also known for his work in Theologian and the metal band Tombs. Producer Denman C Anderson (Semita Serpens) joined the ranks in 2017.
Between the beginnings in 2012 and 2017 a number of EPs and cassettes garnered a reputation for thumping old school industrial sounds.  However, this is the first time a Statiqbloom release has crossed my virtual desk, with their new album and first through Metropolis Records. ‘Asphyxia’ is the follow up to 2017’s ‘Blue Moon Blood’ and 2018’s six track EP ’Infinite Spectre’.

From the get go, attention is grabbed by ‘Ceaseless’, brooding synth pads, harsh ambience and then a fricking huge old school drum beat. This maelstrom is then splattered liberally with the raspy and scathing vocals. ‘Cleanse..’ era Skinny Puppy is immediately brought to mind, though with added new millennium production grunt. As the album progresses this vibe remains, insidious and sinuous synths and textures are driven by percussion dug up from the 80s and injected with something nasty. This musical industrial landscape occurs beneath grey polluted skies where the distorted and haunting voices linger. The compositions are complex, layered and interesting, revealing depth with repeated listening. Other bands from the glory days of noisy electronic industrial are brought to mind, such as Bile and Peace Love and Pitbulls.

‘Possession’ grinds and stomps its way through four and a half minutes of enjoyable punishment to a steady 4/4 command, as does the bristling ‘Eight Hearts Eight Spikes’. Elsewhere, the tracks have more rhythmic variation. Bruising beats and breaks aggressively drive tracks like ‘Painted Red’ and ‘Figure Behind The Door’, and it is this style that I enjoy the most. Not to be ignored are the more solemn and brooding moments, such as ‘Silverface’ and closer ‘Descent’ which provide dynamic interest through the album. There are common threads throughout though, a bleakness pervades the entire album, a heavy cloying blanket of oppressive sound that writhes around the listening threatening to suffocate or strangle.

There are a number of bands that have helped to grab electronic industrial music by the nuts and shaken it until all the glow sticks have dropped to the floor and made it angry once more. Statiqbloom join this force for mayhem with their heavy nod to the likes of Skinny Puppy, Bile and Front Line Assembly. It is somewhat hard to argue that they are reinventing the wheel in any way, but accepting that, Statiqbloom have created a belter of an album with ‘Asphyxia’. It is brash yet creative, bolshy yet considered and violent yet nuanced. A quality release for those craving a more brutal and layered industrial sound.