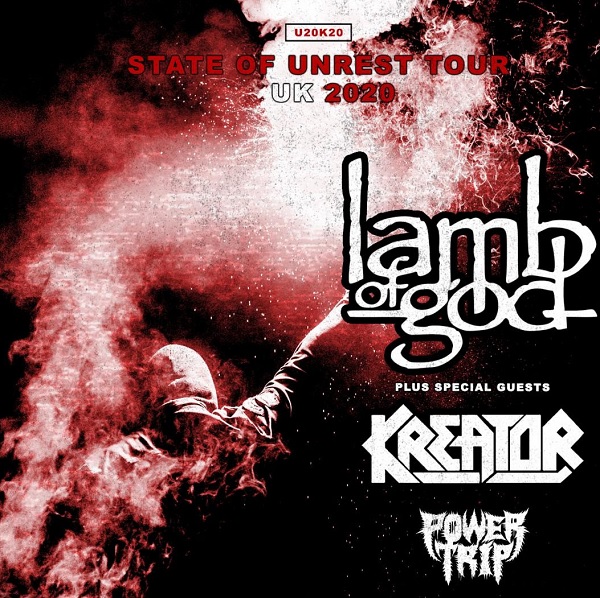 The mighty Kreator will be returning to British shores in 2020 as part of a European tour with groove powerhouses Lamb of God and up and coming thrashers Power Trip. With a catalogue 14 albums deep, it can be difficult for newcomers to know where to begin, so we’ve put together a list of their strongest records to give you a helping hand.

Released in what is considered a golden year for thrash, Pleasure to Kill more than holds its own when going toe to toe with the likes of Master of Puppets and Reign in Blood. 39 minutes of relentless fury, it is Kreator at their most savage; each song smashing like a battering ram. The performances are somewhat sloppy, yet that only makes the music more vicious, with Rob Fioretti’s pulsing bass pushed front and centre. The song writing had improved substantially in the 13 months since Endless Pain (1985), with better riffs and more adventurous compositions and song structures. The title track has gone on to become one of the band’s signature songs, but in truth, you can’t go wrong with anything on this record. A landmark album in the genre, Pleasure to Kill is essential listening for anyone with an interest in extreme metal.

Well… here it is. Not just Kreator’s best album, but perhaps the greatest from any metal band (to these ears at least). A five star riff-fest that never lets up, Coma of Souls pummels you into submission with song after song of dextrous fret board work outs, dynamic compositions and precise, clinical drumming. New axeman Frank Blackfire, previously of compatriots Sodom, dazzles with some of his lead work, seamlessly trading solos with the ever improving Petrozza, whose vocal delivery is dripping with venom. Not a single second is wasted, not one note is superfluous; everything is nailed to perfection. Coma of Souls is a flawless marriage of melody and brutality; a delicate balance that many still try (and fail) to match. Quite simply, an album that should be in the collection of every metal fan.

Generally seen as a ‘return to their roots’, Violent Revolution successfully ushered Kreator into the 21st century. Sami Yli-Sirniö replaced Tommy Vetterli on lead guitar, completing what is currently the band’s longest running line up. His playing is phenomenal, with his phrasing providing the perfect foil for Petrozza’s more brazen lead style. The record is a logical progression from 1999’s Endorama, combining its gothic aura and melodic sensibilities with the controlled thrash tendencies of their late ’80s/early ’90s output. Opener “Reconquering the Throne” tears out of the gates, a sublime mix of thrashing speed and accessible melodies, whilst the anthemic title track displays a more restrained aggression. “Replicas of Life” shows Petrozza still has a knack for writing epic length thrashers, whereas the trio of “Ghetto War”, “Mind on Fire” and “System Decay” recall the tight, mechanical rhythms of Outcast (1997). A well rounded album with few weak spots, Violent Revolution was the beginning of Kreator’s ascent back to the top of a scene they’d helped to shape.

Arriving four years after Violent Revolution, 2005’s Enemy of God picks up where its predecessor left off, infusing furious thrash riffing with catchy guitar harmonies. And like the previous record, Andy Sneap is once again on production duty. The sound is sleek and clean, but a little too sterile, neutering the ferocity of the music somewhat. The bass drum sound is very clunky, robbing some of Ventor’s faster footwork of its clarity. Thankfully, the material is strong enough to overcome this drawback. The title track is an absolute steamroller of A-grade melodic thrash, whilst the speedy interlude of the otherwise mid tempo “Impossible Brutality” is a fantastic passage of blistering riffery. The more popular tracks are on the first half of the record, but the latter half is actually the better of the two. “One Evil Comes – A Million Follow” possesses an almighty gallop, “Dying Race Apocalypse” and “Under a Total Blackened Sky” cycle through countless catchy riffs, whilst the dynamic closer “The Ancient Plague” is captivating; Petrozza’s closing dialogue and Yli-Sirniö’s sublime solo an incredible culmination to a mammoth song. Enemy of God built upon the success of Violent Revolution and once again put Kreator at the forefront of thrash.

After a disappointing outing with Phantom Antichrist in 2012, Kreator returned with a vengeance in the form of Gods of Violence, their best record since 1990. It succeeds where its predecessor failed, taking the template of ultra melodic, grandiose thrash and increasing the quality tenfold. The result was simply breath taking. After being gently ushered in by “Apocalypticon”, “World War Now” proceeds to level everything within a five mile radius, and the intensity and aggression doesn’t let up until the ethereal coda of “Death Becomes My Light” rings out. You’d be hard pressed to find a song that doesn’t deliver, with “Totalitarian Terror” and the title track rank among the best the group have ever written. Gods of Violence is an impressive offering for a band over 30 years into their career, and improving upon it will be an almighty task when Kreator get round to recording album number 15.

You can find tickets for Kreator’s tour here.