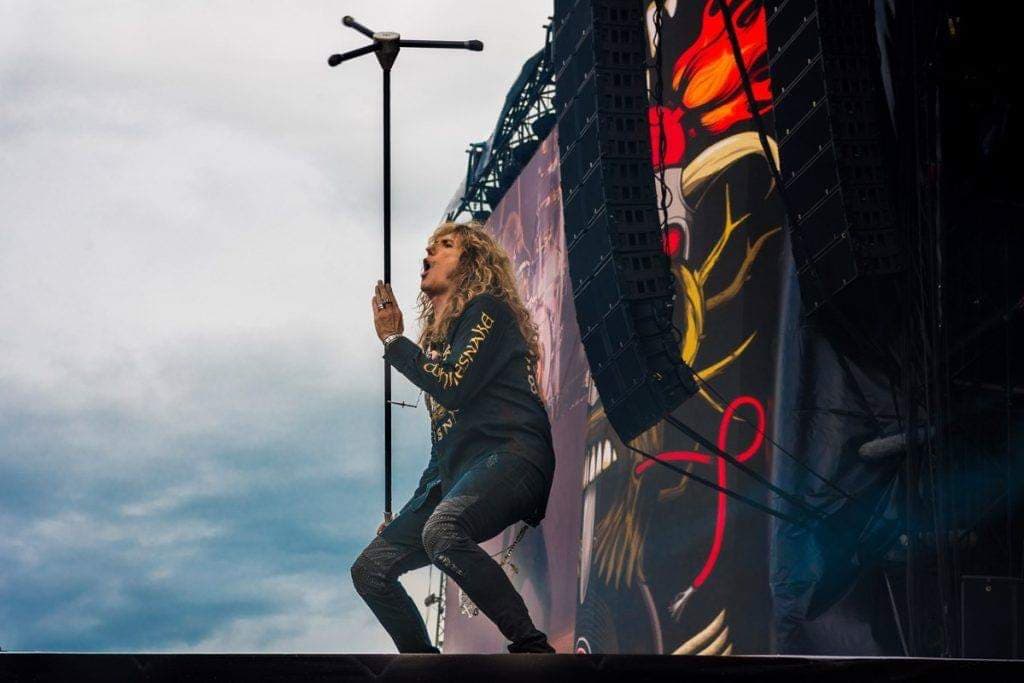 Whitesnake were founded by singer David Coverdale following his departure from Deep Purple in 1978.

There have been many changes over the years, which is not that unusual for a band that has been performing for such a long time. David Coverdale is the only remaining member from the 1978 line-up, but he always surrounds himself with very talented musicians.

I was a latecomer to becoming a Whitesnake fan. They had been playing for 12 years before I first heard them. I went to Monsters of Rock Festival, Donnington, UK in August 1990 to accompany my sister. I have to admit that I hadn’t heard of Whitesnake at that point (I was a bit young and daft!). I was blown away by Whitesnake on that day, and have followed them ever since.

It would take hours to count up all of their tracks, but here are my top 10 tracks in descending order:

This track is a definite fan favourite, and the audience will happily sing their hearts out along with the band when this is played live. The track was inspired by the break up of David Coverdale’s first marriage. The lyrics “I’m so tired of trying, I always end up crying. Fool for your loving, no more” is one that many people can relate to which is undoubtedly what makes this a popular song. The sound to this track, like many others, comes across as quite bluesy, and definitely shows off David’s huge vocal range

9) Here I Go Again (This track was originally on the album Saints and sinners 1982, but it was also re-recorded for their 1987, self titled album.)

This was the first time Whitesnake had managed to get a number one hit single in the US. It also got as high as number 9 in the UK charts.

The track is very rocky, featuring heavy beats, and definitely one to attempt to sing along to.

The re-recorded version, featured a slight wording change. The original chorus went like this:

And here I go again on my own, goin’ down the only road I’ve ever known. Like a hobo I was born to walk alone.

The word ‘hobo’ was altered to ‘drifter’, to ensure that ‘hobo’ wouldn’t be misheard as ‘homo’.

The lyrics to this track rang true with me, as at the time I had no idea where I was going either. I was just wandering along, drifting from one idea to the next.

This track is melodic and entertaining. It’s not a track that shows off David’s huge vocal range, but is more one to have fun singing and dancing along to. Perfect for getting every one up on their feet a party and/or a live concert.

This is another track from the slide it in album. It’s is another fun track, filled with entertaining lyrics. This one does build and build for the first couple of minutes, and then kicks into a harder, heavier sound, showcasing the whole bands talent for diversity.

Both of the above tracks are full of innuendo, but are definitely fun to listen to.

This album as a whole is my definite favourite, and there isn’t a track on it that I don’t like.

Still of the Night kicks off this album with style, and is one of Whitesnake’s heavier tracks.

The beginning riff and opening vocals were enough to draw me in to the track. It’s heavy, punchy and impossible to ignore. The guitar solo in the middle section just adds to the whole feel of the track.

This is the one I play to people who say that “Whitesnake only do ballads”.

The track kicks off with a heavy guitar and drum based riff, followed closely by David’s opening huge vocal. This is definitely a dance floor hit, and I can remember many a rocker headbanging and swishing their hair about to this one. The track does have a quieter section in the middle to give the headbangers a quick rest. If you fancy still partying in the quieter part, it offers the perfect beat to clap along to.

The “Flesh and Blood” album was released on the 10th May 2019, and is my favourite release since the 1990’s. There are two tracks that I can’t get enough of, but the whole album takes me back to the 1980’s, which in my eyes is not a bad thing at all.

The first of those that I have featured in my top 10, is Shut up and Kiss Me. The track is fun to sing or dance along to and reminds me so much of 80’s Whitesnake. The lyrics are fun, make you smile, and offer the perfect chance for a dance, or sing-along. I can definitely see this, as one to attempt on karaoke night! This is one of the heavier tracks on the album, along with the track at number 3 on my list below.

Whitesnake show that they still have mountains of energy, and the strength to keep the hits coming.

This track is a high energy one, with Davids vocals on point as usual. I often have to remind myself that he is 68 years old, but still never disappoints.

The chorus is as catchy as you like. Hear it once, and it will stick with you!

The track is a soft, comforting track, with lovely, warming lyrics. To me it is something to listen to when you fancy something calm and serene.

I love that Whitesnake can convert from a ballad to a lively/rocky track with such ease.

Yes, I am a sucker for a ballad!

This to me is one that I cannot fail to sing along to.

It’s also one to relax, with a glass of fine wine.

What’s not to love about these guys?

In my opinion, the band is still on form 41 years after first forming.

David is a gifted singer and has always remained true to his sound, and kept the band rocking.

If you fancy catching Whitesnake, they have six UK gigs coming up this year. The first of which is at the O2 London, on the 31st May. Check out the poster below for the rest of the dates.

Part of my collection below, which I am positive will keep on growing.

Header photo by AmandaC Photography, who can be found on Facebook here