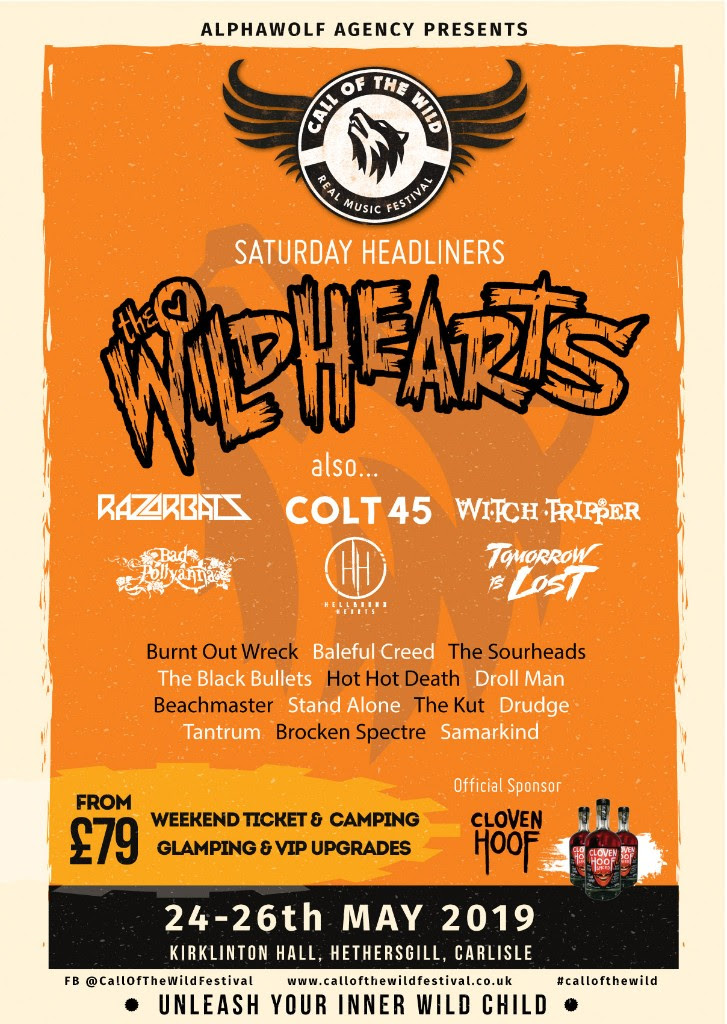 Call Of The Wild Festival 2019 has just upped the stakes on an already amazing line-up, confirming that rock legends ‘The Wildhearts‘ will be the Saturday headliner.  With over 20 years as a leading UK export, Saturday at Call Of The Wild just got wilder!

From their entrance in 1993 with ‘Earth VS…’ which cemented their claim as Britpop destroying rockers from day one, The Wildhearts have consistently released great music, entertained fans across the world and have done more than their share at encouraging new talent to rise up – an ethos Call Of The Wild share with passion!

Festival organisers Raz While & Dave O’Hara had the following to say about securing The Wildhearts for Call Of The Wild:

“We are absolutely thrilled that The Wildhearts accepted our offer to perform at the inaugural Call of the Wild Festival. In the truest spirit of Rock n Roll, there is no other band on the entire planet that we would wish for to headline the Saturday night.

Being lifelong fans of the band, this is truly an honor for us.“.

In the unlikely event that you’ve not experienced The Wildhearts, check out the video for Suckerpunch, which is taken from the bands’ first album Earth Vs The Wildhearts. Raw, powerful and highly entertaining, make sure you see The Wildhearts at Call Of The Wild 2019.

Alongside the Saturday headliner, we have a host of other bands that have been added to the weekends’ festivities!

Joining the festival all the way from Norway, Razorbats are going to be bringing their punky, glam rock to Cumbria. Having released their second album, ‘II’ earlier in 2018 you can be sure that the bands’ international acclaim will be a great addition to Call Of The Wild.

Hailing from Cumbria, COLT 45 is returning from a brief hiatus, Adam Lewis from the band has explained why Call Of The Wild is a perfect match for the bands’ return.

“We’re really excited about the Call of the Wild show already – it’ll be our first proper show after nearly a year off from the band.  We’ve enjoyed some downtime, but we’ll be raring to go – and playing this brand new event right on our doorstep in beautiful Cumbria ticks all the boxes.  There’s so much talent in the region and it’s awesome that local acts have the opportunity to step up and play alongside more established names and build their fanbase and experience.  It’ll be great to catch up with some old friends and check out some bands we haven’t seen before too. There’ll be plenty more to come from us in 2019 – keep an eye out!”

As if Call Of The Wild isn’t already great enough, with The Virginmarys, The Wildhearts and the host of great bands already announced, there are also another 17(!!!) bands added to the celebration.

Mansfield’s WitchTripper are going to give those in attendance an unhealthy dose of their full-on groove-laden, shred’n’roll. Go watch State Of Mind now!

London based alt-rockers The Kut are having a great year, with their album hitting the charts, their self-described ‘basement rock’ is probably moving to the penthouse sometime soon. Check out Mind Games.

Scotland’s Tantrum bring classic British Heavy Metal to Call Of The Wild. Championing the new wave of old school, check out N.W.O.B.H.M, if you can listen to this and not bang your head, there’s something wrong!

West Yorkshire based Hellbound Hearts will be bringing their grungey hard rock to the stage. A rising band, these are ones to check out. See their Broken Hearted Video.

Also, from West Yorkshire are Bad Pollyanna with the sublime vocals of Olivia Hyde, you can expect to be blown away by these guys! Check out Monstrous Child now!

Burnt Out Wreck will be delivering a slice of bluesy classic rock, fronted by former Heavy Pettin’ drummer Gary Moat, check out their recent release Flames.

From Belfast, Baleful Creed like their rockin heavy & that’s what they’ll be bringing across the water. Check out the rifftastic Devil’s Side.

Retro rock driven blues will be offered by The Sourheads. Wakefield will be missing these guys while they rock Call Of The Wild, you can get your groove on early to Don’t Get Caught (I Am The Lotus).

Basingstoke posse The Black Bullets bring their punky rock’n’roll and dirty licks to raise the temperature and the roof. Watch the video for DOLLS.

Newcastle NWOCR rising stars Tomorrow is Lost will be wowing the festival crowd in much the same way they’ve done up and down the country during their short career. This band only get better, check out We Are The Lost.

Bradford & Leeds is honored to call Stand Alone their export, and we’re delighted to be importing their rifftastic rock to Call Of The Wild. Check out Save You.

Voted number 10 on Planet Rock Top 20 albums of 2017 for their self-titled debut, Samarkind demand your attention! Check Out Sun Stroke Heart for a slice of their contemporary bluesy classic rock.

A key component for Call Of The Wild is to give a showcase to local and smaller bands the opportunity to get on stage with festival regulars. Announced so far are:
Hot Hot Death are loud and unrelenting hardcore/punk. Check out their first track Howl. With a distinctly 90s tinge to their sound, Droll Man can be experienced by watching Pennies Worth. Penrith’s Beachmaster serve their genre-crossing alternative rock in style, check out Wreckhead. Brocken Spectre‘s noise art rock, bring something different to the line-up. Be sure to check them out, do so now with Drive By Election.

The first official sponsor for the festival is Cloven Hoof, creators and purveyors of the finest Spiced Rum. With their own stage, this means even more room for brilliant talent to be on display.

“We are absolutely thrilled to be sponsoring Call of The Wild Festival. The line up is special – we’ve raised the Hoof with most of the bands, so we simply had to be a part, and to have the second stage named The Cloven Hoof stage is genuinely a real honor. Raz and the team know their stuff and do things right, so this festival is gonna be the real deal …. roll on May,“.

Situated just north of the border city of Carlisle, Kirklinton Hall and grounds is set to host a brand new music festival that will deliver world-renowned international rock bands alongside a host of breakthrough acts from near and far.  Welcome to Call Of The Wild.

From 24th – 26th May around 70 bands will perform over three stages along with a craft village, children’s entertainment and reenactments.

Initial tickets are on sale now, with prices will starting from £79 per person for a three-day pass and camping (Tier 1). Tickets can only be purchased through the festival’s website: https://callofthewildfestival.co.uk/shop.

Tickets are available to either buy right now, with the added affordability options of paying by deposit or payment plan.

Alongside, family and children’s tickets, VIP camping that will include Yurts, Bell tents & other Glamping options will be available soon. Prices will vary according to the size of the booking party. Several bars and catering vans will be onsite, catering to a wide variety of tastes and requirements.

Already announced bands for the first Call Of The Wild are:

And there’s still much more to come…

|
Call Of The Wild Festival, Headliner, rage pr, the wildhearts