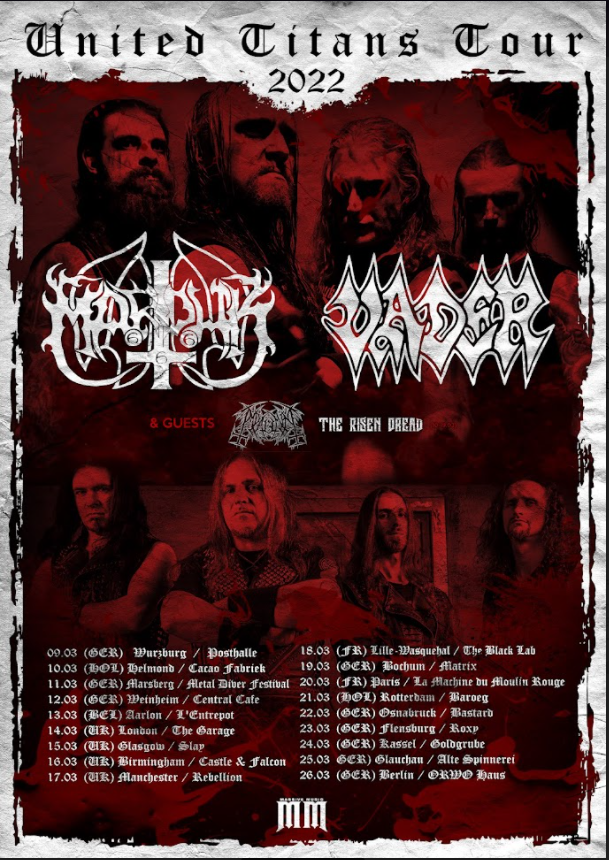 The bands are set to appear at the following dates:

The band had this to say about the announcement:

“We are incredibly excited and proud to announce that we are joining Vader and Marduk on their United Titans Tour across Europe and the UK alongside Impalement! We cannot wait to hit the road with such incredible bands to destroy some venues and show everyone what we got!”

The band have also put out a new video for “The Night Hag” which can be seen here:

The Risen Dread have had a busy few years. Since forming in 2018, the band were invited to support Malevolent Creation, embarked on their own headline European tour and during the pandemic allocated time to finish their debut album ‘Night Hag’ which is set for release on January 28th 2022.

Produced by the band, recorded by Josh Robinson at the JSR Studio in Belfast in June 2021, and mixed and Mastered by Kai Stahlenberg at the Kohlekeller Studio in Germany in August 2021. ‘Night Hag’ is a concept album with mental illness as its central theme, with all the tracks focusing on a particular illness or a historical figure that had multiple disorders.

The titular Night Hag is mentioned throughout the album with the final track, featuring Brazilian composer Renato Zanuto, of the eleven-song opus acting as a means of pulling the themes together. The band’s first single, “White Night”, featured Sepultura guitarist Andreas Kisser and received its premieres on Kerrang! Radio and Midlands Metalheads.

The Risen Dread was founded by Colum, Marco, Mat and Will in October 2018 and

the name references the feeling of existential dread that sometimes surfaces in people without knowing how or why. In May of 2019, they hit the studio to record their debut EP ‘Delusions’, releasing it on September 26th 2019.