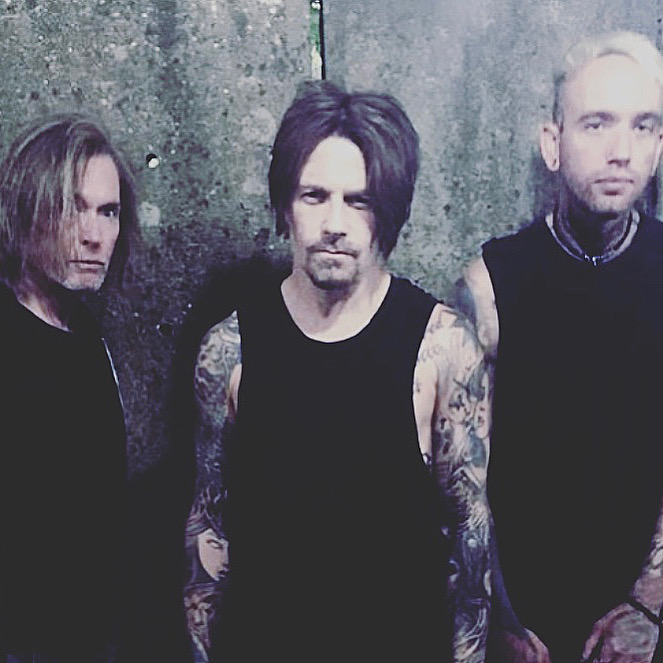 Following on from my piece about The Sisters Of Mercy, I thought I’d write a little about the band that supported them on their Germany leg of the 2003 Smoke and Mirrors tour… That band is Sulpher.

For those who may not know, Sulpher is an industrial rock band formed in Birmingham by multi instrumentalist Rob Holliday and drummer / programmer Steve Monti.

For non-fans of Sulpher, if their names seem familiar, that may well be because as well as being Sulpher, between them, Holliday and Monti have played with a who’s who of industrial rock / electronic music including the likes of Curve, The Jesus and Mary Chain, The Prodigy, Gary Numan and Marilyn Manson amongst others – now that’s an impressive list!

Sulpher’s first album Spray was released in 2002 on Dependent Records along with the singles One Of Us and You Ruined Everything. If I was to compare this album, and I hate doing that as bands deserve their own recognition, but as people do say “what or who do they sound like?” I would say imagine a hybrid of Nine Inch Nails Fragile / With Teeth era coupled with later Gary Numan, say, Pure onwards (which probably have something to do with the fact Rob and Steve both contribute to Numan’s Pure and Jaggered albums released in 2000 and 2006 respectively). Fear Me was used for the USA 2002 Winter Olympic Games promotional adverts.

I would like to add, the title track, Spray, strays away slightly from the rest of the album and reminds me of a 60 second homage to Ministry’s – The Mind Is A Terrible Thing To Taste album. Rest In Peace Bill Rieflin who we unfortunately recently lost too soon (Ministry 1988 – 1996).

Sulpher then toured the album throughout 2001 till 2003 (supporting the likes of The 69 Eyes and as previously mentioned The Sisters of Mercy) adding additional live guitarist Joe Crudjington to the line up.

After 2003, Sulpher took a (rather long) hiatus to concentrate on other projects. (Such as Gary Numan, The Mission and The Prodigy). Just under a decade later they returned in 2012 with a handful of UK shows, but unfortunately disappeared again till 2018.

2018 then saw the return of Sulpher, hitting the live scene hard with shows around Europe including Spain, Germany Scotland and England including festivals such as Amplified, Wave Goftik Treffen and Bloodstock 2019, which you can watch in full here

As well as as several live shows, 2018 also saw the release of their 2nd album No One Will Ever know on the label SPV/Oblivion, along with the singles No One Will Ever Know, Take A Long Hard Look and Used.

This is an album I personally love, again, if I have to compare, it still has a sound of Nine Inch Nails, but please don’t take this as a Nails clone, just a comparison, Sulpher are a fantastic industrial rock band in their own right and deserve to be recognised as such.

No One Will Ever Know expands its sounds from Spray, yes it still has it’s industrial rock anthems, but also has its more melodic tracks such as Tomorrow and You Threw It All Away. Follow You Down has a Deftones vibe (again, hate to compare) about it. Feels Like The End, my wife says, kind of reminds her of Foo Fighters (we’re no longer speaking!) and the brilliant Didn’t Ever, an instrumental which wouldn’t be out of place in a thriller movie with it’s calm yet dark sound building up to a distorted guitar driven finale.

Sulpher were mid tour before the Covid-19 crisis hit, and I can only assume that they will hit the scene again as soon as possible – until then, please stay safe, follow the rules and lets all do all we can to stop the spread of this disease.

You can listen to Sulpher on Spotify, iTunes and Amazon