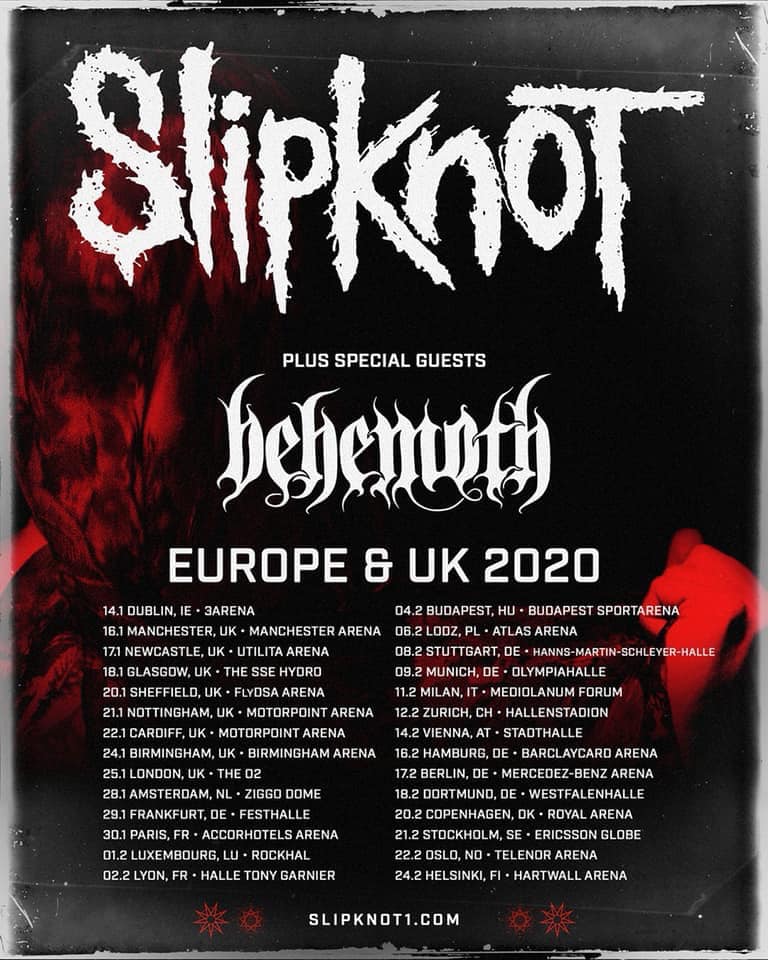 Twenty years after exploding onto the scene with their self-titled debut, Slipknot are back and have recently announced a mammoth European tour in support of their chart-topping album, We Are Not Your Kind. If you read our review of their Download 2019 headline set, then you know this is not a show you want to miss. For the uninitiated, we’ve put together a career-spanning top 10 songs for you to dig your teeth into. Ten songs are not enough to do justice to the numerous absolute belters that Slipknot have released over the years, ask any member of staff at MMH Radio and you’ll get a different list. Still, the below are a damn good place to start. See you in the pit maggots.

The second single from latest album, We Are Not Your Kind, “Solway Firth” shows Slipknot at their heaviest, deranged and traumatic best. Age cannot tame them it seems. The anguish and anger in Corey Taylors delivery makes you uncomfortable just listening to it, and it is perfectly supported by heavy metallic rhythms (see, those oil drums serve a purpose) and scathing electronics. Some of the heaviest hooks Slipknot have ever written wrap up the closing track to one of the best albums of 2019.

From the closing of their most recent album, to the opening of their first: “(sic)” has been an integral part of the Slipknot live show since it was first unleashed onto the world in their 1999 debut. It is the original example of the now classic Slipknot sound: heavy and rhythmic riffs, frantic percussion and a rapid and unhinged vocal delivery from Corey Taylor.

Another of Slipknot’s trademarks is the ability to craft some of the heaviest material into ferocious live anthems. 2014’s album .5. The Gray Chapter had barely hit the shelves and fans were already able to chant along to the latest piece of anthemic chaos delivered by the nine. The track opens with a studio recording of Shawn Crahan (ie, Clown) describing the rhythm of the main riff, and it is one of those introductions that makes a song instantly recognisable. The defiant chorus chant rapidly became another key part of the Slipknot live show.

“The Heretic Anthem” rapidly became a key song from 2001s Iowa, and it’s easy to see why. Considered by many to be both their heaviest and best album, Iowa was the sound of a band refusing to conform to anyone’s expectations of where they should go after their explosive debut album. Nothing epitomised this more than “The Heretic Anthem”: four minutes of unadulterated rage targeting the people and the industry who Slipknot refuse to be controlled by. The call and response of the chorus has been a key part of their live show ever since it’s release.

‘Sell-out’ isn’t a term you would think to associate with one of the largest and most unconventional metal bands on the planet. Yet, as with every successful band, Slipknot got their fair share of accusations with the release of their experimental and (relatively) accessible third album, Vol 3: The Subliminal Verses. With a video that teased the faces behind the masks, “Before I Forgot” brought an almost radio-friendly Slipknot to the front of modern metal. With its instantly recognisable riff, the gang-chants begging for crowd interaction and a vastly improved singing performance from Corey Taylor, there’s a reason this is now one of Slipknot’s best-known tracks.

‘Old does not mean dead, new does not mean best’, roars Corey Taylor in 2018s stand alone single. The first new music in four years showed that the nine were back and they most certainly weren’t f**king around. With Corey Taylor on the form of his life and new members Jay Weinberg (drums) and Alessandro ‘V-Man’ Venturella (bass guitar) comfortably in place, “All Out Life” was the sound of band telling people not to follow trends and search for the next big thing, but to focus on the quality and the staying power of artistic creations. To prove their point, Slipknot released one of the most vibrant and relevant songs of their career. It also spawned the title for the following album, We Are Not Your Kind.

You know when people tell you about the ‘jump the f**k up’ moment in Slipknot live shows? This is THAT song. The rapidfire vocal delivery and almost bouncing rhythms contributed to Slipknot being initially lumped under ‘nu-metal’ category, but Slipknot have long proven that they are a style unto themselves.

When people say that they have heard Slipknot before, this is probably the song they have heard. Easily the biggest song of their career, “Duality” is the catchiest chorus the ‘knot have ever written. It’s startlingly easy to forget the lyrics you are singing when it’s this infectious, but the lyrics about pushing fingers into eyes to stop the pain showed that Slipknot were still far away from the sell-out label being thrown at them around this time. With a head-banging riff and huge chorus, it was a side of Slipknot no one knew they wanted. Oh yea, the video is absolutely mental as well.

Another early example of the classic Slipknot sound, an opening dissonant guitar line quickly builds into the stomping ground of chaos fans expect. The chorus chant rapidly became the Slipknot mantra: be who you want to be and don’t judge others (although they put it less politely). This ideology still reflected today in their latest album title, We Are Not Your Kind, showing that twenty years later the band still refuse to be bound by societies expectations.

Probably one of the hardest decisions ever made, but pole position has to be given to the opening track of 2001s Iowa. With it’s groove metal bounce, f**k everything attitude, crazed vocal delivery and berserk rhythms, it is now a definitive Slipknot anthem, and indeed, anthem for any who feel there is something wrong with the state of society.

We Are Not Your Kind is out now via Roadrunner Records and can be purchased here.

You can find tickets for Slipknots European tour here.

|
.5: The Gray Chapter, Iowa, roadrunner records, Slipknot, Vol 3: The Subliminal Verses, We Are Not Your Kind