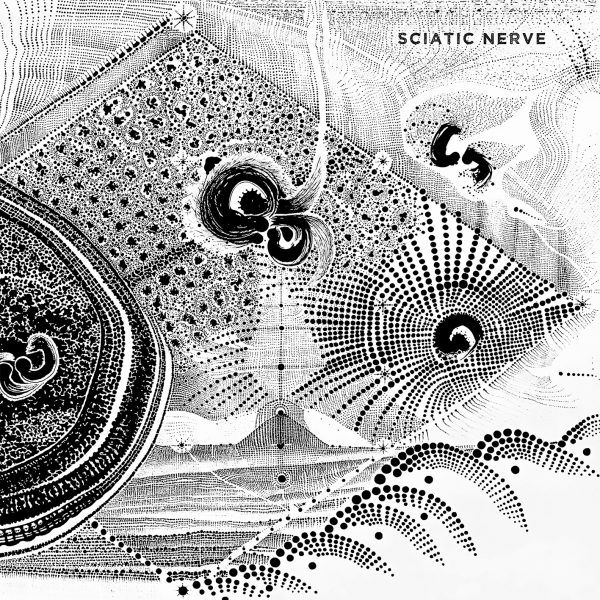 Sciatic Nerve, a fresh new punk band out of Northern California come through with a veteran sounding debut album. Although a new project, this band is comprised of 4 punk rockers who have been touring and making music for over 15 years, in other bands such as Swingin’ Utters and Cobra Skulls. This experience definitely shines through on Sciatic Nerve’s debut album, as the Californians deliver a battering debut record, worth the attention of just about any punk fan who can get a hold of this thing.

Out of the gates, the album fires off with the 49 second banger titled “Sciatic Nerve”, announcing the bands arrival to the music world, and announcing it properly. The song is hot, fresh and crisp, well mixed and polished nicely, whilst still retaining an old school late 90’s-early 00’s skate punk sound, setting up the sound and atmosphere for much of the album well. The shredded vocals of lead singer Chris Matulich tear through the mix, with the perfect blend of abrasiveness and melody, simply belting out the words “Sciatic Nerve” over and over for 49 seconds, like many of the lyrics on the album, they are to the point, fun and pissed off throughout, delivered in true Californian punk style. Accompanied by a well worked and classic sounding hardcore backline, where Sciatic Nerve’s experience becomes apparent, featuring some lovely guitar feedback, crushing drum rhythms and a really nasty, fuzzy bass tone. In under a minute, you’ll have a taste of some very serious new punk music, something that is hard to come by these days.

After a couple of minutes of some straight up pummelling punk music, it doesn’t take too long to notice that there is a lot more to Sciatic Nerve’s game than just being great punk rock bruisers. With the song Sleep we hear a really fizzy guitar riff over some sparse and tense bass lines and percussion, reminiscent of some early Refused or Unsane, providing a great short refrain before immediately changing into a real 90’s style hardcore breakdown to close the song out. Get Away in the middle of the album is another great song that steers away from hardcore punk rock, but dips into more west coast surf punk, pulling elements from more recent bands like Wavves instrumentally and FIDLAR vocally, lasting just over a minute, this track gives great contrast and flavour to the album with some sweet and fun melody lines across all areas. The track Bright Lights is also a great example of how many weapons Sciatic Nerve have in their arsenal, by showing off some more swirling riffs with funky undertones, pulling influences from punk bands like A Wilhelm Scream, and even going as far as pulling influences from different avant-garde bands.

Across the board, on Sciatic Nerve, every song is pretty short and often rather different to the last, but this album really does captivate the listener well, and manages to remain with you for a long time. Almost every song ends abruptly, and as the next song starts, there are many times where it sounds as if it could be a different band, or at least from another time period in a bands back catalogue. The sound switches in and out from different styles an awful lot, and somehow, whilst feeling lost at times, never really feels wrong or out of place. It seems to be completely intentional, and just like many of the greatest aggressive and noisy punk rock albums of the past few decades, it’s a controlled chaos. To Sciatic Nerve’s strength they also manage to always remain sweet and catchy enough to keep this in the boundaries of a truly superb and fun punk rock album, whilst having those few moments where you get the feeling, if they had stuck with the real chaotic nature they show on some songs, it might have slipped into more darker, mathcore or powerviolence territory. But, to my personal approval, this mayhem is balanced out delightfully.

Sciatic Nerve have pulled off releasing a fantastic debut album, short and sweet with not a single dull moment. The atmosphere and sound of the record isn’t particularly anything new to the world of music, and although the lyrics aren’t sending out any urgent messages a seminal ground-breaking record might need to, they are fun, angry, and suit the sound of the album perfectly. With plenty of sunny, bright and unusual punk elements throughout the album, balanced alongside their more destructive moments, Sciatic Nerve steer clear of that heavier and more formulaic punk and metal sound that has been over-saturated over the years, resulting in a refreshingly authentic sounding punk album.

Highlights: Sciatic Nerve, Get Away, Dogs, With Who You Go.