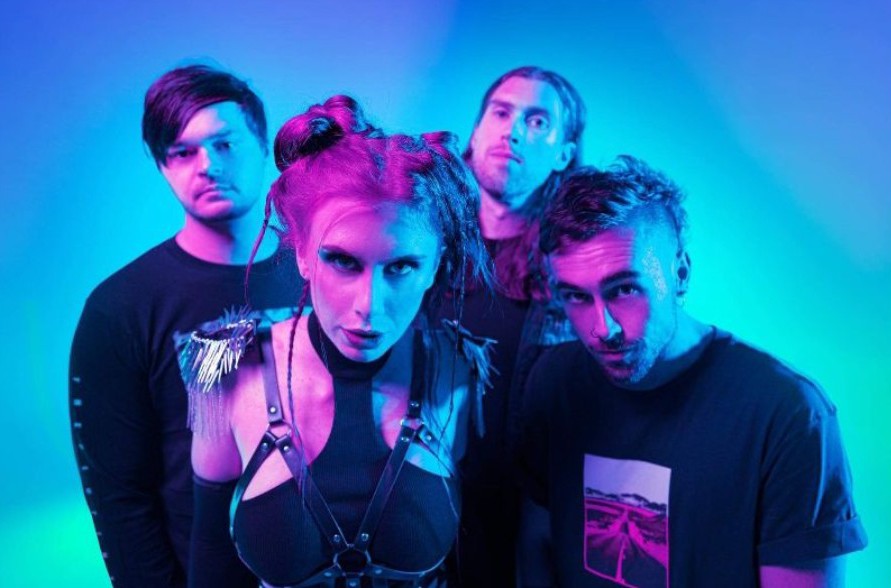 REDHOOK
Fresh from making their critically acclaimed live debuts at Australian festivals UNIFY Gathering and Groovin’ The Moo and polishing off their biggest ever national headlining tour, Eora/Sydney alt-rock force RedHook have returned with their most gut-wrenching single to date, ‘Jabberwocky’, produced by Stevie Knight (Stand Atlantic, Yours Truly) and mixed by James Paul Wisner (Underoath, Paramore).

Listen to Jabberwocky by clicking the image below.

‘Jabberwocky’ is an intensely personal song that addresses vocalist Emmy Mack’s experience of being sexually assaulted while on RedHook’s first ever overseas tour.

Using the metaphor of the Jabberwocky (a fictional monster from the Alice In Wonderland mythos which in the Irwin Allen film adaptation Alice is ultimately able to vanquish by convincing herself it doesn’t exist) the song centres on Emmy’s coping process of denying her own trauma and the monster who inflicted it in order to effectively “go on with the show”.

Emmy explains the inspiration behind the track:

“As difficult as this song was to write, I felt like it was something I had to do.

One of the main ways I cope when horrible things happen in life is by listening to music. But when this happened to me, for the very first time, I couldn’t find a song that resonated with what I was going through. Isn’t it strange that we’ve heard so many stories about high-profile male predators in the heavy music space over the past few years, and yet there are so few songs in the genre that deal with sexual assault itself from a female perspective? I really wanted to help change that.”

RedHook will support the release of ‘Jabberwocky’ with their second ever tour of Europe in June, including their debut appearance at one of the world’s most iconic rock festivals Rock AM Ring/Rock im Park alongside the likes of Green Day, Muse, Weezer, Turnstile, Gang Of Youths & Spiritbox, as well as multiple dates supporting The Faim throughout the UK, followed by a 28-date, three-month-long regional tour of Australia as main support for In Hearts Wake, and an appearance at Sydney All Ages festival Shoreshocked alongside Beddy Rays and The Rions.

This continues on from a freshly completed national ‘Bring Ya Mates’ tour with The Dead Love and appearances at UNIFY Gathering, Groovin’ The Moo and Halloween Hysteria. The band have previously sold-out national tours and performed at festivals Download (UK), Download (AUS), Good Things, BIGSOUND and Stonefest.

2021 saw RedHook release their long-awaited debut EP ‘Bad Decisions’ which has ticked over 7 million Spotify streams and earned praise from Kerrang! (UK), Rock Sound (UK), Rolling Stone (AUS), Hysteria Magazine and has been nominated for AIR’s Independent Music Awards 2022, with multiple video clips being added to rotation on ABC’s Rage. Lead single ‘Bad Decisions’ has also clocked 5 million Spotify streams and has just been announced as a finalist in the International Songwriting Competition and featured on Spotify’s ‘The Best Of The Rock List 2021’ alongside huge songs by Machine Gun Kelly, YUNGBLUD & more. Previous singles have been added to rotation on triple j, along with further radio support from SiriusXM (USA), Kerrang! Radio (UK), triple j Unearthed, The Faction, 4ZZZ and Aussie Music Weekly.