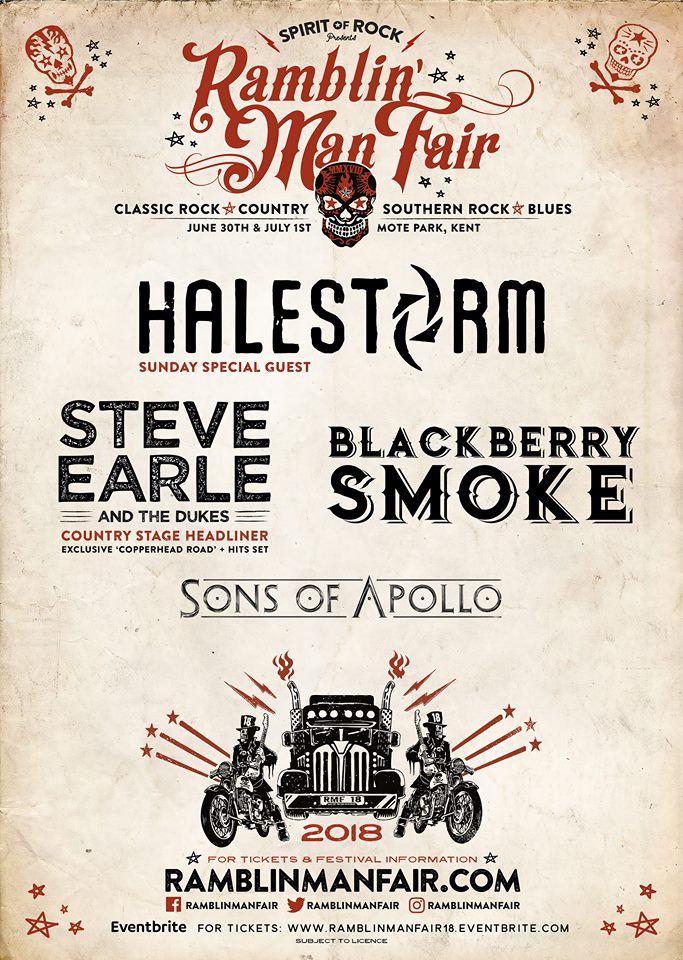 The wait is over Ramblin Man have revealed a little of what’s awaiting us at the Fair for 2018, judging by the acts announced the Ramblers heading to Mote Park in 2018 are in for a treat.

Special guests for Sunday At The Fair, led by the charismatic Lzzy Hale, they are Grammy Award winners and one of the most exciting rock acts of recent times. Hailing from Red Lion, Pennsylvania and bringing their brand of infectious hard rock and a mesmerising live show to next year’s Fair none other than the one and only Halestorm. Who doesn’t love a bit of Halestorm, right?

His songs have been recorded by likes of the Man In Black Johnny Cash, the outlaw of country Waylon Jennings and the legendary Emmylou Harris. He is one of the most prolific songwriters of our time, an actor, an author, playwright and poet with a career spanning over 40 years it’s a UK exclusive. Headlining the Outlaw Country Stage and playing the iconic Copperhead Road in it’s entirety and much, much more it’s none other than Steve Earle & The Dukes….

Next brothers and sisters we have from Atlanta, Georgia, you wanted them so we went out and we got them! Bringing a heavy slice of southern rock to the Fair the much loved and seriously rockin’ and rollin’ Blackberry Smoke.

So to end round one of the Ramblin’ Man 2018 announcements we have the super group of super groups featuring Mike Portnoy, Billy SheehanDerek Sherinian, Jeff Scott Soto and Ron ‘Bumblefoot‘ Thal none other than Sons Of Apollo.

Grab your tickets at: https://ramblinmanfair18.eventbrite.com/?aff=facebook

For more info head to: