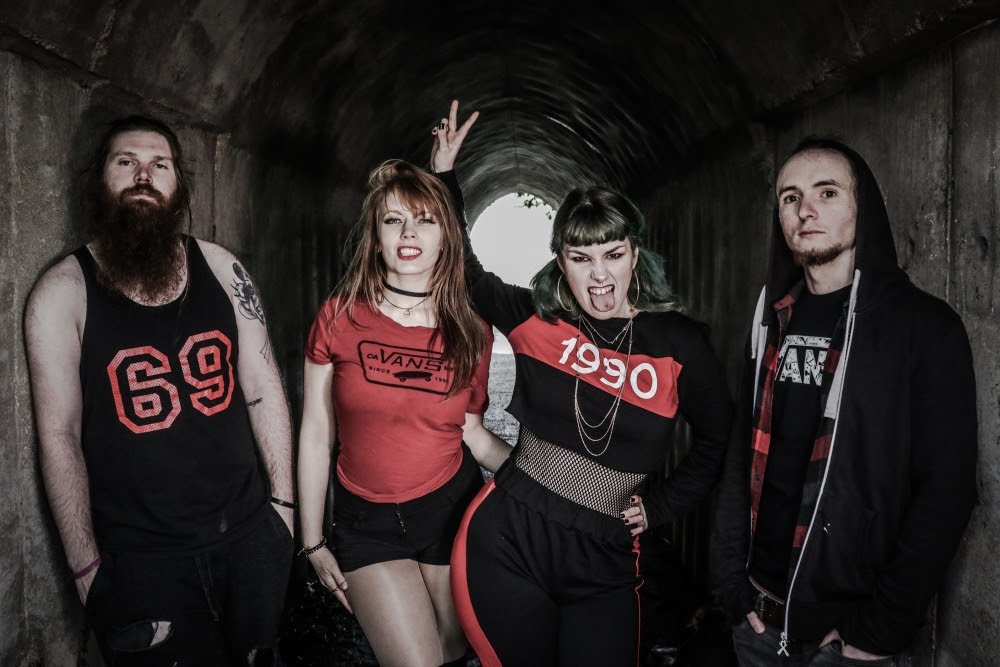 With frontwoman Louise Body at the helm both in front of and behind the camera for their latest video, Pretty Little Enemy have unleashed their renown creativity, making full use of some fantastic locations to put together the video for what is proving to be their most successful single so far. The band invites you to enjoy the full video below:

Pretty Little Enemy want to Never Say Goodbye to you!

Pretty Little Enemy most recently teamed up with infamous shock rockers Electric Six for a sold-out show in Bristol, the latest in a long line of incendiary live performances, solidifying their reputation as one of the UK’s most entertaining unsigned bands.

Continuing her adventures behind the camera, as part of the build-up for the release of Never Say Goodbye’s video, PLE’s leading lady Louise got creative with two-thirds of the rest of the band to come up with some instrument playthrough videos.

Featuring bassist Jason Coles in the first and guitarist Georgia Bell in the second, these tutorial/focus videos bring a great new focus to what has been a very successful song for Pretty Little Enemy. They are also very far from your standard studio or “in front of a computer” playthrough, as you will be able to see from the clips themselves. Check them out below:

Pretty Little Enemy’s very own Louise Body talks about ‘Never Say Goodbye’,“Following on from our previous EP, we’ve been knuckling down and crafting songs that we are really proud of. We chose to lay down Never Say Goodbye first as it’s a catchy rock-pop infused sing along which toys with your heartstrings. It touches on the subject of grief and the overwhelming and difficult process of moving on. We had a blast recording this and we can’t wait to share the next step of our journey with everyone.

“Never Say Goodbye is available to stream or purchase from iTunes, Spotify, Amazon, Google Play and all other good retailers. The full music video for the track will be released very soon – so watch this space!