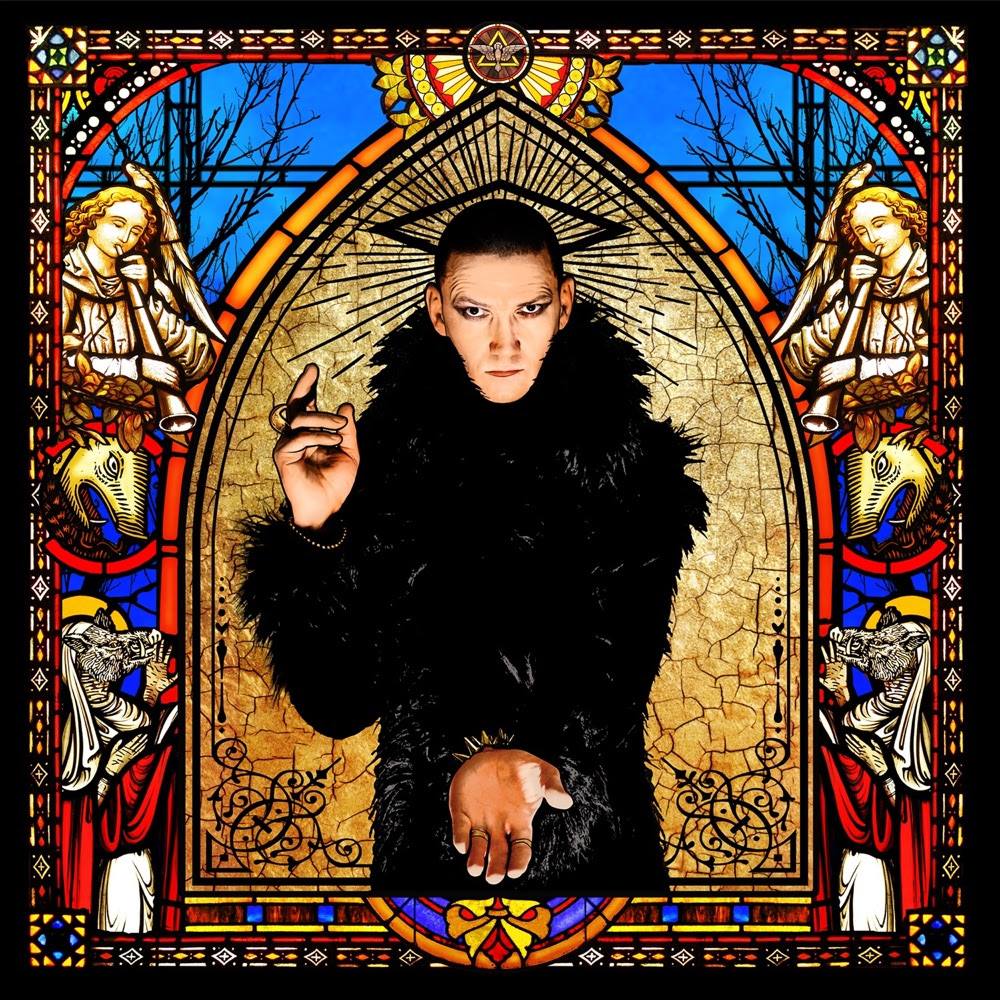 Having released the well received remix album ’Swine & Punishment’ and ‘Prey & Obey’ EP in 2017, the sting in this ring of roses is ‘Risen’, the new album by PIG. A throbbing resurrection, it is a sigil for the age of change where all is different but the same….the old poison in new stained glass.

Songs such as ’The Chosen Few’ and ’The Cult Of Chaos’ depict a world where truth is sin, while the ‘Loud, Lawless & Lost’ describes those who prey and obey for ecstasy and exorcism. ‘Morphine Machine’ brings a little more glam from the ham with additional vocals and guitars courtesy of Tim Skold (Marilyn Manson, KMFDM, Motionless In White), while other collaborators include Ben Christo (The Sisters Of Mercy, Diamond Black), Z.Marr (Combichrist), En Esch (KMFDM) and Oumi Kapila (Filter).

‘Risen’ is The Revelation designed for the digital age, the sound of PIG squealing on the spit to your inner sinner….all shine, no shame and no shit.

In 1986 Raymond Watts awoke in West Berlin. It was a time of terror and turmoil, in a city so depraved and decadent that the East Germans had walled it in. Watts had cut his teeth on tape loops in London and Hamburg, but inspired by Berlin’s fetid air and his first 8-bit sampler, he gave birth to PIG in 1988. By this time he had already written and recorded the first KMFDM releases with En Esch and Sascha Konietzko, while also delivering the sonic slaughter of Einstürzende Neubauten, Psychic TV, Die Haut and more as a live and studio sound engineer and producer.

PIG was cut from the belly of Watts with a rusty screwdriver in a basement opposite The Wall. The first squeals were committed to tape and saw the light of day as ‘A Poke in the Eye’, which was released by the US label Wax Trax!. After writing the music for the second KMFDM album, Watts slipped away to tour with Foetus, playing keyboards and guitar. He returned to Berlin to produce (with Jim Thirlwell aka Foetus), the classic PIG 12”, ‘Sick City’. Under the name 2 Kut he also made a series of 12”s that featured the likes of Blixa Bargeld and Thirlwell.

When The Wall collapsed, the party was over. Watts returned to London and PIG albums poured forth: ‘Praise The Lard’, ‘A Stroll In The Pork’, ‘Shit For Brains’, ‘Red Raw & Sore’ and ‘The Swining’. Watts programmed, produced and performed them all, ploughing a lone furrow until Karl Hyde, singer and sinner with Underworld, came to his assistance on guitars.

By this time, Watts had also developed a taste for all things Japanese. His label was based there, his morals were parked there and PIG had toured there many times. He was soon involved with a bunch of ne’er-do-wells called Schaft. An album and a sold-out tour followed.

In 1994 PIG opened for NIN, which led to the next album, ‘Sinsation’, appearing on Trent Reznor’s Nothing label, before a return to Wax Trax! for ‘Wrecked’. Watts also rejoined former cohorts Esch and Konietzko for the PIG v KMFDM EP ‘Sin, Sex & Salvation’. For an ensuing album Watts took over writing and vocal duties, spawning ‘Juke Joint Jezebel’, a crossover industrial dance hit. Remixes by Giorgio Moroder took the single to a new audience, with Watts orchestrating the chaos like a rampant ringmaster armed only with talent and tequila.

When not on tour, Watts could be found in his Ranch Apocalypse studio in London, working on the PIG albums ‘No One Gets Out of Her Alive’, ‘Prime Evil’, ‘Disrupt Degrade & Devastate’ and ‘Genuine American Monster’, plus the KMFDM album ‘Symbols’. A return to Toyko saw Watts form the band Schwein with Konietzko and Japanese stars Sakurai and Imai. The albums ‘Schweinstein’ /‘Son Of Schweinstein’ and a tour ensued.

After releasing the PIG album ‘Pigmartyr’ (‘Pigmata’ on Metropolis), Watts spent time in London indoctrinating his piglets and initiating them into the parish of the pork. When not leading his children  down the path of righteousness, he could be found writing music for fashion and films for the likes of Alexander McQueen, Chloe, Marios Schwab, Halston and The Row. He also wrote music and did the sound design for ‘Punk: Chaos to Couture’, an exhibition at the Met in New York.

In the final show before his death, Alexander McQueen commissioned Watts and John Gosling, Watts’ old partner-in-crime from Psychic TV days, to embellish the serene instrumental track ‘Inside’, from ‘Genuine American Monster’. This became the fluid soundtrack to what is seen as McQueen’s masterpiece, ‘Plato’s Atlantis’. This show was reprised as the finale of ‘Savage Beauty’, the McQueen retrospective that broke all records at the Met in New York and the V&A in London. Watts also wrote other original music and did the sound design for this show.

In 2015, PIG dipped his trotter in the trough once more, releasing both the PIG v Primitive Race EP ‘Long In The Tooth’, and the ‘Compound Eye Sessions: PIG v MC Lord of the Flies’ (aka Marc Heal of Cubanate). The Primitive Race collaboration brought together Watts and Mark Thwaite (The Mission, Tricky and Peter Murphy fame). Together they set about writing what would become the main column of misery around which the most recent PIG album, ’The Gospel’, was built. Watts’ newest partner in swine   Z.Marr (ex-Combichrist), shared production and writing duties. ‘The Gospel’ contained a dozen songs of ruin, redemption, resolution and resurrection. This tale of grime and punishment also saw En Esch and Guenter Schulz (another regular collaborator) leave their unmistakable trail of greasy fingerprints.

May 2017 saw the release of ’Swine & Punishment’. A companion remix album to ’The Gospel’, its contents were reworked by Mortiis, Chris Vrenna, Oumi Kapila, Skold, Marc Heal, Kanga and more. This was followed by an EP entitled ‘Prey & Obey’, the title track of which reunited Watts with Marc Heal and Phil Barry (both Cubanate). Other songs were co-written with Ben Christo (The Sisters Of Mercy, Diamond Black) and Z.Marr (formerly Combichrist).