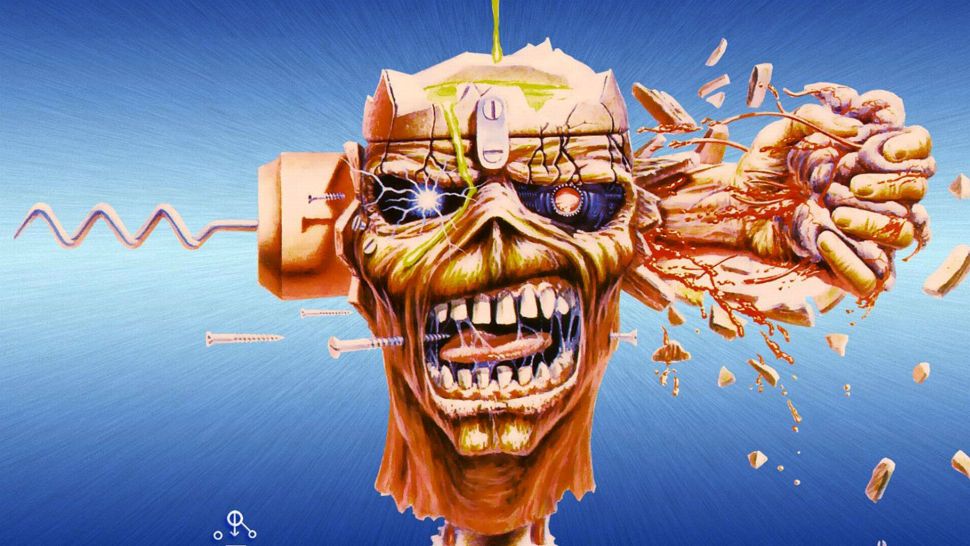 Iron Maiden have always been my favourite band. So, here’s my order of Iron Maiden studio album’s in ranked order. Of course, the opinion here is my own personal one. Iron Maiden formed a mere 45 years ago and are headlining Download again this year, still as fresh as ever.

So, in last place is Virtual XI (1998)
Yes, I know it’s the easy choice but let’s face facts. It’s not the best album ever it is? In fact, dare I say it is around the time of this album that I realised the favourite band status was slipping down from this position to lower down the pecking order. If this was a film it would be Police Academy 5, great characters but well – no memorable moments. Even for me, The Clansman couldn’t fix this. I couldn’t help but think it was The Trooper after Braveheart had been watched. I imagined Steve running home with his pad and pencil on his lap images of Mel Gibson still firmly in his mind. The Angel and The Gambler should be good but is too long and has that weird sound that resembles Felix the cat jumping on the keyboard.

In second last place and maybe unfair to Blaze is The X-Factor (1995)
Don’t get me wrong, I love Blaze Bailey. As a massive Wolfsbane fan (since I saw them supporting Maiden) I think the dude has a belter of a voice. I just don’t think the songs supply the killer pass to him. Some songs are brilliant. Man on the Edge and Sign Of The Cross are pure undiluted Maiden. However, with songs such as 2 AM and The Unbeliever, The X-Factor has more fillers than Catherine Ryan. And the cover’s crap. Nearly as bad as Dance of Death. And speaking of number 14 on my list…

Dance of Death (2003) is in fact a good album but the cover resembles a GCSE art work project from a teenager who likes Iron Maiden and lacks creativity. Pashendale, No More Lies and Rainmaker (why wasn’t the cover of the single, the cover of the album?) are splendid indeed. However, as a Maiden fan I expect to listen to the latest offering for hours, days, even weeks constantly after release. Dance of Death was good but quite simply, not great.

Fear of the Dark (1992) is at number 13. Which may be unfair as it is a weaker album than Dance of Death. To me music is a personal thing and the time and the place brings back memories of this album.
Yes, I know everyone loves the title track at a live gig (I still think they could occasionally substitute it for Killers and the album cover was an evil tree) but the reason this album is so far down my list is Chains of Misery and Weekend Warrior. Afraid to Shoot Strangers and Be Quick or to Dead are class indeed. But in comparison to other album’s further up this list the difference is clear. When I listen to this album start to finish,I immediately replace it with another Maiden album and don’t hit the replay button.

Right, this is where I may get jumped by an angry mob of Maiden fans who tell me I have got it very, very wrong but at number 12 is A Matter of Life and Death (2006).
Should this album be higher, perhaps but come on people. We are talking about the best band in the world and being number 12 isn’t too bad is it? It was a darker album and I still don’t know if playing it live in its entirety was a good call or not. However, These Colours Don’t Run and The Reincarnation of Benjamin Breeg (not Button) were immense. Should it be higher? Possibly. But we can argue over that over a pint of Trooper ale. Right now, this is where it belongs, right behind

No Prayer for the Dying (1990)
Yes, this album is not as good as maybe, well any of them but like I said before music has a sentimental value and I remember sitting on a train returning from Our Price staring at the album cover, looking forward to get back to my house and play it constantly. Unlike the Maiden masses I love Holy Smoke and Hooks in You. And my arm can clearly be seen in the Bring Your Daughter to The Slaughter video. Does that make me biased? Yes, it does. But like Eddie in a graveyard I don’t care. This was the time for me I saw them on tour with both Anthrax and Wolfsbane. This was when it was confirmed Iron Maiden would have a place in my heart forever. Even though it contains Mother Russia. Okay, maybe I have been a little over generous.

Next up is the superb Final Frontier (2010) and what an album it is.

When The Wild Wind Blows and Coming Home are simply sweet. El Derado may sound like a Maiden tribute band putting in every Maiden song in a Maiden generator and coming out with this Maiden classic but I like it. So there. The cover may not have been as good as A Matter of Live of Death but it had an alien, a screaming dead astronaut and some sort of weird white key thing in it – what’s not to like? Apart from maybe the intro to Satellite 15..The Final Frontier.

Up next and at Number 9 is the Book Of Souls (2015) the latest offering from the Maiden Machine.
Yes, every song appears to have Fergie Time included and Empire of The Clouds is beyond ridiculous. However, although The Red and The Black is like The Trooper on speed it’s brilliant. Tears Of A Clown is poignant and beautiful, Speed of Light has a cowbell (although it disappears) and If Eternity Should Fail is pure class. Well done Team Maiden. I love this album, even though the songs are the length of January.

Pipping the post at number 8 is the best comeback since Rocky III, Brave New World (2000).
With Mr Dickinson returning, bringing with him a returning Mr Smith this album was indeed everything that we wished for. Any album, in my humble opinion that contains Dreams of Mirrors, Blood Brothers and The Wicker Man is amazing. Yes, some tracks weren’t classic but Maiden were back with a bang. Eddie was not only in the clouds but back on everyone’s lips. It was great times to be an Iron Maiden fan. Things were looking up as Eddie was looking down.

Things are getting heated now, and for me the next album is their debut, self-titled Iron Maiden (1980). I was only 7 when this was released so I would be lying if I told you I was a fan when it was released. In fact, I think my first introduction to this was the Lucozade advert with Daily Thompson. But with the haunting Remember Tomorrow, the stomping Iron Maiden, the identity of Running Free and the riffs of Charlotte the Harlot this album was one of the best debut albums of all time. In my opinion, this Queen I, Appetite for Destruction and Autumn and Everything After are the strongest debut’s ever. But their second album was equally incredible. In fact, I think it was a little better even.

Hence Killers (1981) is Number 6 in the best band in the world’s countdown.
Wrathchild is the only staple in this album on the live circuit but I always think Killers should be too. Murders in the Rue Morgue is simply song-writing at its best, Drifter is class and the album cover screams heavy metal more than any album cover ever. It’s Eddie as his meanest and best. It’s a regular on the Pete K Mally jukebox when I’m pottering through the house. An album with not one, no, not one crap song. A rare occurrence in this music world indeed.

This next album is one of my favourites and I don’t care if I can’t walk in my home due to hate mail stating that I’m wrong. Somewhere In Time (1986) is a thing of beauty. Wasted Years, Heaven Can Wait are staple ingredients in a live show but songs such as Caught Somewhere in Time, Stranger in a Strange Land and Sea of Madness are timeless. Alexander the Great is what all history lessons should be. Eddie is a cyborg and had a 6 pack. When I die, I want this album played at my funeral. And maybe that could be closer than I want if some of you guys disagree with my choice. Somewhere In Time is brilliant. I love it. Even though Bruce wore a codpiece on this tour I forgive him. That’s how good an album this is.

Right we are in the top 4 so hold on to your beanies and enjoy the ride. The 4th greatest album from the world’s greatest band is in fact Piece of Mind (1983).
Die With Your Boots On is one of my favourite songs ever, and with The Trooper, Flight of Icarus and Where Eagles Dare what an album this is. In fact, I even really enjoy Sun and Steel. And before you look for my address and get some dog poo in the post think about it. This would be one of the best songs on Fear of the Dark. So, welcome Mr McBrain. What a welcome.

The top 3 is an exciting time. And in this incredible third position is in fact Powerslave (1984). A beautiful crafted cover co-ordinating with a flawless album. Aces High, 2 Minutes to Midnight and Powerslave fill this album with the familiar Maiden horse galloping style. It’s a powerhouse of an LP. Short at 50 minutes perhaps but here lies a lesson to make an exciting well-crafted piece of work.

Number 2. Here it is and Number of the Beast (1982) is immense. Shorter by ten whole minutes than Powerslave but every song is a diamond. Every song. No fillers here, thank you – yes, even Gangland is good. But wow. The artwork, the concept, the introduction of Bruce (Good Game, Good Game). Just in case you haven’t listened to this album for a while please let’s remind ourselves. Invaders followed by Children of the Damned, followed by the Prisoner , then 22 Acacia Avenue (the sequel to Charlotte the Harlotte), followed by Number of the Beast, followed by Run to the Hills, then Gangland (okay, I retract my comment) then Hallowed Be Thy Name . Wow. Just wow. So how come it’s in silver position, you ask?

Because brothers and sisters, boys and girls Seventh Son of a Seventh Son (1988) is my number one

Is it as good as Number of The Beast or Powerslave you ask? Possibly not. But for me, life is full of moments. And if my life had one soundtrack only it would be this album. The time it was released I was 15. This album signposted my love of rock music. 8 songs of ultimate awesomeness, a concept album (I think – I never knew what the concept was but it didn’t matter). The single covers of Can I Play With Madness, The Evil that Men Do and The Clairvoyant were works of art. This album to me is the reason I love rock music. It’s the reason I grew a mullet, the reason I DJ, the reason I still run down the street listening to Moonchild at the age of 46 and pretending I’m Bruce Dickinson while squatting down and then lifting my arms in the air.
Thank you, Iron Maiden for your music. Long life Eddie. Here’s to album 17 to 25