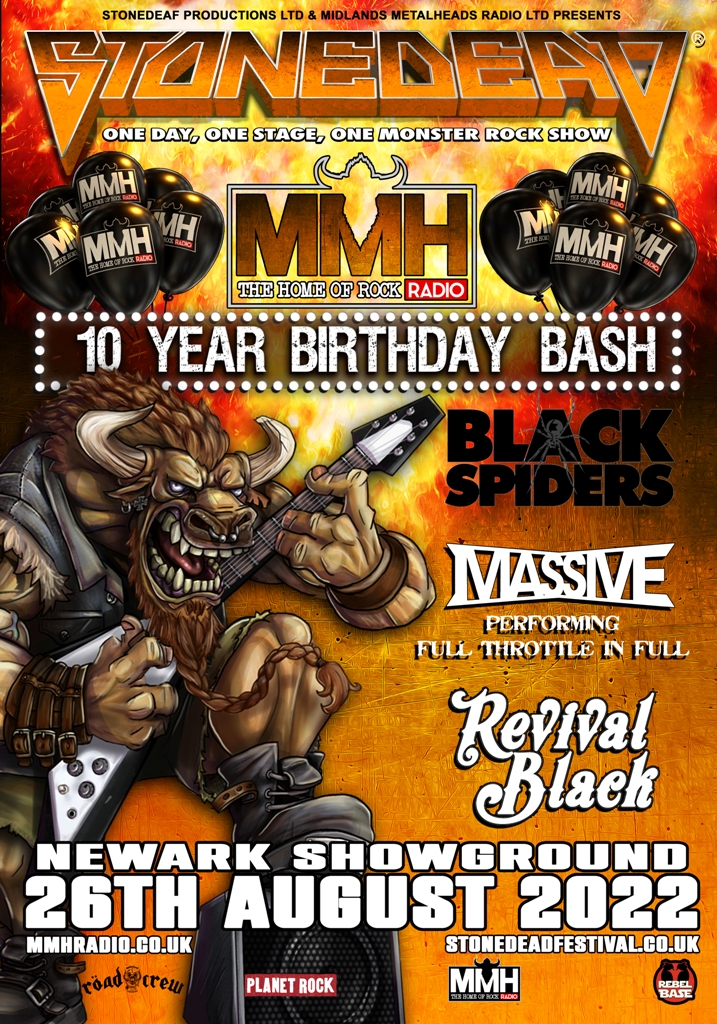 To kick off Stonedead Festival 2022, MMH – The Home Of Rock Radio are bringing one huge party with 3 bands to start the Bank Holiday Weekend in style. With DJ sets, competitions and more! On Friday 26th August 2022 Newark Showground

Helping MMH – The Home Of Rock Radio celebrate their 10th year anniversary. Formed in 2008 Sheffield based English rockers described by Metal Hammer Magazine as being able to ‘bring the party and they bring it hard – one of the finest live shows on the British circuit’ Black Spiders offer fast paced high- energy, feel-good rock n’roll, contrasted by demonic doom. With their self-titled album Black Spiders (2021) reaching No 7 in the independent album chart. Black Spiders are: Pete Spiby (guitar/vocals) Ozzy Lister (guitar/vocals) Adam Irwin (bass) Mark Thomas (guitar) Wyatt Wendels (drums). Having previously played at Download, Hard Rock Hell, iTunes, High Voltage, Sonisphere, Graspop, and Bloodstock festival to name but a few. We know that FUBS will rule the roost on the Friday night.

Thwarted by coronavirus for 2020 and 2021 we are delighted to bring back Massive Aus to Stonedead Festival. This time they will be providing the ‘full throttle’ experience in full on the Friday night. The Aussie beer drinkers and party hard rock’n’rollers give their absolute best each and every time they take the stage. Drinkin’ beers and smashing ears. Massive are: Brad Marr (vocals, guitar) Ben Laguda (lead guitar, backing vocals) Brenton Kewish (bass) Andrew Greentree (drums)

Classic sounding hard rock band Revival Black strike out of the cultural heartland that is Liverpool, England. Kicking us off in style with their own brand of honest rock n roll, drawing upon the classic sound of the 70’s with a strong foothold in the modern day, Revival Black have firmly planted themselves within `The New Wave of Classic Rock` family. Revival Black: Dan Byrne (vocals) Alan Rimmer (lead guitar) Adam Kerbache (guitar) Jamie Hayward (bass) Ash Janes (drums)

AND THE OPENING POLL WINNER FOR 2022

Michael Schenker will be celebrating 50 years in the business, 40 of which as a solo musician, meaning The Michael Schenker Group will be playing a special 50th Anniversary Show and will take Newark by storm! With his iconic black and white Dean Flying V and what can only be described as a supergroup surrounding him, they will bring us a headline show to remember. Over his extensive career, Schenker is well known for his time in The Scorpions and UFO before forming the Michael Schenker Group in 1979. Post the iteration of Michael Schenker Fest with two albums in 2018 and 2019, MSG re-formed in 2020 bringing their latest album ‘Immortal’ to our attention early in 2021, even featuring a track by the name of ‘In Search Of The Peace Of Mind with Schenker himself stating it to be his 50th anniversary celebration song as it holds much meaning, being his very first musical composition at the age of 15.

With The Wildhearts classic line up of Ginger, CJ, Ritchie and Danny still holding strong, this creatively brilliant band who helped change the landscape of British rock through the 90s are showing no sign of slowing down. Currently on tour showcasing their brand-new album released earlier this month, 21st Century Love Songs, The Wildhearts and their incendiary shows have cemented their reputation and legacy as one of the best bands the UK has ever produced. On speaking of their new album, Ginger Wildheart himself exclaimed “This is where I become a fan of the band, when we ditch the rule book and just follow our instinct. Sarcastic, fun, angry, proud, experimental and belligerent… this is the sound of the band in their natural habitat. This time we’re in control.” With over 30 years behind them, several top 20 singles and a top 10 album, The Wildhearts are ready and raring to go with their collection of British hard rock – so get ready for them to rock your socks off!

After welcoming back Kenny Leckremo on vocals H.E.A.T. will bring their adrenaline fuelled melodic rock to Stonedead Festival. The Swedish Rockers dug deep with their self-produced heavier sounding 6th album H.E.A.T II, released to critical acclaim, bringing powerful high-octane vocals and a huge sound. The album has gained plaudits worldwide, returning to a heavier style and cementing their place in the Melodic Rock genre.

English rockers THE TREATMENT formed in 2008 with a powerful blend of guitars, catchy choruses, with strong vocals. They have supported Kiss, Mötley Crüe and Slash. In 2019 the band took on a radically different style and released ‘Luck of the draw’. The band will be bringing the party and their loud fresh sound will resonate with STONEDEAD fans, especially for those who have had them on the wish list for quite some time.

TYGERS OF PAN TANG originally from Whitley Bay fully capture the raw spirit of classic NWOBHM. Tygers of Pan Tang bring their full swagger with galloping riffs, squealing guitars and a solid base for our pleasure and enjoyment.

THUNDERMOTHER this Swedish high voltage band have one aim rock’n’roll world domination. Bringing a mix of blues, punk, heavy metal which all weave together to bring the THUNDERMOTHER rock’n’roll experience. Think AC/DC, Motörhead with fresh modern rock with a 70’s groove.

Stonedead Festivals stellar line-up suits both classic and new rock fans in providing a unique one day, one stage festival where the music is loud, the beer and food are priced competitively, and you can camp / park 5 minutes from the level ground arena. We have a dedicated covered wellbeing area with seating! We allow alcohol to be brought into the arena – 4 cans of ready mixed spirits or beer / cider / wine.