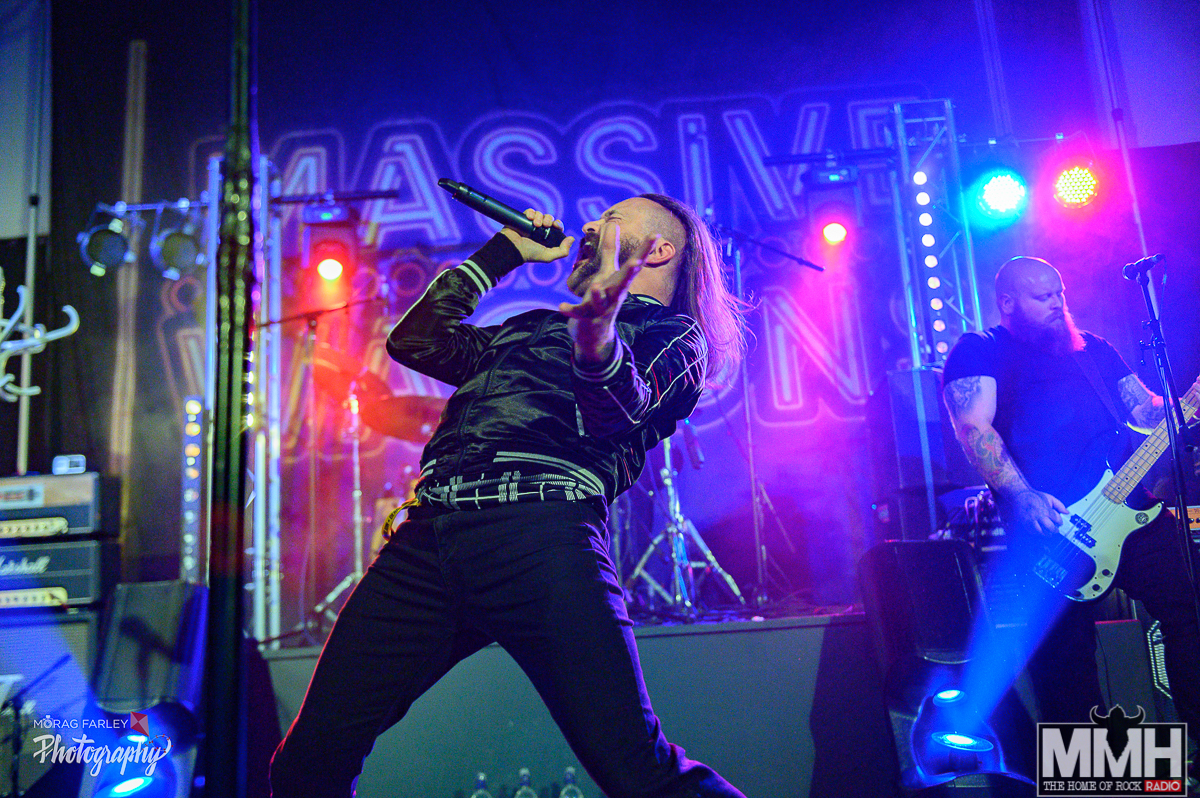 The Patti Pavillion in Swansea is the setting for tonights gig and what a venue it is. This beautiful historical listed building sits by Swansea Bay. Big Day Productions   have picked the perfect setting for this Sunday evening’s gig.

This is the third consecutive weekend that I have seen Ravenbreed perform and what can I say, there is a noticeable change each week.  Already proven to have a strong live performance, they seem to be going from strength to strength each time, growing in sound and performance. Zoey leads the band with an air of confidence. 7pm on a Sunday evening has never been so rock n’ roll. The energy, stage-craft, music ability and good song writing gives the Swansea crowd a real treat. Believe me, if anyone in this crowd are new to Ravenbreed they are now converted fans. Their half an hour set was fuelled with great riffs and amazing vocals. Finishing off with their anthem ‘Falling Away’ Ravenbreed came and conquered.

Next up are the local Boys Scarlet Rebels and from early on their popularity can be seen by the vast amounts of t-shirts on display. Scarlet Rebels are showing off their new album ‘Show your Colours’ and rightly so. A great album deserves a great live performance and the boys don’t disappoint. With a vast back catalogue to, but with their recent name change it is evident that the Welsh wonders know what they are doing.And by jove, they do it well. Performing the iconic ‘Say My Name’ and ‘Not The One’, we were also treated to there latest single ‘Heal’ , which slowed the pace down without forfeiting the energy.

Staffordshire lads Ryders Creed are our penultimate band tonight.  I have reviewed and seen them on many occasions and look forward to see them performing each time, and perform they do! Great songs, check, exceptional music ability, check, and the showman that is Ryan Anthony Hulme holding it all together, check. Combining their professional and competent ability with a connected feeling of a group of friends enjoying themselves, they are the real deal, the full package.  Starting the set with their signature song ‘Ryder’.  The crowd participate each time Ryan sings out, fist pumping in unison with band. Their set full of songs from their debut album and then we are treated to a new song ‘How you feel?’. Many of the audience witnessed Ryders Creed put in a cracking performance at Steelhouse earlier in the year and this support slot highlighted that Ryders Creed put in a shift, be it large summer festivals or in beautiful historical music venues in Swansea Bay.

Ending the set with the epic ‘My Life’, they have given a stand out performance and have accepted and achieved their mission to get the crowd fired up awaiting the headline act.

Pete K Mally once again takes to the stage to give the Wagons the build up they deserve, and to also give thanks to such an impressive venue, Aled from Big Day Productions, Charley and Morag Farley, lighting, sound and bar staff, we are truly witnessing something special here and the birth of a new Holy Grail on the live venue circuit.

Onto the stage they come, or bounce in Baz’s case.  Starting the set with ‘Rising Tides’, but wait, where is Baz’s signature bowler hat? There it is, on a white painted coat stand to the side of the drum riser. One can only imagine the scene of how it got there, I am hoping it was done Bond-stylee as if entering the office door winging its way past Moneypenny!

The energy coming from one band is akin to the national grid during an ad break for Corrie! Every single member of the crowd are on their feet, singing along. Even the bar staff have their arms in the air singing along to every word. Yes, yesterday may have been their home gig but the Wagons give all their best, all the time, every time.

The set continues to gather pace, Baz bouncing around the stage and shaking that hair like some sort of surreal Timoti advert whilst vocals remain powerful and solid. Massive Wagons do more than what they say on the tin. They don’t simply supply the Sunday evening crowd with their anthem sounds, including ‘Ratio’, ‘Billy Balloon Head’ and ‘Tokyo’ but they do it with humour, charm, theatricals and class.

Their encore ‘Fight the System’ and ‘Fee-Fi-Fo-Fum’ end the night with a bang. A Sunday evening in Swansea Bay has never been so memorable, Well done Big Day Productions. You have done Wales proud.