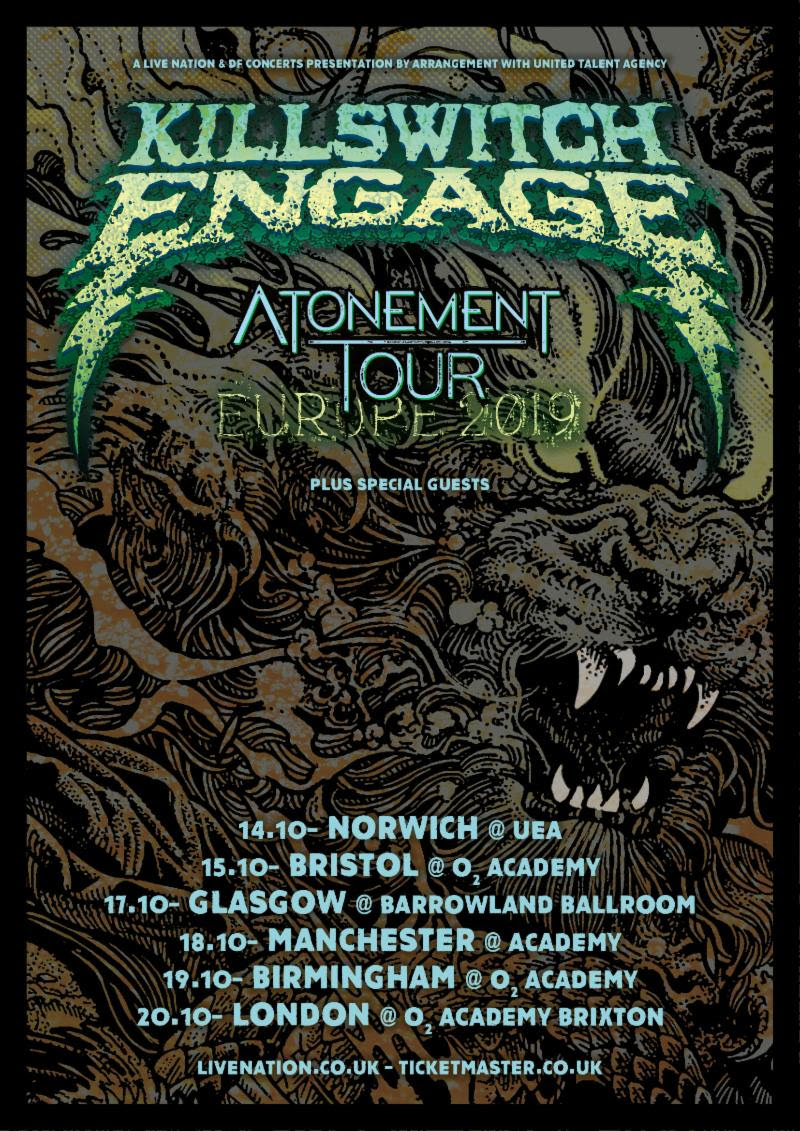 BAND PARTNERS WITH MENTAL HEALTH NON-PROFIT HOPE FOR THE DAY
NEW ALBUM ATONEMENT TO BE RELEASED AUGUST 16 VIA MUSIC FOR NATIONS
UK HEADLINE TOUR IN OCTOBER
Grammy-nominated and Gold-selling heavyweights Killswitch Engage have just shared an emotive video for latest single “I Am Broken Too”, taken from upcoming album Atonement, due out August 16 via Music For Nations. Watch the video here.
https://www.youtube.com/watch?v=tlE72MhrldA&feature=youtu.be
he full-concept video was directed by Kyle Cogan and Zack Stauffer of SIMIAN.LA (A Perfect Circle, Breaking Benjamin) and was shot in the Los Angeles area.
“The video is a reflection of real-life events that loved ones have gone through,” says singer Jesse Leach. “Kyle Cogan and Zack Stauffer did an amazing job of bringing it all to life. The result is a powerful video that captures the essence and desperation of the song.”
The band is also donating a portion of the proceeds from the song to Hope for the Day, a Chicago-based non-profit organisation that focuses on suicide prevention by providing outreach and mental health education through the use of music and art.
Atonement is available for pre-order here. KsE previously shared first new single “Unleashed.” Watch the visualiser for that song here.
“This song is very near and dear to my heart,” Leach explains. “I wanted the listener to feel the urgency, the heaviness of the topic as well as a possible connection. Many people suffer from mental illness in one form or another. I want nothing more than for people to feel like they are not alone in this struggle. There is always someone there to help, to listen, and to be there for you. Don’t lose hope and don’t let your brokenness consume you. Broken can be fixed, or at the very least, maintained. No one is alone in this fight.”
Killswitch Engage return to the UK for a headline run in October. Support bands will be announced soon, dates are below.
ATONEMENT TRACK LISTING:
1. Unleashed
2. The Signal Fire [featuring Howard Jones]
3. Us Against The World
4. The Crownless King [featuring Chuck Billy]
5. I Am Broken Too
6. As Sure As The Sun Will Rise
7. Know Your Enemy
8. Take Control
9. Ravenous
10. I Can’t Be The Only One
11. Bite The Hand That Feeds
KILLSWITCH ENGAGE U.K. TOUR DATES:
Mon 14th Oct – NORWICH UEA
Tue 15th Oct – BRISTOL O2 Academy
Thu 17th Oct – GLASGOW Barrowland
Fri 18th Oct – MANCHESTER Academy
Sat 19th Oct – BIRMINGHAM O2 Academy
Sun 20th Oct – LONDON O2 Academy Brixton
Tickets are on sale now. To buy online for the UK dates visit https://www.livenation.co.uk/artist/killswitch-engage-tickets and www.gigsinscotland.com.

ABOUT KILLSWITCH ENGAGE:
Killswitch Engage first shook the structure of heavy music upon climbing out of snowy industrialised Western Massachusetts in 1999. A musical outlier, the band pioneered a union of thrashed-out European guitar pyrotechnics, East Coast hardcore spirit, on-stage hi-jinks, and enlightened lyricism that set the pace for what the turn-of-the-century deemed heavy. 2002’s Alive Or Just Breathing became avowed as a definitive album, being named among “The Top 100 Greatest Metal Albums of the Decade” by Decibeland celebrated by everyone from Metal Hammer to Revolver. Not only did they bust open the floodgates for dozens to follow, but they also garnered two GRAMMY®Award nominations in the category of “Best Metal Performance” in 2005 and 2014, respectively, and gold certifications for The End of Heartache[2004] and As Daylight Days [2006]. The group landed three consecutive Top 10 debuts on the BillboardTop 200 with Killswitch Engage [2009], Disarm The Descent [2013], and their career high best bow at #6 with Incarnate [2016]. The latter two releases would also both capture #1 on the Top Rock Albums and Top Hard Rock Albums charts. Their total streams have exceeded half-a-billion to date. Along the way, the band has shared stages with some of the biggest acts in the world and have sold out countless headline gigs in six continents across the globe.
2019 represents another turning point. The quintet—Adam Dutkiewicz [lead guitar], Joel Stroetzel [rhythm guitar], Mike D’Antonio [bass], Justin Foley [drums], and Jesse Leach [vocals]—sharpen every side of this signature sound on their eighth full-length and first for Music For Nations, Atonement. The vision they shared two decades ago crystallises like never before as evidenced by the first single “Unleashed.”
|
cosa nostra, Killswitch Engage, MMH News, MMH-The Home of Rock Radio