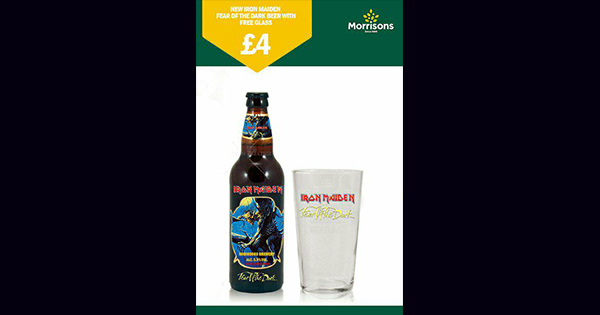 Word on the grapevine (or hop-vine to any beer enthusiasts amongst you) is that Iron Maiden are set to expand their popular beer range with a stout beer to be named Fear of the Dark after the popular Iron Maiden song of the same name. Beer of the Dark anyone?

If the previous releases are anything to go by then this will not be your run-of-the-mill stout beer. I would be very surprised, and disappointed, if it simply resembled a slightly different version of Guinness. However, until an official statement is released we can only guess at what twists on the classic formula have been used.

For any who are not already aware, Iron Maiden (particularly vocalist Bruce Dickinson) have worked in collaboration with Robinsons Brewery to create their beers, ranging from the original Trooper to the most recent Light Brigade. Now, unlike the blatant money-grabbing merchandising attempts made by other bands forays into the alcoholic drink industry (AC/DC wine? Really?) this is serious stuff. As an ale enthusiast, Bruce Dickinson has always set out to create proper beers that he would love to drink, regardless of whose name is on the bottle. I am sure anyone who has tried any of the current offerings would whole heartedly agree that Iron Maiden and Robinsons have succeeded.

Since its release, Trooper beer has sold more than 20 million pints worldwide. You can watch Bruce Dickinson talking about the original release of the first Iron Maiden beer in the video below.

The current beers on offer from Iron Maiden and Robinsons Brewery include: