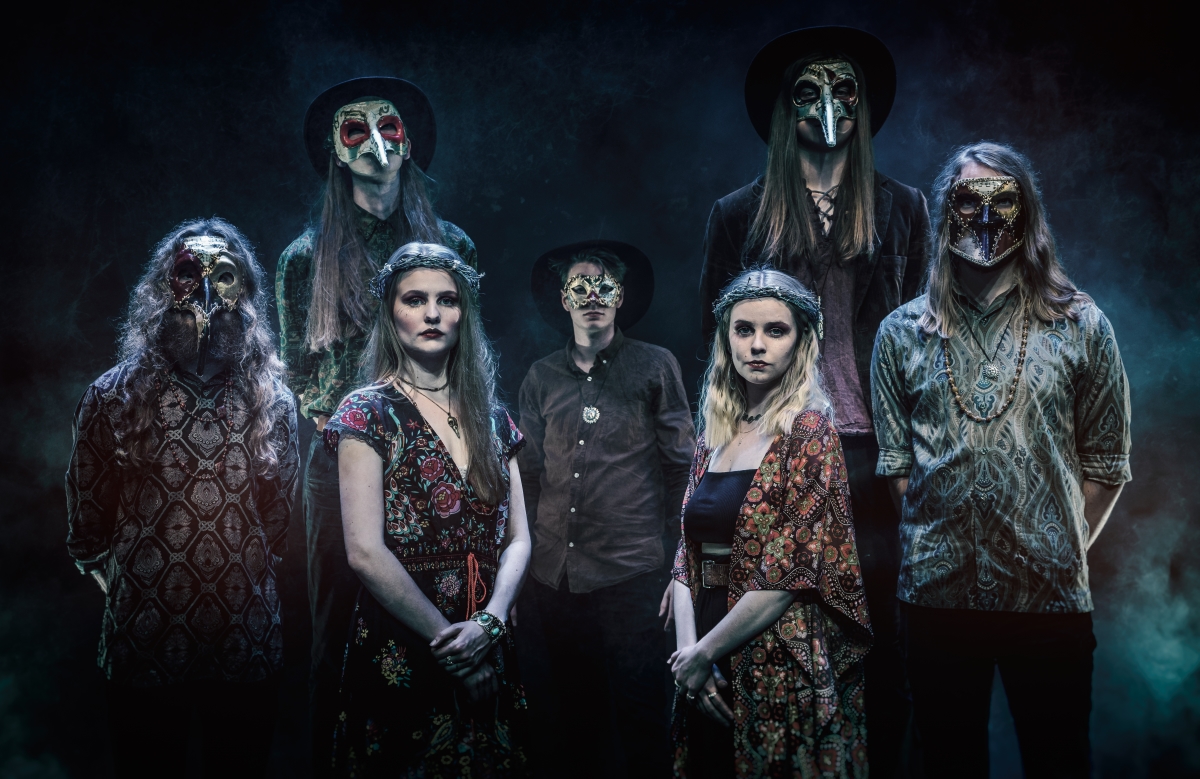 Describe your sound – If you had to describe it, what’s your style, ethos or sound like?
Intriguing, intricate… forest-rock?

How did you get together as a band?
That is a long and unfortunately not very cool or exciting story.

What are your career highlights so far?
Definitely the time we played at Hamnfesten. It’s a quite large Swedish festival, and even though we performed at the “small stage” it still felt huge. Our stage show is a perfect fit for that type of space, and it just felt right…also, we got some really great food and drinks and we’re NOT used to that type of luxury.

How has your sound evolved?
It’s more rock n’ roll now, it used to be even more psychedelic I would say.

What are your plans for 2021-22? Any live shows coming up?
Yeah, we actually do have a gig here in Sweden (Linköping, 4/8). Other than that, we’re mostly focusing on writing new music.

Do you have any band or individual preparations before you go on stage, to psych you up or get you in the zone?
For me, makeup is quite a big thing. It’s not that I love makeup very much, most of the time it’s just an inconvenience to me. But when you’re about to step on stage it’s different because it helps with character. Nephila is a whole show you know? I couldn’t imagine pulling it off without that moment of sitting down and having a chat with Josephine while we transform into something else.

How do you energise the audience in a live show?
The work starts long before you actually start performing. You gotta (try to) make sure that your material has the nerve and the dynamic it takes to keep the audience on their toes I think. Not only the music; things such as lighting, props, setlist and talks play a part as well. A common misconception I think, is that a good musician has the talent to pull anything of at any time – creating magic without even thinking about it. But that’s not necessarily true. A lot of musicians are perfectionists and what might look natural and spontaneous on stage may actually be made possible by a lot of rehearsing, rethinking and practicing. The reward is that sweet sensation of being mentally kidnapped by a moment, along with the audience. Everything flows without distraction, and the excitement never fades.

How does the writing process work as a band? Is it a joint venture? Or does one person tend to do most of the writing? Is it lyrics first or music first?
Music first most of the time. Usually, someone comes up with a riff or presents a basic idea that we try to make use of. Anyone is welcome to get involved and people contribute in their own way. But after a while, we usually split up so that me and Josephine can focus on lyrics and harmonies while the guys focus on developing and perfecting the song. We actually write quite a lot of lyrics together since we think alike in many ways.

How do you make sure you all feel comfortable with a new track?
We don’t go forth with stuff that a person doesn’t feel like they’re able to pull off. Sometimes we find a way around it and also, a lot of times people challenge themselves because they want to.

What inspires you most in writing music and/or lyrics?
I can’t speak for all of us, but I think Josephine and I are inspired by everything that feels important to us. It’s a lot easier writing lyrics when it’s something you really care about, because you know what it is that you want to say.

There are a lot of you, how would you describe your relationships within the band?
Quite Swedish. That’s up to you to interpret any way you like.
Also, we joke around a whole lot. We all seem to have a shared sense of humour.

What role did music play in your childhood/ growing up?
A big part, as it does for all kids. Music is such a natural part of being a human I think, and kids are like the most “human” humans that you’ll ever meet.

Who do you most admire on the scene at the moment, and why?
I’ll be honest with you I’m not very good at name dropping… BUT, I do know that a beloved band amongst several of us is Rival Sons.

What advice would you give to someone just starting their own band?
You’re never gonna find people who think and act exactly like you. Let go of your ego, the important thing is not where you end up – it’s creating something of substance along the way.

Which decade had the best music? Do you all agree or is it mixed?
I bet it’s mixed, but I like everything 70’s and 80’s.

How do you balance the band, recording, touring and practice, with things like work and family?
It’s all about being realistic and prioritizing I think. Sometimes you sacrifice something to focus on the band, sometimes it’s the opposite – and that’s fine. There’s no need to try and be some kind of superhuman, most of the time it just makes you annoying.

There is a saying, I don’t remember the origin but it’s quite funny to me:
“If you work as hard as you possibly can, and never give up – there are no limits as to how much you can exhaust yourself!”

Thanks so much for your time Stina! Rock on.

For more on Nephila, check them out:

Here’s a little snippet for you to enjoy!