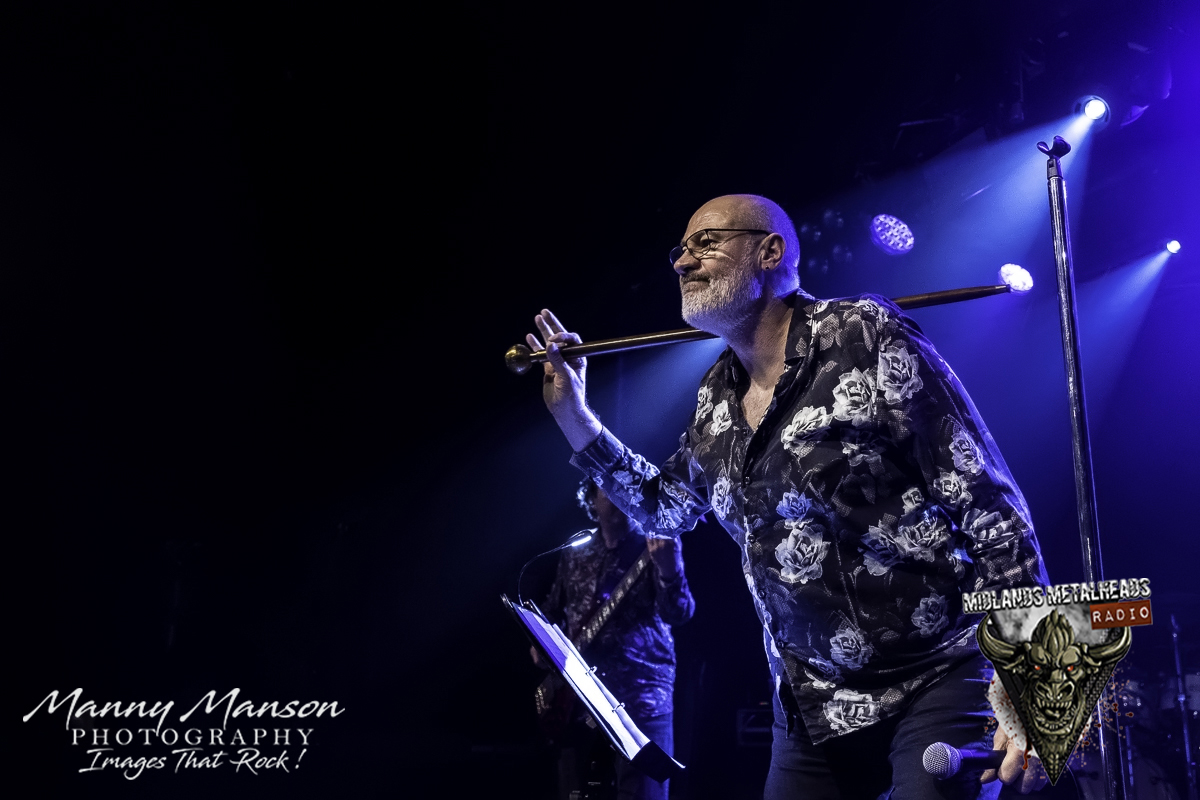 It’s been a few years since I’ve caught Fish, in fact, it’s back in the days of when he fronted Marillion. So when I got the chance to shoot him I was all over it.

Needless to say, the man is still a genius, his songs are on point. ‘Man With A Stick’ is a superb piece of work about himself overcoming his failings as he has with his various ailments, back problems etc. he sings the song with the aid of a walking stick just to get the point across. Dressed in a flowery shirt, he interacts with the crowd between each song, raising his friend, a bar stool which he tells us was secreted away from a Norwegian bar in the wee small hours, his perchance for cocaine has been replaced with lines of ibuprofen, and demonstrating he still has rock poses in his repertoire, he places a foot on the monitor in front of him to the crowds howls of laughter.

Tonight is a night of two halves, we have songs from his latest release ‘A Parley With Angels’, which I have to say should be in every Prog Rock fans collection, and the 30 yr revisit of songs from his last Marillion album, ‘Clutching At Straws’. Opening with ‘Slàinte Mhath’ has the crowd singing along immediately. That’s right, no messing the crowd are on top form tonight. finishing the night off with ‘Incommunicado’ has the place bouncing. a cracking song to finish this night down memory lane.

Fish may not have the voice of his heyday, and he’d be the first to admit it but bloody hell can he hold a show together. The sheer quality of the lyrics of every song shows what a literary genius the guy is. Show me a modern artist who can put a song together without multiple oohs and la la la’s or repeating the same words annoyingly over and over! you can’t.

Fish came, sang and conquered. The venue was buzzing with talk about the new album out next year, and as we left the building I had to buy yet another T-shirt. Yes! he was really that good!

There is a great review by fellow Metalhead Skid here

Up first we have an amazing talent that is

This pint-sized steampunk goddess wowed the audience with her own stamp on prog rock with a slight steampunk inspired set. This included the use of an Irish Whistle, which if you’re not familiar with her work comes over as interesting, It worked for Ian Anderson so why the hell not. Anyway, a short set which featured some excellent musicianship and stories of touring with Fish and Marillion back in the day, that’s the only other time I’ve seen her previously. she got the crowd on her side and warmed up ready for the big man himself!!

I’d have bought a Tee-Shirt but the card machine was being charged, huzzah! for a cashless system, next time for sure.