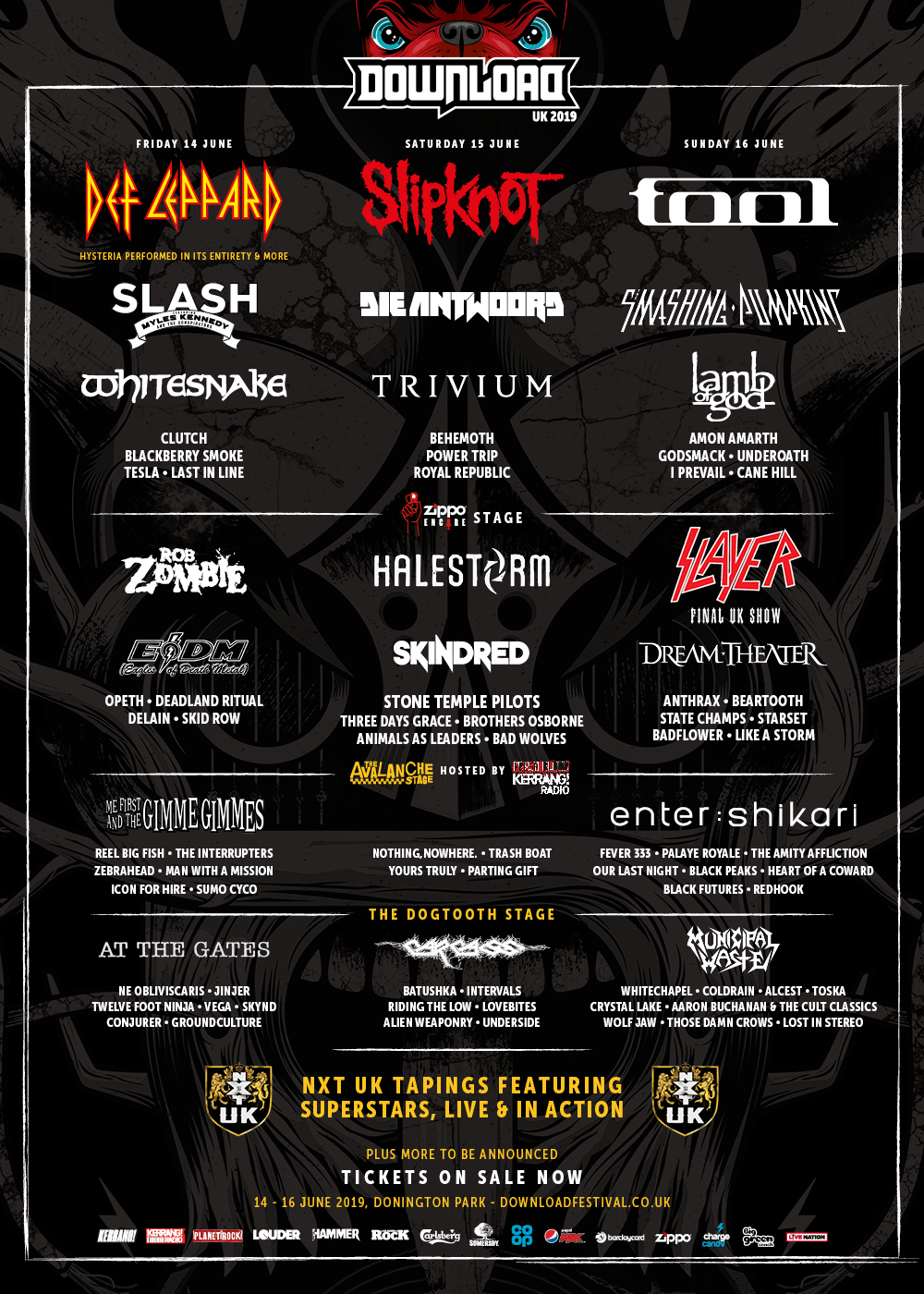 Download Festival, the champion of rock events, is pleased to welcome WWE NXT UK to the hallowed grounds of Donington Park across 14-16 June 2019, as well as SEVENTEEN further bands including supergroup Simple Creatures, The Wonder Years, and Dinosaur Pile-up.

WWE United Kingdom Champion Pete Dunne, NXT UK Women’s Champion Toni Storm, and Tyler Bate will be among the NXT UK stars parading thrilling displays of dynamic athleticism during the bonafide full-scale ring bouts in the festival arena, which for the first time ever will be taped and aired as part of the weekly NXT UK show on the WWE Network. Superstars Trent Seven, Walter, Rhea Ripley, Jordan Devlin, NXT UK Tag Team Champions The Grizzled Young Veterans, Travis Banks, Gallus and many more to be announced, will descend upon Download for a weekend of high flying maneuvers, action-packed matches and unexpected surprises. NXT has made a massive impact at the festival in previous years, performing to capacity crowds throughout the weekend, featuring impressive debuts, shocking returns and exciting moments. This is the ultimate win for wrestling fans!

Joining headliners Slipknot, Tool and Def Leppard and a host of acts already announced for the annual rock spectacle, are SEVENTEEN other amazing acts. In a UK Festival Exclusive is supergroup Simple Creatures, comprising of blink-182’s Mark Hoppus and All Time Low’s Alex Gaskarth, who will headline the Avalanche stage on the Saturday night. Known as legends of the pop-punk scene, the pair will give an unmissable exclusive and first UK Festival performance at this year’s Download. Already releasing two infectious singles ‘Strange Love’ and ‘Drug’, Simple Creatures will release their debut EP Strange Love on March 29th.

Simple Creatures said: “An evening of Trash-Pop reverie awaits you at Download Fest. There will be Creatures. They will be Simple. There will be singing and dancing in a big tent. What more could you possibly want?”

Also added are Dinosaur Pile-up who have spent the better part of two decades as purveyors of riff laden ginormous rock and are well versed in whipping the crowd into a frenzy, the powerhouse blend of psychedelic with grunge from Allusinlove, and Liverpool’s Queen Zee who are ready to cause a commotion with their inspiring anthems through their fluid expression of brash queer punk. The Wonder Years will smash a punk shaped whole through Donington with a raucous set of anti-suburban anthems, and they will be in good company with UK pop-punk upstarts Roam, known for their energetic and frantic live shows.

Norway’s Kvelertak are on their way to lead the crowd through a relentless onslaught of exciting ‘black n roll’ and join this year’s line up, as are the aptly named Hot Milk who are one of the hottest upcoming names in UK rock, Finland’s own thrash prodigies Lost Society bringing with them their relentless insanely fast metal for head banging aplenty, the grime meets punk London duo Nova Twins, and dirty blues rockers The Picturebooks. Graveyard will be making their welcome return seamlessly blending rock, soul, 60’s acid fuzz and of course a big dash of heavy metal into an infectious musical stew, alongside Mongolian internet sensations The Hu which is a genre you didn’t know you needed in your life. Goodbye June, Vambo, Cloud and Kim Jennett also set to play.

Tickets for Download Festival are available now from downloadfestival.co.uk/tickets

A loyalty discount is available for a limited time. downloadfestival.co.uk/news-features/register-interest-2018-loyalty