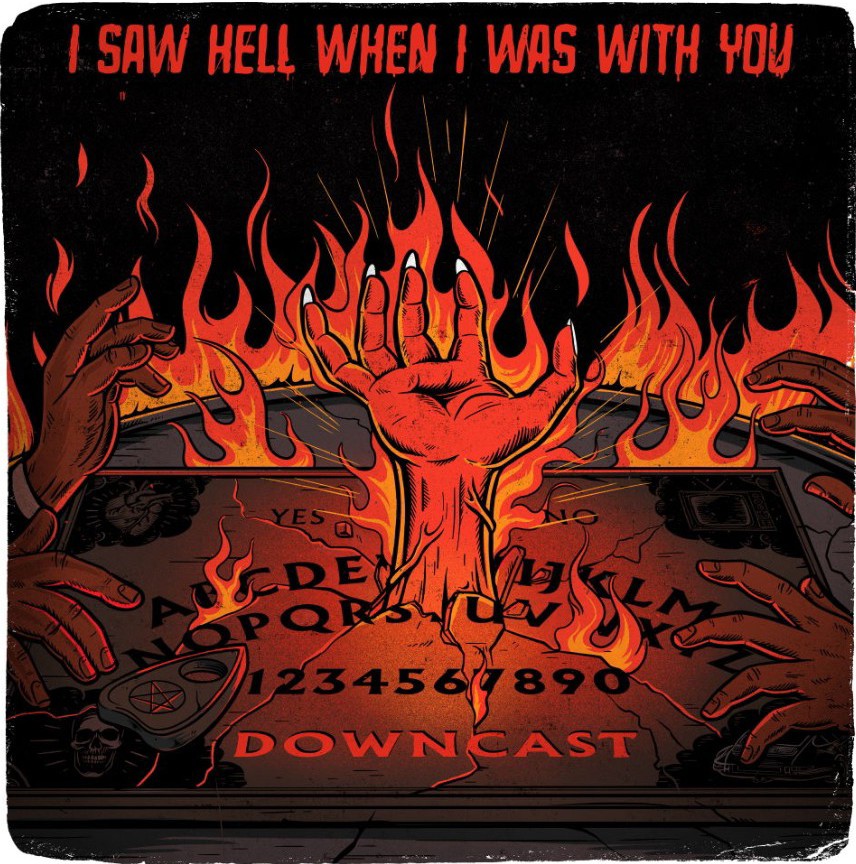 Almost two and a half years in the making, UK emo / alt-rock rising stars downcast are delighted to announce the release of their debut full length album. “i saw hell when i was with you” is set for release on the 4th of March, and is the follow up to their self-titled EP released in early January 2019. The album has been produced by Ian Sadler (Cold Bones, Gender Roles, Delaire The Liar).

Fans have already had a triple dose of what they can expect from i saw hell when i was with you. First, catharsis was unveiled to fans at the beginning of the pandemic. More recently, lead single britannia mills and follow up hell have both won rave reviews and praise from press and fans alike, with the band gaining support from the likes of Kerrang! Radio’s Alex Baker, Rock Sound and Punktastic to name a few.

downcast take you straight to hell!
Another dose of the album will be released on the 31st of January with the release of the brand new, incredibly catchy single “a weight that i can’t stand”.

For more about the upcoming album, let’s hand over to downcast frontman Liam Edwards:

“We began recording this album in August 2019 and completed the process across 3 separate studio sessions with Ian Sadler. This release has been a very long time coming, and we’re excited for everyone to finally hear it. Each song gives a very personal insight into my own experiences, struggles and desires.”

1) britannia mills
2) someplace safer
3) catharsis
4) a weight that i can’t stand
5) hell
6) if u want 2
7) sylvan view
8) mistakes that i have made
9) i want to love again
downcast will be celebrating the release of i saw hell when i was with you with a run of shows across England and Wales shortly after the album comes out. The full run of shows is as follows:

Tickets for the tour are available from Bedlam Bookings. Further information and updates can be found on the band’s social media accounts.

Formed in 2018, downcast carve out melodic bursts of infectious emo/alt-rock, laced with truly heart-wrenching lyrics and a poignant delivery. By 2019, downcast were armed with their engrossing self-titled EP. The record picked up warm praise from Kerrang! Magazine and Punktastic. Since April 2020, downcast have been sporadically releasing singles from their upcoming album ‘i saw hell when i was with you’, which have received the approval of Kerrang! Radio, Rock Sound, Alternative Press and many more.
Downcast are:

|
A weight I can't stand, album, Downcast, I saw hell when I was with you, New Album, news, pop punk, punk, rage pr, uk punk