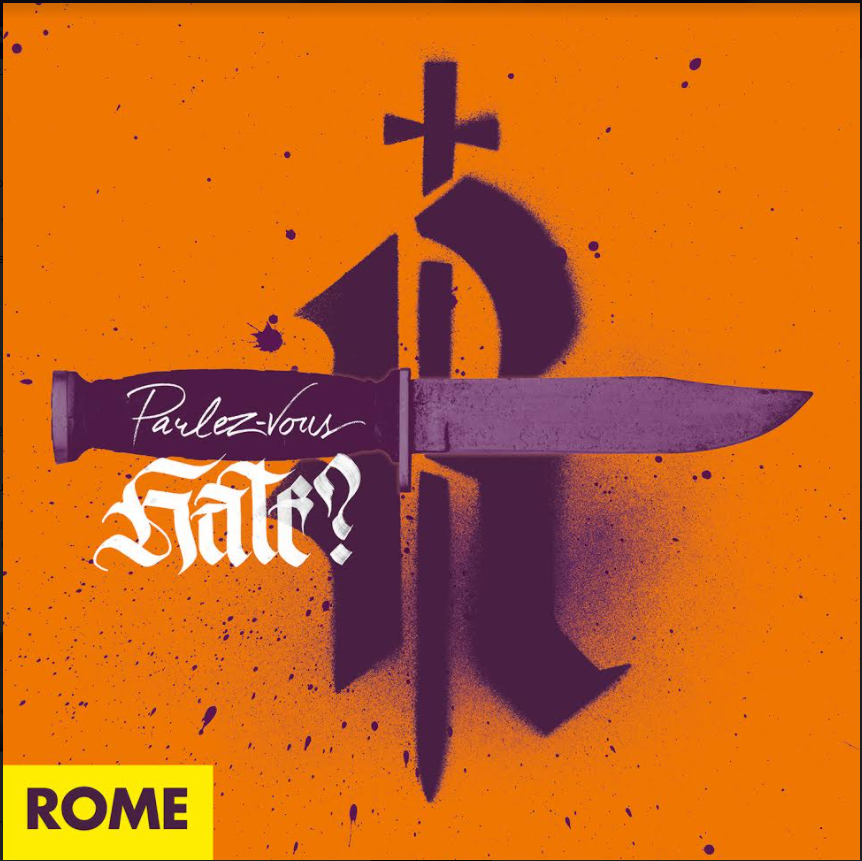 The Latest From Jerome Reuter Is Set For Release On January 29th 2021!

One of Luxembourg’s hardest working outfits, ROME, is back with a surprising new album; “Parlez-Vous Hate?” Bursting with anthems; “Parlez-Vous Hate?” is a tongue-in-cheek, punk rock cry for freedom of expression! After last year’s phenomenal long player, “The Lone Furrow”, no one was expecting Reuter to hit so soon and so hard, but “Parlez-Vous Hate?” delivers on all fronts and is set for release through Trisol Music Group on January 29th 2021.

On why he opted for this direction and the core themes behind the record, Reuter said this: “I must assume the sound of this record is mostly inspired by the anger and frustration of being locked in for about a year and watching your world crumble. It is not the most positive I ever felt, but at least in the studio, with your friends, for a little while there, you are master of your own destiny.”

Considered one of the most important figures in the neofolk genre, Luxembourg’s ROME have spent the last fourteen years exploring and pushing their musical boundaries. The music unites American folklore with Chanson and the angst-ridden tristesse of English Post Punk – ‘Chanson Noir’, as leading man and sole permanent member Reuter, once called it. Looming above all this is his distinctive, deep voice. A voice you wantto believe knows all about man’s true nature and purpose.

Part of a long tradition of lonesome guitar heroes, outcasts moving about restlessly, pursued by their dreams and demons, dedicated to a life beyond the pale. Reuter takes musical nods from Jacques Brel, Johnny Cash, Townes Van Zandt, Tom Waits, Leonard Cohen, Michael Gira, Nick Cave – architects of melancholy like these have left their footprints in his artistic expression.

The protagonists of ROME’s lyrical world are history’s forgotten heroes and outsiders, most notably of the 20th century: Anarchist rebels (as on 2009’s “Flowers From Exile”), the French resistance (on 2010’s “Nos Chants Perdus”), Southern Africa’s struggle for freedom (on 2014’s “A Passage To Rhodesia”) or revolutionaries and underground fighters such as those on ROME’s ambitious 2011 trilogy “Die Aesthetik Der Herrschaftsfreiheit” inspired by the works of Peter Weiss and Pablo Neruda among others.

The 2018 album “Le Ceneri Di Heliodoro” “(“The ashes of Heliodoro”) saw Reuter tackle new terrain and touchy subject matters such as Europe’s dissolving unity, or its relations to the US and the fragile fraternity of its nations. Following on from “Le Ceneri Di Heliodoro”, Reuter pushed on, releasing the aforementioned “The Dublin Sessions” and “Hinter den Mauern der Stadt” in 2019 before returning with 2020’s “The Lone Furrow”.

ROME’s surprise album is a barn-burning, bombs-dropping, ceiling-cracking, ozone-splitting all-out-attack on what one would have expected from ROME after last year’s thought provoking “The Lone Furrow”, and delightfully offhanded in its delivery.