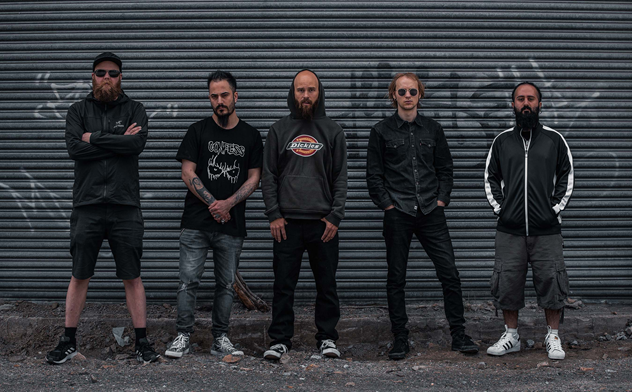 Iranian-Norwegian metallers Confess. Their new single, “Megalodon”, premiered on Decibel Magazine and Kerrang! Radio, and was conceived by frontman Nikan Khosravi as a result of his imprisonment by the Iranian government. The song was written and recorded in Norway, soon after the founding members earned refugee status and was mastered by Grammy-nominated producer Machine.

The album will be released on January 21st 2022 through Swedish label Rexius Records and the track listing is:
1 – Based On A True Story
2 – EVIN
3 – Phoenix Rises
4 – Ransom Note
5 – You Can’t Tame The BEast
6 – Unfilial Son
7 – Megalodon
8 – Under Surveillance
9 – Hegemony
10 – Army Of Pigs!
11 – I Speak Hate
Megalodon quote:
“”Megalodon” was both the first song that I wrote after moving to Norway and using a 7-string guitar. Originally, it was an improvisation that I had recorded on my phone. After a couple of weeks, we were listening to it again and we were like: “Damn! This thing is fire! It should be completed and make it to the album!”.

The whole concept of the song came from this mysterious creature, Megalodon, that rumours have it is still alive deep down in the oceans. That idea resonated with us, because after going to prison, trial after trial and dealing with emigration, so many people thought we were gone. We’re just dead! And I love to prove people wrong…”

Album quote:
“We’re so excited to drop the album! ‘Revenge At All Costs’ is exactly what it says in the title! It took me almost seven years and countless versions of it to finish it, and I couldn’t be happier with the result! We worked with our friend Erling Malm as the producer/mixing engineer and the legendary Machine, who mastered the album and put his magical touch on it at the end! His work with bands like Lamb of God and Suicide Silence had a huge impact on us growing up.

After finishing the album with Rexius Records now I can tell you that the new album will come out in early 2022 after being forced to postpone it so many times over the last couple of years!”

Iranian groove metal/hardcore band Confess describe themselves as a “five-piece street protest”. It’s not a figure of speech: Nikan Khosravi (vocals/guitar) and Arash Ilkhani (DJ / Sampler) have experienced political persecution first-hand. The band’s upcoming album “Revenge at All Costs” is a cry of outrage in the form of chunky down-tuned riffs marinated in the Norwegian winter.

The journey started in junior high school in Tehran when Nikan got a CD from a classmate. It contained music videos by metal bands from the 90s and 2000s. “I was fascinated by the sound of the genre.”, he tells us. “Ever since this music has been the center of my life.”

Nikan and Arash started the band as teenagers in 2010, releasing their first album “Beginning of Dominion” in 2012.  Their early sound gravitated towards old-school death metal and 90s hardcore, always with some grooviness to it.

Nikan started his own label “Opposite Records” in 2014. Up until here, this could sound like the story of any European band. But change the context, and being a metal musician could mean anything from government surveillance to execution.

Arrest and prison followed the release of the band’s second album “In Pursuit of Dreams” in 2015. The experience of confinement in one of Iran’s harshest prisons inspired songs like “Evin” (2019).

Fast forward to 2018, when both Nikan and Arash obtained refugee status in Norway. Confess started experimenting with seven strings and adding modern death metal sounds. But the groovy headbanging spirit of their musical DNA is very much alive.

Confess has played in public without fear of repercussions ever since. After several concerts in Norway, their latest milestone has been opening for Mayhem at Festspillene i Nord.

Confess got signed to Rexius Records in 2021 and is currently preparing for the release of “Megalodon” (single) in September, followed by another single and an album later this year.