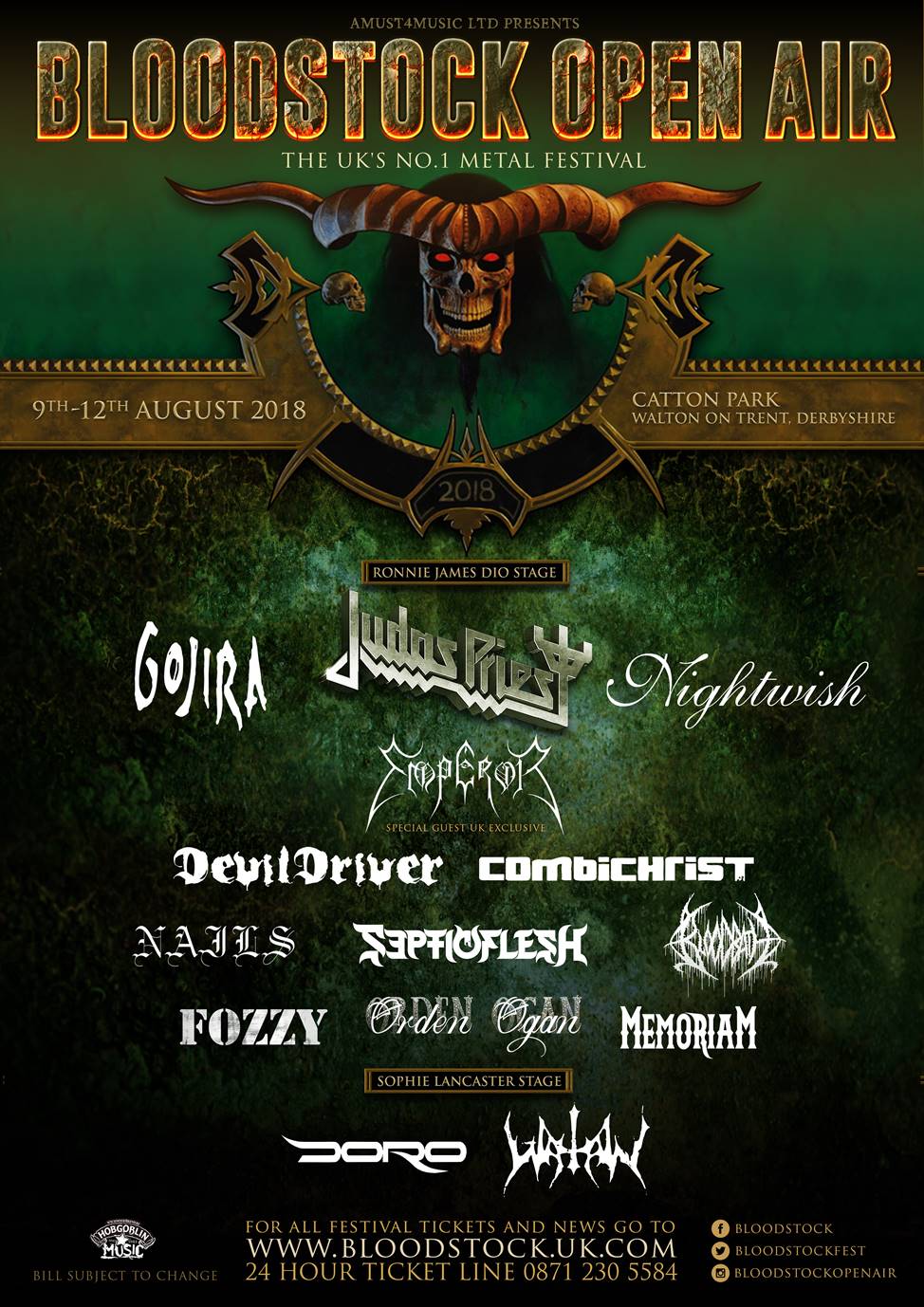 BLOODSTOCK can also share that blackened death metal band DEMONIC RESURRECTION are joining the Sophie Lancaster stage line-up on Sunday, replacing BIO CANCER who have regrettably had to cancel. Jetting in from Mumbai, India, DEMONIC RESURRECTION released their fifth album ‘Dashavatar’ last year. Get familiar with their video for ‘Narasimha – The Man-Lion’, taken from that album, below:

The regional METAL 2 THE MASSES finals have continued to storm across the UK, helping BLOODSTOCK to add the best of up n’ coming, grassroots talent to the New Blood stage for your attention this August! Friday brings melo-death Cardiff winners DEMOCRATUS, Somerset champs KINASIS with their brand of technical extreme metal, and Nottingham’s top dogs UNDERDARK – think Alcest, Oathbreaker, Deafheaven with a touch of Cult of Luna. Also snatching a guest spot are filthy, southern-fried, metal n’ rollers KING BISON.

Sunday’s New Blood bill welcomes Devon/Cornwall conquerors ETHYRFIELD, whose guitarist has even been mentored by the legendary Tony Iommi, doomy sludgers BARBARIAN HERMIT who brought along all the riffs to win in Manchester, and from their excellent CD application, SERVERS, described by Metal Hammer as “Mastodon meets Queen’s brand of intelligent riffs.” Adding some international flavour, are Polish winners, the anonymous mask-wearing PSYCHOTYPE and Norway victors SKYBRUDD, a melting pot of doom/sludge/black/dark metal, as well as black n’ roll troubadours, SRD, via our band swap with Slovenian festival Metaldays!

BLOODSTOCK’s also pleased to reveal a load of brand new entertainment will take place over at the Sophie Lancaster stage after the bands finish. For those of you less keen on sleep, the tent will transition into ‘The Lock In’, a fully immersive club night presented by Old Blue Last Beer and hosted by comedian Andrew O’Neill. Each night will feature a different DJ, celebrating a decade of metal! Thursday sees DJ Krusher unearthing tracks from the ‘70s, Friday rocks out to the ‘80s with dark lord Alexander Milas, on Saturday metal encyclopedia Dom Lawson brings you the best of the ‘90s, and Metal Hammer editor Merlin Alderslade rounds out Sunday’s fun with top tunes from the ‘00s. Not only that, you can expect movies, world record attempts, games, prizes, a giant can sculpture(!) and even more.

If you missed out last month, BLOODSTOCK’s cranking up the fun with some more club nights for July! Don’t miss a great night out at one of the clubs listed below for the chance to win weekend tickets, associated prizes, and hear blistering tracks from BLOODSTOCK bands, old and new.

Want to meet like-minded metalheads who’re going to BLOODSTOCK? Got tips to share, want a camping buddy, or just to chat about bands? Maybe you want to ask if you’re the only one taking a Hawaiian shirt for Cannibal Corpse’s set (Below)?

BLOODSTOCK will take place at Catton Park, Derbyshire on 9th-12th August 2018.  Get additional information at www.bloodstock.uk.com.