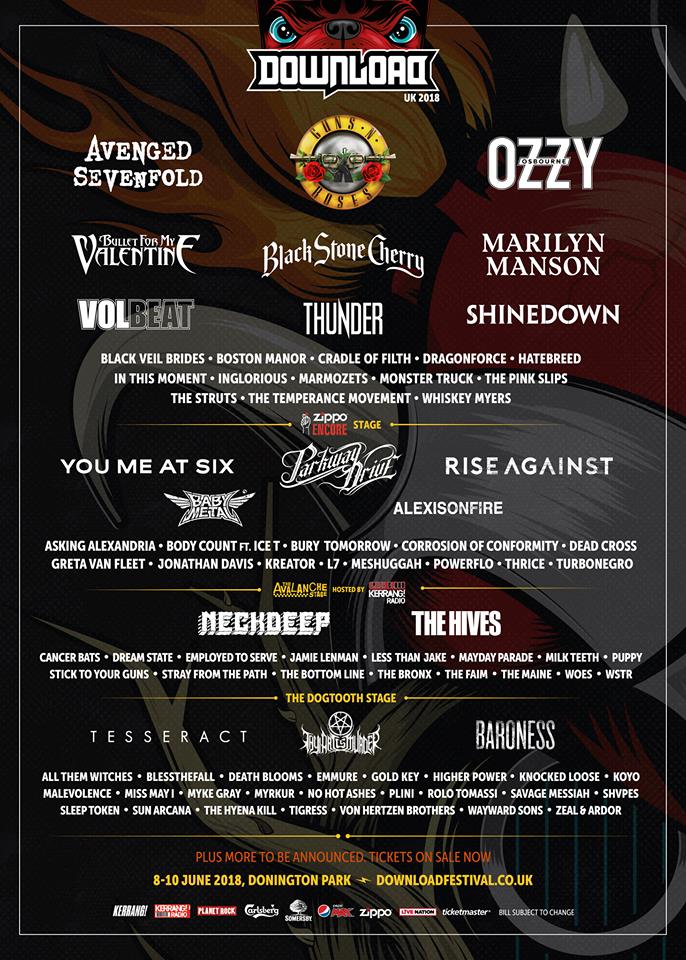 Not content with our already stellar line up of headliners Avenged Sevenfold, Guns N’ Roses and Ozzy Osbourne we’ve just added another 65 names into the mix. From gigantic arena fillers, legendary metal outfits and brand new talent, the spiritual home of rock is about to get a lot LOUDER. \m/

Fresh from a world tour the unstoppable Shinedown, led by rock machine Brent Stephen Smith, are returning to Download to kick ass with roaring riffs and huge anthems. Also coming to Donington are the relentless Volbeat, who’ve carved their own way to massive stages across the globe through their incredible genre melding fun.

You Me At Six have long been at the forefront of breaking British rock and are ready to hit the stage at Download 2018 and step it up a notch. Expect them to be bigger than you’ve ever heard them before.

Legendary Korn frontman Jonathan Davis is making his first Download appearance as a solo artist after recently revealing hotly-anticipated plans to release a solo record this year. Joining him are undisputed masters of symphonic, gothic, black metal Cradle of Filth who promise to be as untamed as ever.

Ready for even more? UK power metal shred lords DragonForce are back in  Download’s hallowed fields for a furiously fast and absurdly entertaining show. Also added are Kentucky boys and stadium conquerors Black Stone Cherry, whose blend of Southern-rock and alternative metal stylings has propelled them to stratospheric success.

With their third album ‘A Deeper Cut’ due for release next month, The Temperance Movement are back for a rousing retro, feel-good time with chunky riffs and swaggering anthems tailor-made for the Download family. British rock legends Thunder have been packing a punch since 1989 and with their new album ‘Rip It Up’, they’re set to be a knock out at Download 2018.

Want more? The Struts’ brand of modernised glam rock and hugely classic hooks is coming to the Main Stage in an all-singing, all-dancing, extravaganza. Taking to the same stage are Texan southern-rockers Whiskey Myers who will whip up the crowd with lashings of country and a healthy dose of rock’n’roll.

On The Dogtooth Stage our previously announced headliners are joined by Australian deathcore mob Thy Art Is Murder, the elite of progressive metal  TesseracT, and one of the UK’s most exciting hardcore bands, Higher Power.

All these names and many more join our previously announced acts. Want to be part of the action?