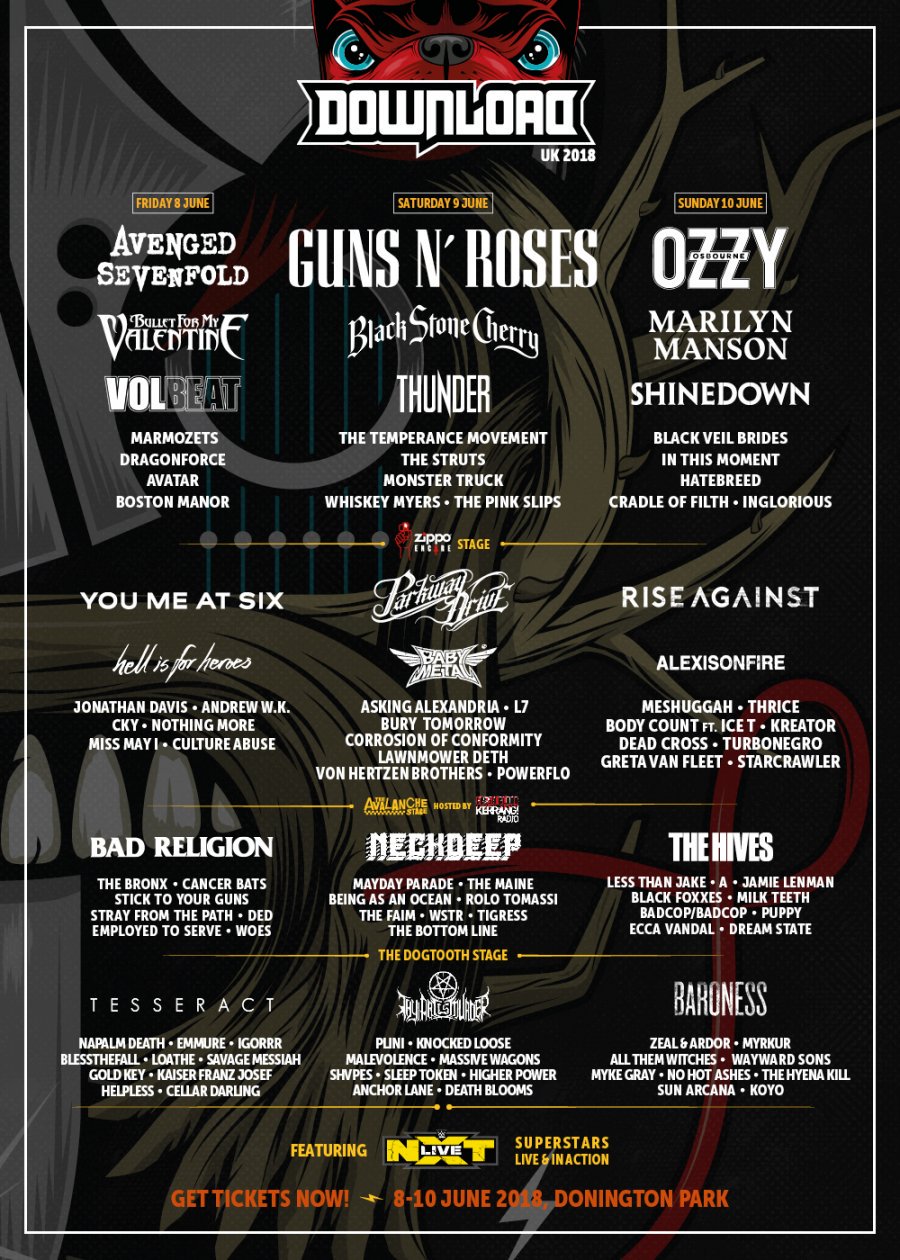 Tickets Are ON SALE NOW!

With less than a month to go, it has been announced that the Headliners that will be taking to the Main Stage for the 2018 Download Festival are none other than Avenged Sevenfold, Guns N’ Roses and Ozzy Osbourne – They will be onstage from Friday 8th June to Sunday 10th June 2018. They will be accompanied by: Bullet For My Valentine, Marilyn Manson, Black Stone Cherry, Volbeat, Shinedown and Thunder. As well as: Marmozets, Dragonforce, The Struts, In This Moment, Avatar, Monster Truck, Hatebreed, Boston Manor, Whiskey Myers, The Pink Slips, Cradle of Filth and Inglorious.

Also The Avalanche Stage (Hosted by Kerrange! Radio) will be showcasiing some of the best punk rock and alternative bands such as: Ded, Bad Religion, Cancer Bats, Employed to Serve, Stick To Your Guns, Stray From the Path, The Bronx, Woes, Being As An Ocean, Mayday Parade, Neck Deep, The Bottom Line, The Faim, The Maine, Tigress, WSTR, Bad Cop/ Bad Cop, Black Foxxes, A, Ecca Vandal, Dream State, Jamie Lenman, Less Than Jake, Milk Teeth, Puppy and The Hives.

Additionally to this years Download Festival, it will once again welcome some of the biggest names of the WWE NXT (Live!) as they hit back in the Festival’s purposely built ring – See HERE for further details. The Dogtooth Stage will also be present offering Downloaders a chance to see some of the brand new talent in Rock and Metal. Bands such as: Napalm Death, Cellar Darling, Helpless, Kaiser FranzJosef, Loathe, Igorrr, BlessTheFall, Emmure, Gold Key, Miss May I, Savage Messiah, Tesseract, Massive Wagons, Anchor Lane, Death Blooms, Higher Power, Knocked Loose, Malevolence, Plini, Rolo Tomassi, Shvpes, Sleep Token, Thy Art is Murder, All Them Witches, Baroness, Koyo, Myke Gray, Myrkur, No Hot Ashes, Sun Arcana, The Hyena Kill, Wayward Sons and Zeal & Ardor.

So, with Music, Mud and Madness on the horizon. What more can one ask for?

If you have not heard already, this years Download Festival will be trialling an on-site supermarket that will be on hand at the convenience to all of us fellow Download Attendees. It will also be trialling a new scheme with the intention to increase plastic recycling, and will be aiming for a Disability-Friendly environment as Sign Interpretors will take to the stages.

The count-down has already begun…