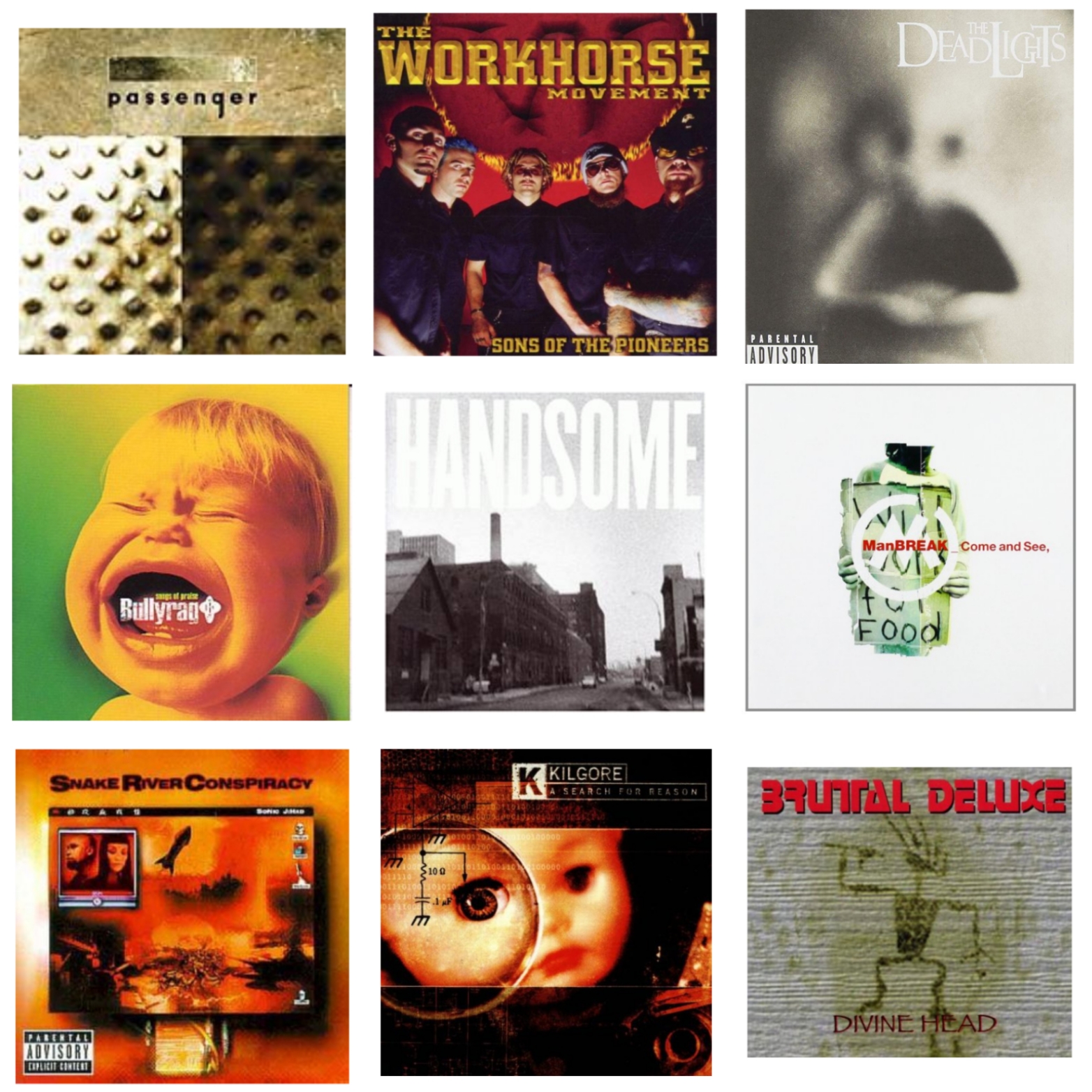 Over the years many bands release many albums.
Some good, some bad, some classic, some terrible, so terrible that we wish we could forget.
Also along the way some albums get lost in the sauce, the 9 on this list sadly, got lost, go and check them out.

The Deadlights – The Deadlights
At the turn of the millennium nu metal was king.
Groove laden New Wave Of American Heavy Metal was starting to kick into life, but baggy jeans, dreadlocks and facial piercings were still the don mega.
In amongst this were several bands that took the nu template and added a twist or another genre into the mix.
Step forward The Deadlights, who managed to mix punk attitude and energy (on Whores) as well as epic melodic songwriting (on Foolish Pride) in with the tried and tested quiet/loud dynamics nu metal was famous for.
They only released the one self titled album, and it’s a magical ride that was lost in the maze of nu metal, and it’s a shame as it displays a lot more chops than some of the more successful bands within the style, Duke’s distinctive vocals separate them from the pack as his high cleans contrast with his savage harsh vocals with reckless abandon.

The Workhorse Movement – sons of the pioneers
Another band that got lost in the nu metal mix, but I’m not really sure how, as these chaps owe a lot more to stoner flavoured groves than hip hop inspired beats, despite the presence of the acid rap God Esham on Detroit.
Sadly I think the curse of being signed to Roadrunner Records for a few years carried a certain expectation,an expectation this band showed no sign of adhering to, and it’s a shame as this album is amazing, drifting through alternative, groove, stoner, psychedelica, rock, funk and anything else they can squeeze in.
The songs manage to raise a smile as easily as they make you tap your toe or nod your head, the dual vocals add layers of melody and offer juxtaposition with a little aggression against a melodic foil.
Such a lost gem, find this.

Kilgore – A Search For Reason
This album should have made this band superstars.
It’s that simple.
Everything it tackles, every style and variation is perfectly executed.
The album kicks off with the facemelting Steam Roller, barely scraping 2 minutes, flying by loaded with aggression, yet somehow still catchy.
By the time Lullaby For Your Casket has appeared, the tone of the album has changed and morphed through rock, grunge and a little prog as vocalist Jay holds his pristine barritone superbly against the dense guitars behind him, but it’s during the closing of this song that he delivers a calm, composed and emotionally powerful falsetto finish that really surprised on first listen.
Burton of Fear Factory shows up to add some serious oomph to TK-421 late in the album and it’s a testament to Jay that he outshines Burton on the song.
As elements of industrial start to eek their way into the mix
This album touches many genres and delivers them all brilliantly.

Bullyrag – Songs of Praise
After Dub War and before Skindred there was Bullyrag.
A band that also melded dub and reggae into their metal.
The sum of their efforts resulted in a spot on Channel five for their first single Frantic and lots of praise from Kerrang! magazine.
Lots of tours, lots of shows, lots of love from the press, yet somehow the record buying public seemed slow to respond, hell if I know why as Songs of Praise is an immense album.
Thick as tar guitars fighting with some of the grooviest basslines committed to tape hitting reggae influenced drums providing such a distinctive sound.
And that’s all before we even mention Robbie Awok’s voice.
Dripping with attitude and swagger that’s drenched in smoke, telling stories of growing up, getting baked and finding himself in trouble.
An album that’s aged exceptionally well, it sounds as unique now as it did then and is well worth an explore.

Passenger – passenger
Before In Flames embraced the extra melodies, slowed down and got accused of being a Nu Metal band, Anders Frieden was part of this project called Passenger with a former Guardenian and Engel guitarist.
At the time it was seen just as a project, not so much of a sign of things to come.
But looking back this album points huge fingers at where In Flames would wander.
Still though, in comparison this is a much groovier and experimental exercise for Frieden, mixing harsh and clean vocals through additional layers, echoes and distortion his voice because a much more versatile weapon on this album, that combined with the huge downtuned guitars swirling around it and we have a recipe for success.
Oft written off by the In Flames faithful as it was deemed a deviation too far from the core sound of the band, but if you fancy big riffs, big melodies, lots of emotion and decent bang of the head, the only Passenger album is worth spending some time with.

ManBREAK – Come And See
A band that attempts to mix rock, indie, hip hop and pop melodies.
On paper it sounds awful, in reality, it was exceptional.
Politically charged lyrics about life on the bread line, struggling to get from week to week “do you wanna be bored, do you wanna be broke, do you have to beg for the price of a smoke” this was storytelling to music with a very British twist.
Throughout the 80s and 90s Americans, especially hip hop bands, had been telling us the grim reality of their life, a lot of their British counterparts had been more concerned with having a good time and excessive living within their stories and less about those that struggled, that reality is laid bare on this brilliant album.
Riff borrowed from the 60s, 70s and 80s running rampant over very danceable beats bring this album to vibrant life.
Take a listen and remember it wasn’t all good all the time in the 90s, despite what some of us who lived it choose to tell you through our rose tinted glasses.

Handsome – handsome
Featuring ex members of Quicksand, Helmet and Gorilla Biscuits, the expectations for this post hardcore collective were high, and boy do they deliver, sadly just the one self titled album, but that said this album has more riffs than done bands fit into their entire careers.
Deftly switching from heavy grooves to atmospheric distortion with one of the most unique vocals I have ever heard.
Walking the musical line of post hardcore with a slightly fatter guitar sound than most associated with the genre and the crispest snare drums this side of Snapcase.
Lyrics discussing emotions and dreams that rapidly become nightmares this album is a comfort blanket for anyone emotionally fragile as it takes a moment to let you rage and then say it’s ok, you’re not alone.
It’s a staggering album that snuck up, amazed and then disappeared far too quickly.

Snake River Conspiracy – Sonic Jihad
How does the idea of Shirley Manson fronting Nine Inch Nails sound to you?
Yup, it’s that good.
Industrial, pop, metal, trip hop all mixing it up, the collision of songs really shouldn’t work, but the super tight, brighter than a thousand suns production hold it all together.
You then throw Tobey Torres’ suggest, seductive and at times very aggressive vocals on top and you have a sonic maelstrom unlike anything else.
Telling stories of love, hate, frustrations, covering The Cure, The Smith’s and invoking the ghost of James Bond over the course of the album, quite how this magical mixture works is nothing short of a miracle, but it’s faultless.

Brutal Deluxe – Divine Head
A noisy three piece that came covered head to toe in tribal paint and costumes, looking not a million miles away from how Alien Weaponry look some 20 odd years later, except they were from London!
Drawing sonic comparisons most commonly to Slipknot and White Zombie in the press, they always reminded me of Tool a little myself, these gents managed to snap necks and shake rumps as the music shifted between huge grooves and frantic bursts of aggression.
Divide Head was the band’s debut album, they seemed to take forever to follow it up, which for me I think lead to the downfall of the band as they missed their moment.
That doesn’t take away any of the primal power that runs through this phenomenal album though, tight, refined and designed to make the listener move, it shuffles through some brilliant builds of tension before delivering a bombast that’ll take your head off.
Find this album and grab it when you can!