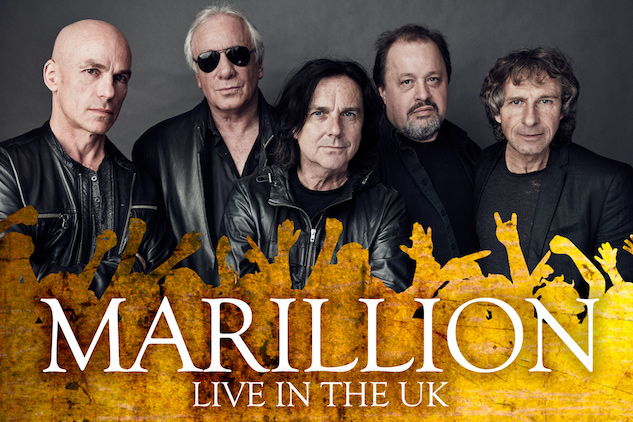 Prog rock giants MARILLION announce 7 new UK dates in April 2018 on the back of their October show at The Royal Albert Hall, which sold out within four minutes of going on sale, and The London Palladium in November, which also sold out in record time.
MARILLION’S music is more than prog, it’s musically-experimental and yet-emotional. Within the genre it has a uniquely soul-baring aspect which sets the band apart and has elicited an almost religiously zealous following.  After nearly 40 years, the band has evolved into a vibrant and international musical force, flourishing seemingly outside of fashion and mainstream media exposure. Since their formation, they have had 19 Top 30 singles, four of which made the Top 10.
Their most recent album, F E A R (Fuck Everyone and Run), peaked at No. 4 in the UK album charts and No. 1 in the rock chart last year and was given a 5-star review by The Guardian.
Steve Hogarth says: “I have been part of this band now for 27 years and it barely feels like 10. I think we’re as inspired as we ever were, and we’re still enjoying creating together. Luckily our music has remained free to evolve and change without the constraints of a corporate music business which otherwise might have killed us.
By reinventing the business-model we have maintained a one-to-one relationship with our fans, and that feeling is never more apparent than at the live shows. It’s always a pleasure to share a room with “the family” and exchange the passion on stage with the passion off stage.
We’re playing a few places we haven’t visited for a while. Long overdue. ‘Really looking forward to this little outing.”
MARILLION are not just musically innovative… they are widely acknowledged to be the first band to use the-now-commonplace crowdfunding scheme. Pledge Music and Oxford University have acknowledged that the band invented the business model. In the late 90s, fans sponsored an entire US tour.  Their first crowd-funded album was Anoraknophobia, released in 2001.
Winners of a staggering EIGHT Categories in 2016 Prog Mag Awards (see Notes to Editors), MARILLION elicit remarkable devotion from their international fan base.  To those who already love MARILLION, the band is something special. To the uninitiated, it’s a love affair waiting to happen.
2018 Tour Dates as follows:-
Wed 11th April – Gateshead – The Sage
Fri 13th April – Cambridge – Corn Exchange
Sat 14th April – Birmingham – Symphony Hall
Mon 16th April – Brighton – Dome
Tue 17th April – Bristol Colston – Hall
Thu 19th April – Reading – Hexagon
Fri 20th April – Liverpool – Philharmonic Hall
Tickets go on sale FRIDAY, 15th SEPTEMBER at 10.00am – from myticket.co.uk, seetickets.com & venue box offices.
|
Legend, marillion, prog rock, Rock, Tour, UK