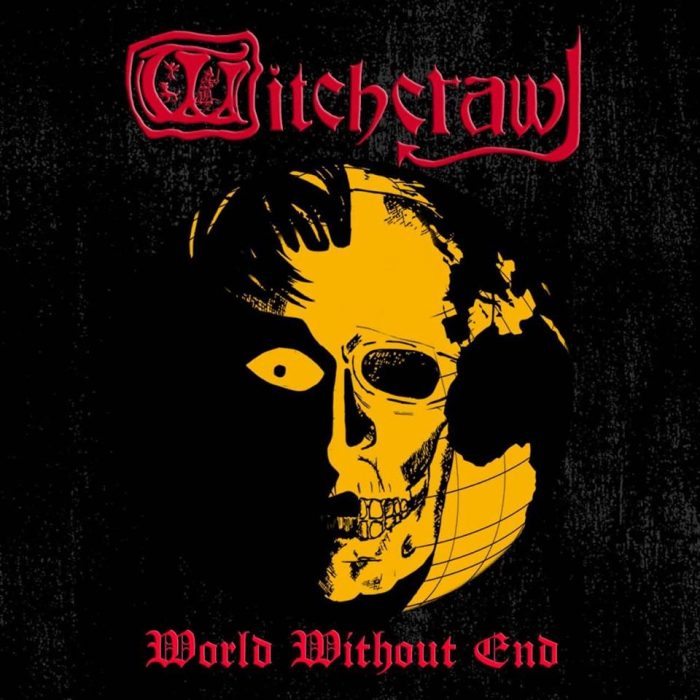 Formed in 2018 and hailing from Athens in Greece, Witchcrawl are the embodiment of a band striving to capture the nostalgia and charm of traditional heavy metal. Recorded in 2019 and released on Katoptron IX Records, World Without End is the bands debut EP which solidifies this mission, combining clear influences of Iron Maiden and Mercyful Fate with undeniable tight musicianship, heavy riffs and melodies.

The ominous intro track Aradia Violette is a spoken piece that reinforces the bands primary subject matter – witches and the fiery condemnation they faced. The 1980s metal scene was riddled with such topics with Warlock’s 1984 album Burning the Witches being one such example. The nostalgia for this time period is clearly thriving with Witchcrawl’s aesthetic and its interesting at this point to see whether this develops into their own recognisable sound or just another duplicate of the 1980s metal formula.

The speaker of the piece, a British man with a voice dripping in received pronunciation, announces to an audience in 1550 that on behalf of the King of Scotland a woman is sentenced to burn alive for witchcraft and “communion with the devil.” There are slight historical inaccuracies here as despite being so young, Mary Queen of Scots was actually on the throne during this time period. The piece fades with bombastic music and crackling that wouldn’t be amiss in a quintessentially overly dramatic 1950s film, layered with screeches from the accused witch as she burns alive. Naff? Yes. Harking back to the time of sinister voice overs such as Number of the Beast? Absolutely. Despite awkward factual inaccuracies, the piece does slot in well with the rest of the album, both in subject matter and the grittiness of the production that reinforces nostalgia for the underground 80s metal scene.

Withcrawl’s first publicly released track Eye for an Eye kicks off with tremolo picking that then shifts into a distinct extra layer of heaviness once frontman Tasos Molyviatis reveals his gruff vocals. This gruffness, a wonderfully heavy element which is surprisingly melodic, switches between lowering to a growl or ascending into a screech. The latter sounds pretty damn good until it begins to sound like King Diamond desperately needing a box of lozenges.

Musically there’s a particularly fantastic segment in the middle which conveys images of heroic battles through its power chords and guitar melodies that are pushed forth with a subtle flurry of double bass. As a whole it’s a genuinely enjoyable track with consistent and catchy riffs that would appease old school metal fans.

Title track World Without End opens with a palm muted chugging riff that’s layered with an ominous lead melody and a refreshingly audible bass line. This builds up effectively into a fantastic isolated metal riff that propels each band member into the verses. Each instrument blends perfectly together with the vocals as Molyviatis occasionally sounds like an angry metal pirate. His performance unfortunately falters during the choruses as he repetitively shifts between warbling high vocals to low growls. It’s a bit rough around the edges but its bearable after the first initial cringe.

There’s another ritualistic retro voice clip of women airily speaking of the Queen of the Night and other such ramblings but it actually works so well once one of the guitars shifts into a short melodic solo. It’s also good to know that the intro tape of Aradia Violette is not a random addition as a connection to the condemned witch appears throughout the album. With one final disjointed throaty scream (meant in the best possible way) from Molyviatis, the six-minute track concludes and asserts itself as a quintessential metal track that has some truly stellar moments.

Cydonia Rose is definitely the standout track in terms of instrumental sections and vocal range, showcasing the bands clear musicianship and skill. The song opens with a galloping riff layered with harmonies which then shifts into a slower and more melodious touch. Molyviatis’ wandering vocals in the verses are surprisingly beautiful, evoking a haunting dimension to their previously heavier material. After an ambient instrumental the song rapidly shifts into a fantastic guitar solo, blending melody with impressively fast and intricate playing that’s propelled by the return of the galloping riff. It’s a track that pushes Witchcrawl beyond their primary influences and demonstrates their song writing ability, something which is more impressive when considering the limited years together as a band.

Yet nostalgic influences are still clearly prevalent as final track, The Doom of Hades reeks of Candlemass and the archetypal slow and thick trudge of doom. Sinister riffs and mournful growling vocals create a song that evokes a sense of dread as ritualistic elements continues the theme of witchcraft.

World Without End is an enjoyable debut effort, especially considering the differing tones and styles of metal that Witchcrawl mange to explore within four songs. Despite their differences and similarities, each track is united through a nostalgia and revival of traditional heavy metal, whether its through the rustic production or topics of witchcraft and evil forces. It’s not an album full of revelations or total uniqueness as there’s a plethora of other bands creating the same type of sound and aesthetic. Yet Witchcrawl are undoubtedly good at what they do despite the clichés.

After a promising start, it’ll be interesting to see how their sound develops onto a full-length album in the future.

Highlights: Eye for an Eye, World Without End, Cydonia Rose

Witchcrawl are a part of Katoptron IX Records