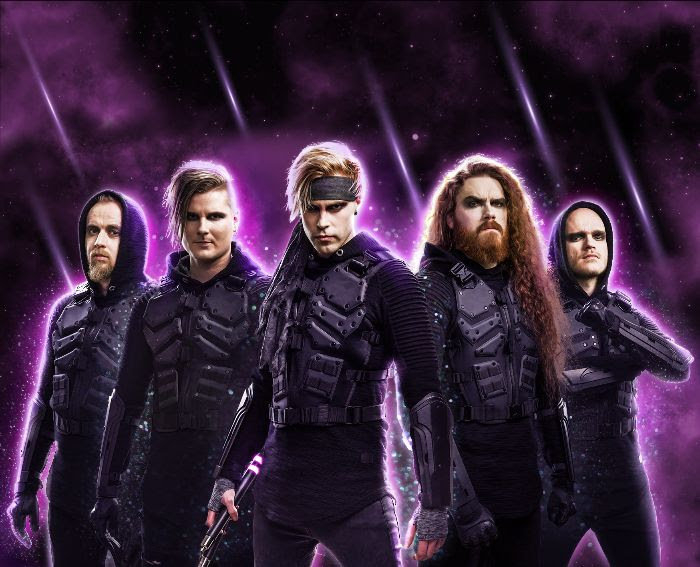 Join forces with VICTORIUS and storm the cosmic universe with their brand new single and lyric video, “Nippon Knights”, taken from the upcoming album, Space Ninjas From Hell, out January 17th via Napalm Records!

Being home to advanced technologies and some of the most iconic pop culture figures, it is no wonder that Japan was precisely chosen by power metal warriors VICTORIUS to tell their gripping audio-visual story of battles and intergalactic bravery. First of all, however, the lyric video to “Nippon Knights” is a personal gesture of appreciation towards Japanese fans supporting the band in their musical conquest, both during the shows and behind the scenes. Featuring snapshots from VICTORIUS gigs in Tokyo, as well as the footage of their very personal exploration of the captivating cityscape, “Nippon Knights” and its accompanying video tell the story of the rise of an ultramodern empire, establishing the track as an actual prelude to one of the most spectacular space battles of 2020, guiding the listeners through the labyrinths of futuristic power metal.

The imposing visuals and almost discernable energy of the live performance aside, “Nippon Knights” is another successful combat in VICTORIUS’ war for space domination of the power metal galaxy. VICTORIUS calls for the true ninja souls, for each and every katana determined to change the fate of the galaxies.

Raise Your Laser Katana To The Burning Sky And Watch “Nippon Knights”:

The era of the Space Ninjas is not over yet! After an evil ninja clan joined forces with the dragon god to enslave the world, only a wizard could have stopped them before it was too late…
Thinking their lethal opponent had been defeated one and for all, mankind lived in peace for years… These mythical warriors, however, have not given up on their ruthless plans of conquering the world. Hidden in their secret headquarters on the dark side of the sun – the Cosmic Space Commando Base – the ninjas only waited to fully regain their power! Fueled by hatred, stronger and faster than ever before, armed with their uniquely improved weapons and ninja-skills, they joined forces with the dragon god again – and this time the world needs to pay!

After their successful European tour performing alongside heavy metal bangers MAJESTYand WARKINGS, VICTORIUS is more than ready to attack the world again! Be quick (like a ninja!) and catch these power metal warriors performing at four exclusive release shows throughout Germany.