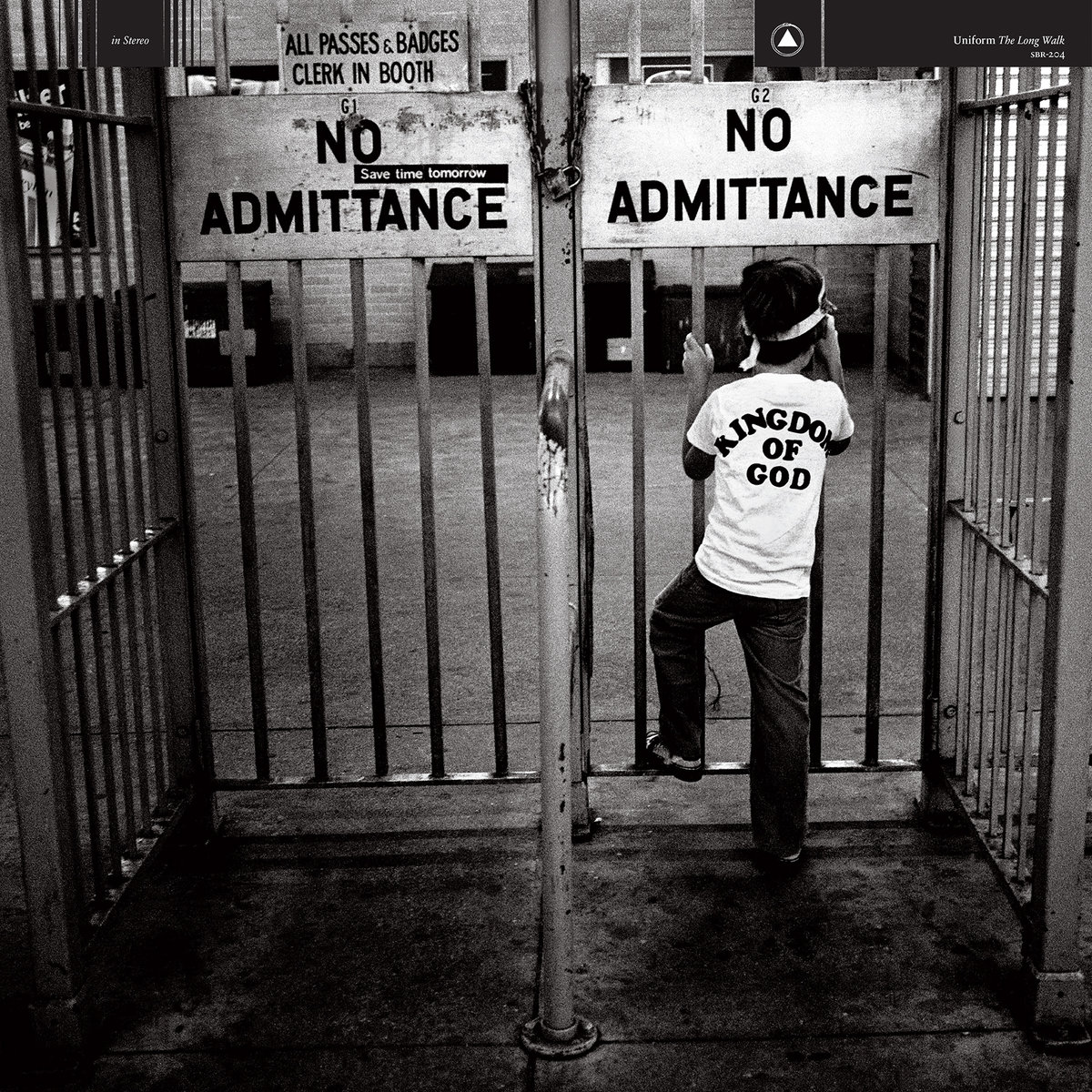 The up and coming industrial noise punks from New York known as Uniform, present us with their latest album, The Long Walk. This album is the trio’s third major release off the back of their 2016 EP titled Ghosthouse, and their 2017 album Wake In Fright, and it’s the first I’ve ever heard of the band. Heading into the album, I actually took it up for a review by mistake, due to the fact I had requested the wrong album being sent to me from MMH. I was actually expecting a doom metal album, but after getting some names mixed up I ended up with The Long Walk. It took me until half way through the intro song The Walk, to realise that I wasn’t listening to a doom metal album. Instead I was listening to a mixture of face-melting noisy industrial cyber punk, and I couldn’t have been much happier with the “mistake” I had made. Not only was I happy about the fact that this album sounded like it was going to be pretty good, but the fact I’d never heard of these guys before made it even better, it meant I could go into the album completely blind not having a clue what to expect.

As I said, the album begins with The Walk, and what better way to be introduced to these guys. The song begins brilliantly with a sublimely evil synth line, before erupting with this shattering drum beat and low guitar and basslines, leaving just enough room for vocalist Michael Berdan to let loose with his tortured and truly New York yelled vocals. The song just crashes onward with no breather at all, and it becomes harder and harder to not make the obvious connection between Uniform’s sound and the sound of New York noise punk legends Unsane. Especially on the next couple of tracks, as there are far more guitar driven moments, like the completely savage riff to the track Found which is thicker than any other riff you’ve heard this year, as well as feeling the power of the rhythm section drive things along and switch up the tempo, like on the track Inhuman Condition.

Around the half way mark of The Long Walk, the ghostly synth intro of the opening track The Walk might feel a million miles away. The whole albums clocks in at 37 minutes, and I’d say about 32 minutes of this thing is just an unrelenting assault on your eardrums. The Long Walk’s heart is primarily filled with a complete onslaught of noisy guitar and basslines, sparkling cymbals and howling vocals. Uniform seem to be a band that have a great balance between searching for the perfect tones, and keeping things raw enough to not get too lost in it all. The mix is cohesive and pleasing to the ear, and whilst the album is structured like a fairly conventional 8 track album, featuring many different riffs and tempos, the main bulk of the album can blur by as if it’s a well put together sludge or drone metal album/song on a casual listen, which isn’t a bad thing at all.

Although it’s relentless nature is certainly The Long Walks’ driving point, it does mean that there are cracks left elsewhere. The fact that there is barely any breathing space is great, but when I think to some of my favourite moments on the album, they are often the areas where Uniform experimented or changed things up a little. If I was going to have one criticism, it would be that it could have done with more of these moments, but I will say that thanks to the chaotic nature of the album, it means these moments stand out even more. The latter half of the track Transubstantiation is one of these stand outs, where we are given some breathing room thanks to a fantastic and suspenseful bridge section. The intro to The Walk deserves mentioning again, because another moment like that incredible intro synth somewhere else on the album would have only served to strengthen the record in my opinion. And the outro track Peaceable Kingdom is a decent ender too, it’s probably the track with the most dynamic range and the most unique atmosphere in my opinion, with a suitable tempo and atmosphere for an album ender.

In all, I’ve got slim pickings here when it comes to criticising The Long Walk. I made one of the best “mistakes” I’ve made in a while by accidentally stumbling across this album. The sound is incredibly fresh, it’s unusual, it’s evil, and it’s one of the most authentically heavy records I’ve heard in a long time, and it does so without following a typical heavy formula. Hopefully these guys will only continue to release music of this calibre, and thanks to this being only their second full length, I can only imagine the future looks very good for these guys. The Long Walk is an easy recommendation and Uniform are a band I will definitely be looking out for from now on.

The Long Walk is out on August 17th, and is available here!