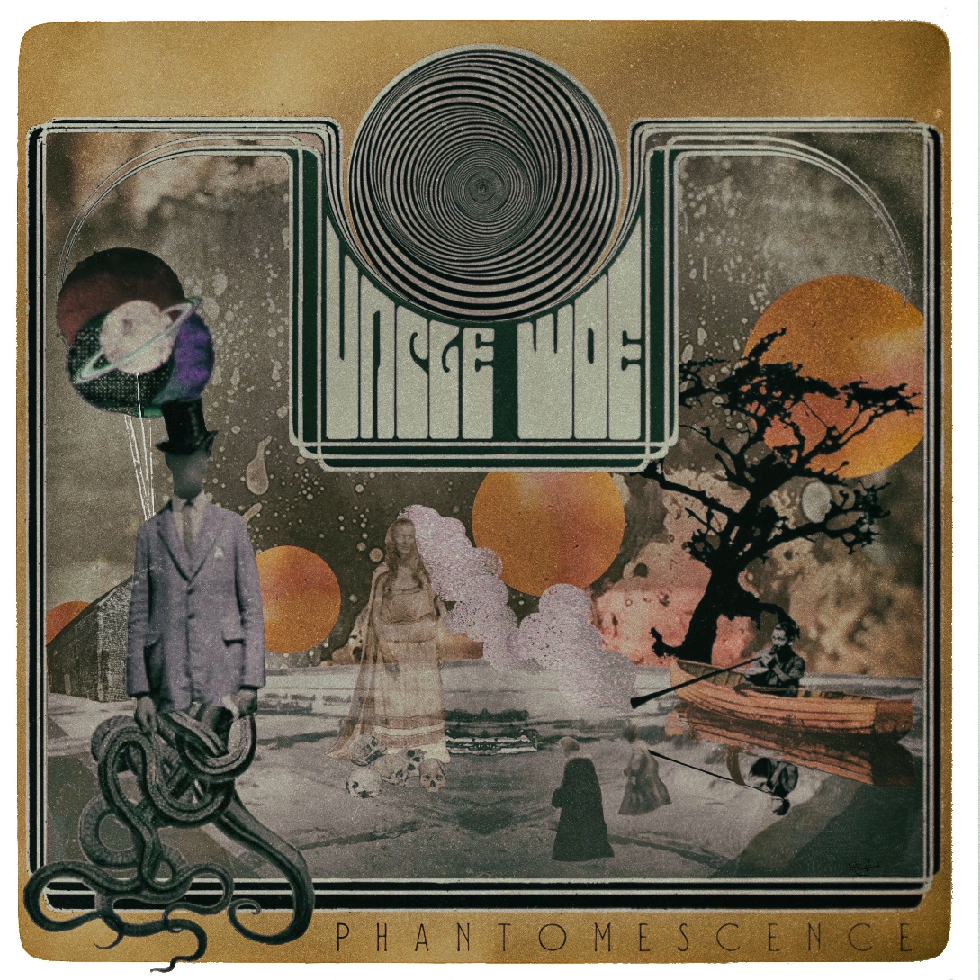 From rural Ontario, Canada, come Uncle Woe with their sophomore album. They play progressive, sludgy, psychy doom with a hint of post-metal akin to bands such as Yob, and ‘Phantomescence’ comes somewhat as the result of the ongoing Covid-19 pandemic. Without the opportunity to get together and rehearse, bandmembers Nicholas Wowk (drums) and Rain Fice (guitar, bass, vocals and everything else) decided to record an album. You have to keep that ball rolling in the face of adversity… Not that Uncle Woe are strangers to that, with the lack of a live metal scene where they’re based in the Canadian hills. Be under no illusion – these are two very committed musicians. How does the album sound, then?

‘Become The Ghost’ opens proceedings – interestingly, the only song on the album that wasn’t completely written on the fly. It opens with an odd-time riff, heavily detuned, that lulls you into a trance. The vocals have a sludgy torturedness to them, but are soulful and melodic – making a nice contrast to what you might expect upon hearing the music. There’s more guttural moments spread out the album nicely to add texture, although it never feels overdone. The guitar work has some good moments, including a brilliant, fiddly riff midway through second song ‘On Laden Shores’ and some soloing very reminiscent of early 1980s Tony Iommi on ‘A Map of Dead Stars’.

The production is very warm and retro, not least due to the vintage amps that Fice leans towards, which has undoubtedly played a large part in his style as a producer; having mixed and mastered the whole album on top of everything else, he’s stayed busy! ‘Phantomescence’, in this sense, sounds like something straight out of the late 60s or early 70s, although in a much more contemporary genre. The music is a lot more bleak and desolate than the music from those days of classic rock – likely reflective of the band’s rural environment, or the uncertain and worrying times that it was recorded in, and that we currently live in.

Uncle Woe describe themselves as doing ‘heavy things that go on for a bit’. It’s pretty heavy, for sure, and the songs go on, for sure, and on, and on… With two thirteen minute-long tracks on the album, lengthy jams are certainly a big part of their sonic landscape. This is a large pitfall of this release. The songs are sprawling, meandering epics, but can be hard to follow in terms of structure and too often lack any memorable hooks or aspects to them. In addition, as much of a brooding atmosphere that the vocals create, by themselves they lack the power to drive the album as a lead instrument at the front of the mix.

‘Phantomescence’ isn’t a bad album at all, but neither is it particularly strong. Despite the critical comments in the last paragraph I do believe this band has a lot of potential, as demonstrated by their ambitious songwriting, ear for tone and impressive work ethic. Perhaps a few more hook-based, memorable moments? Perhaps a more contemporary approach to production for the genre? Perhaps they should carry on making exactly the music that they want to make and I’m not saying much of relevance. I’m sure to follow this band and keep up to date with what they get up to. This is an album for big listeners of progressive, doom, sludge, post-metal, although Uncle Woe are unlikely to turn any other heads. Yet. ‘Phantomescence’ is a spacey, epic, bleak – and quite long – doomy journey.

‘Phantomescence’ is out on October 23rd on Packard Black Productions