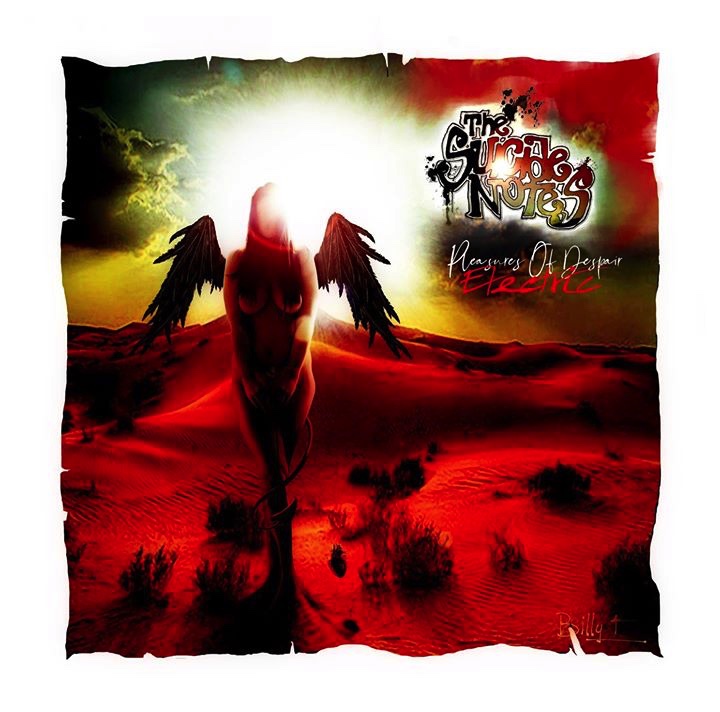 A single bell tolls and thunder rumbles, causing a dog to howl in the wind, something is stirring in the cold night air and approaching fast. Ok, no need to panic it’s just the eerie introduction to ‘Black Dog Howlin’.  Which signals the beginning of the long awaited, electric ‘Pleasures Of Despair’ EP, from the Suicide Notes. After seeing these guys at the Dementia Aware Festival in Wolverhampton’s infamous Giffard Arms last year, I have been a massive fan. They take me back to those days in the late 80s early 90s when we had that sleazy scene in the UK, full of bands with names that had to include Angels, Dogs, Boys or Hearts. The decadent, bandits and pirates with guitars slung low, piles of eyeliner, cowboy boots and colourful scarves, uttering trashy rock and roll. Our heroes, that we caught up with every week in Kerrang magazine. The Suicide Notes are descendants of those long lost bands and have reignited the flames and essence, of those that a lot of us miss so dearly.

So after the aforementioned sinister intro, the first song ‘Black Dog Howlin’ rolls on, it’s a number full of Billy T’s scratchy vocals, telling us how it is, with the guitar of Alex Holmes adding some soulful steaming. It’s deliberately messy and fluid, as is the ‘Notes’ style of play, Gavin Hobbs’ drums can be heard throughout, the production being so clear. ‘Smoke It like A Cigarette’ is a favourite of the fans, it appears in acoustic form on the EP that came out Mid March. (That piece of art, also titled Pleasures Of Despair, features 2 different tracks, so is one to add to your collection) Anyway the song is a swaying ballsy ballad, think of The Dogs D’Amour and those sing along chorus’s of Billy Two Rivers and The Satellite Kid, it’s in the same self injected vein.

Up next is ‘On The Rocks’ with a typical rock and roll rhythm, Damien Beale plays in such a way that you would be forgiven for thinking it was a slap bass, it certainly gives off that kind of deep, warm and simple line. Again some wonderful guitar magic from Holmes with Billy T adding his sandpaper warbling and the result is blissfully perfect. ’Ragdoll’ is the final one of the four tracks and again is a voyage of unadulterated and shameless charm. Over 6 minutes with a colourful chorus and easy to go, bar room rock. Lots of backing vocals and plenty of intricate lead guitar, a fine way indeed to end the show and disappear over the horizon.

Well, the wait has been worth it, The Suicide Notes have delivered a beautiful and inspiring EP, with effortless creativity and plenty of that gritty, sleazy rock ‘n’ roll, that few can muster today. Go to the links below for your copy of ‘Pleasures Of Despair’ both Electric and Acoustic versions are incredible and when the present situation is all over, go and see them live, they are unique onstage and thoroughly entertaining.

‘A voyage of unadulterated and shameless charm’.

Billy T is also an artist of immense talent, you can see examples of his work at –  Deathrattle Designs