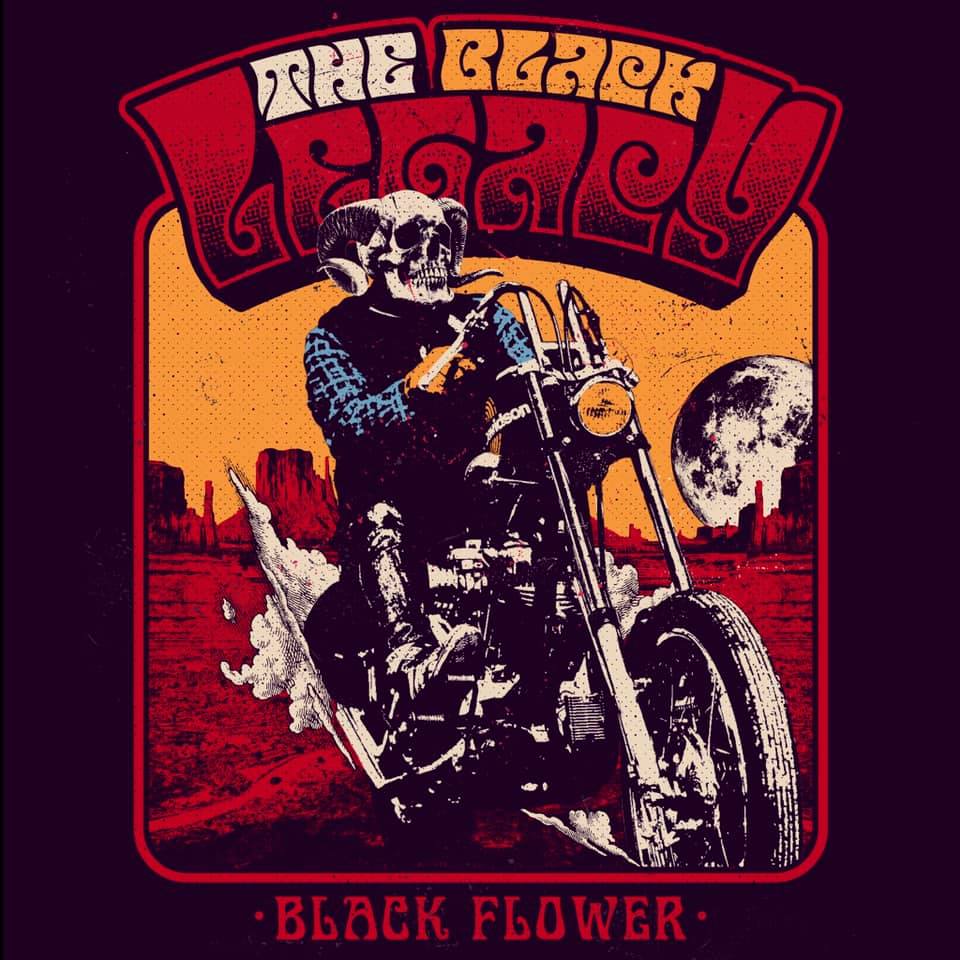 The sound of your local biker gang getting together and forming a band, conjures up many thoughts and images. But when you live in Milan and the local bikers consist of The Black Legacy guys, the pictures are not quite the same! Back in 2018 four members from the Italian city’s Rock and Motorcycle scene decided to make some music and starting in the summer of 2019, the debut album began to take shape. Finally the release date is upon us, so what’s the verdict ?

The new single and title track is also the first on the playlist ‘Black Flower’. A chunk of messy riffs and heavy, intoxicating vibes start to ooze out of my headphones. Black Legacy are fans of Black Sabbath, QOTSA and Black Label Society, so the resulting mixture, like that on ‘Endless Roads’ is one of slow, deliberate and punishing guitar from Alberto T, with sinking vocals by Die that hold like superglue. ‘Fire and Stone’ also has that low strung guitar sound, love the way it just revolves around, easy to appreciate but clever and catchy.The next song ‘The Race’ is a more down to earth and basic rocker, M Pepper’s bass and again the low guitar dominant over the vocals. Loads of early Sabbath, inspired riffing on ‘My Last Day’ and Die’s voice is brought to the front, with wails and higher levels.

‘A bad hungover is what I get, from a rock and roll night, in a dirty, dark place’ – BLACK FLOWER

There are more Stoner Rock and Grunge influences on ‘Dying Every Night’ and ‘Queen Of The Hill’ which, despite the strange intro with a few seconds of slide guitar, reminds me of Velvet Revolver’s style, with piles of additional noise, creating magic from the chaos. ‘Chains of Pride’ is another fervent track, very deep, heavily pulsating and out of this world vocals, truly brilliant. The final offering ‘Get Loose’ has a really satisfying guitar intro and thunderous drums care of Joe Von Taine. It has just a simple, slow and sleazy pace, but the guitar solo gives it some extra body and it’s a decent number to finish the album.

Well, to be honest, I hadn’t heard of The Black Legacy before grabbing Black Flower to review. Apart from the production, which could have been a tad better, it is a worthy debut and they must be a great band to watch live. I can imagine them at an outdoor festival, strumming along in the Italian sunshine, in front of hundreds of adoring biker fans. I’m not sure how well they are known outside of their native land, but once the current situation subsides and we are back to normal, it would be cool to see them over here in the UK. In the meantime, if you want some simplistic, heavy and incredibly low and dirty rock, get a copy of the album and enjoy.

‘Intoxicating vibes start to ooze out of my headphones’

To purchase a copy of BLACK FLOWER see the bands record label or their own facebook page.