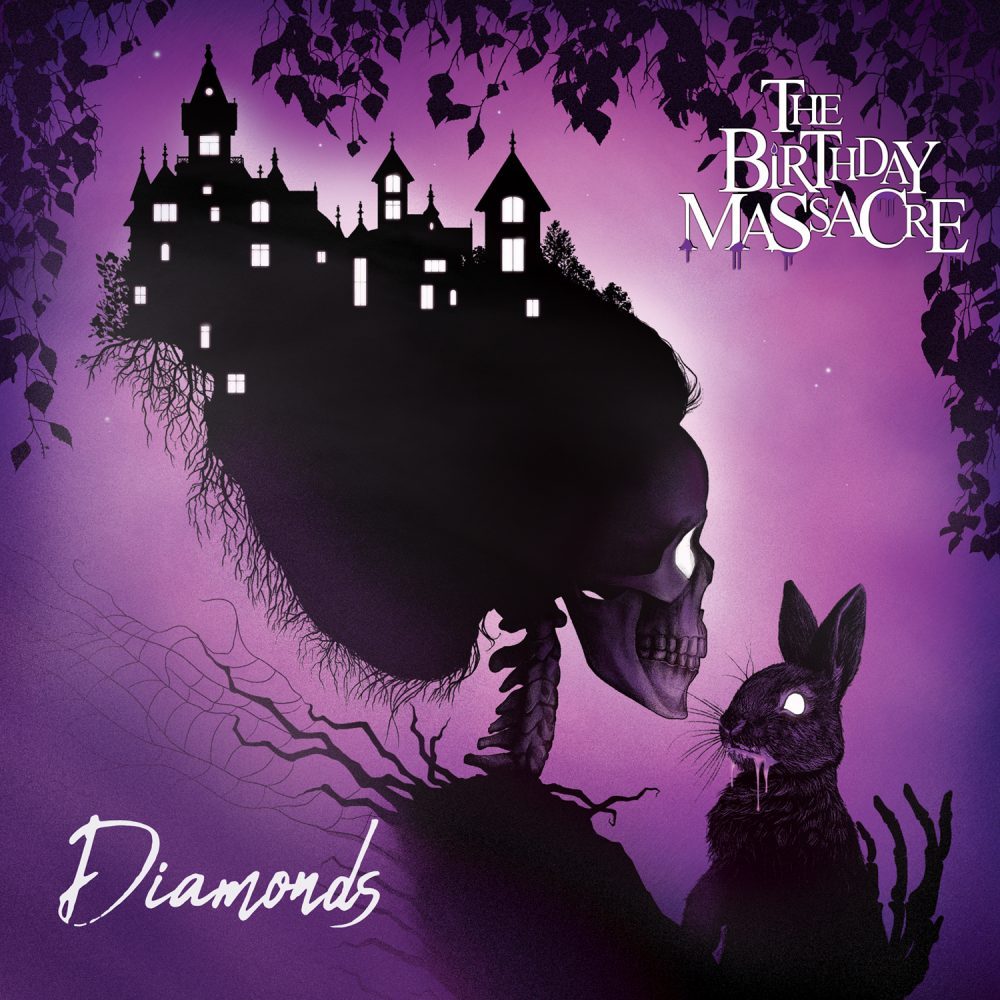 It’s been three years since last full-length release of The Birthday Massacre. I bet that all fans of grim rabbits, violet and contrast of cute and evil were eagerly awaiting a new album their beloved band. Little wonder that when they shared ‘The Sky Will Turn‘, single promoting the new album Diamonds, everyone held their breaths. This absolutely bewitching and beguiling track has really caught on. No surprise there, it’s impossible not to fall for Chibi’s beautiful voice weaving a gothic ballad, paired with dark wave and guitar sounds. I was wondering, if the rest of new songs would also bring this strange and unresisting comfort. After a careful listen, I can tell that at some point they do.

The Birthday Massacre is one those of ‘hard to tag’ bands. Their style falls into many sub-genres, creating a unique sound. Since the Nothing and Nowhere album, their idea of mixing extreme and contrasting sounds was a big success. It was continued and evolved on the next releases. Diamonds follows this trend. The album opens with ‘Enter’, quite a catchy track quickly proving that TBM didn’t lose their vibe. The next song promoted the album the album- ‘The Sky Will Turn‘. The first time I heard this one, I couldn’t stop myself from hitting a repeat button over and over again. It absorbed my mind and I also really wanted to hear this magical and confident Chibi’s voice singing more mature lyrics. I was, and I still am, under impression that TBM made a giant step forward and with Diamonds they present more sophisticated content. Titular track ‘Diamonds‘ lyric-wise, demonstrates the point perfectly, however musically it could be a bit more polished, I’m missing some kind of hook in this one. With ‘Run’ you can hear a big emphasis on an energetic and upbeat vibe. The new album sounds more pop-industrial than its predecessor. ‘Flashback‘ also starts with electro-pop beat and lovely combines dark vibes with a dancey, 1980’s sonic canvas. It’s well heard in the chorus, where guitar riffs blend well with heavy synth and electronics. On the opposite side, there’s the next track, ‘The Last Goodbye’. A great influence of light, electro-pop 1980’s cannot be missed, however TBM added a bit of modern-like twist, making it a very well structured song with a catchy rhythm. With ‘Crush’ band returns to a heavier sound, again blending their best, old but gold, techniques. Songwriting is taken up to the next level, but again there’s nothing that would make you stunned or surprised with the sound. It’s not bad, but I really couldn’t lose the feeling that I’d heard that one before and it was missing some twist. ‘Mirrors’ presents a good dose of industrial rock mixed with dark synth. Chibi’s vocal display guides listener through a well-structured track. Diamonds ends with ‘Parallel World’, a bittersweet lullaby, painting a very gothic scene.

Diamonds offers a nice blend of industrial influences presented earlier on Violet with a wonderful, vivid and mature lyrics and with electro-pop vibes known from previous releases. Vocals sound more powerful and confident yet remain absolutely charming and subtle at the same time, I believe that Chibi really developed her style. With a new album, The Birthday Massacre went deeper into 1980’s inspired dancey electro-pop, leaving, in my opinion, too little space for heavier synths and guitars. I really missed them on Diamonds. It was quite hard to find something new or ground-breaking, seems like they stuck to well-known techniques, instead of trying to introduce some more experimental elements. Still, The Birthday Massacre left us a lovely album that is easy to listen to and provides their famous picturesque gothic style taking listeners on a nice journey of contrasts.

Highlights: The Sky Will Turn, Enter

Diamonds is available from 27th March 2020 via Metropolis Records and can be purchased here.

For more on The Birthday Massacre visit: TBM Facebook