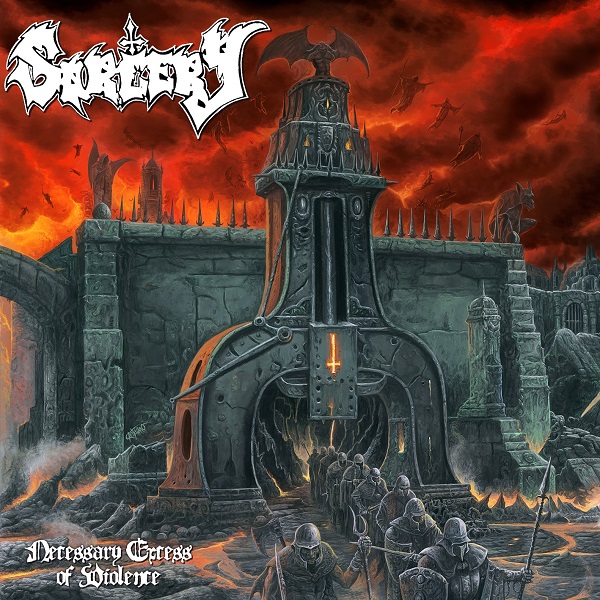 Whilst Sorcery’s ascent in the extreme metal scene coincided with the resurgence of the Swedeath style around the start of this decade, the group are actually old hat at this sort of thing, having released their debut in the early ‘90s. Intermittent activity followed until a split in 1997 and a subsequent reactivation in 2009, which has seen two solid slabs of grime soaked death metal issued in the form of Arrival at Six (2013) and Garden of Bones (2016). The five piece are looking to make it a hat trick with new album Necessary Excess of Violence.

At this point in the genre’s life, you’re unlikely to encounter anything groundbreaking, so albums such as this are dependent on factors such as atmosphere, songwriting and riff quality. Sorcery do fairly well on most fronts, although the atmosphere is somewhat lacking – many of the style’s classics (hell, even their own debut) have a wild, sinister edge, but Necessary Excess of Violence is simply another death metal album that does little to separate itself from the pack. To be honest though, I’m not sure the production allows for such atmospheric ventures, with the thick, chunky buzzsaw guitars and bottom heavy rhythm section filling almost every inch of audio space available. Ola Malström’s throaty barks, like a slightly gruffer David Vincent circa Illud era Morbid Angel, offer enough bite, with the conviction of delivery overcoming any moments of weakness that do occasionally pop up.

Luckily enough, the songs themselves are pretty good, although I’d hesitate to say there’s anything great here. There’s a few tracks that almost break through that ceiling, but when I look at them in the broader context of the genre, they’re nothing special. Those in question include “The Darkest Part of You”, with its mix of ridiculously heavy melodeath guitar work and devilish tremolo riffing, and “Of Blood and Ash”, which offers roving dynamics as it fluctuates between a heads down steamroller and a more reserved aural inferno. “Language of the Conqueror” is also worthy of note; sure footed in its position as a closer, its final passage of pure Swedevastation will delight anyone who even half enjoys this sort of thing. There’s promise shown in many other songs, but they don’t quite hold it together well enough. “Where We Were Born We Will Demise” is a prime example, which is let down by an overly busy drum performance from Tommy Holmer. He beats the kit like a madman and throws in some tasty fills, but sometimes his kick patterns and cymbal work are too flashy, when all the song is crying out for is a simple beat to anchor it.

Like many Swedeath albums I hear these days, Necessary Excess of Violence serves up a competent but unspectacular experience. Whilst some of the songs hit all the right notes (and nothing stinks the place out), there isn’t anything here that’s going to make you cast aside the classics or modern releases that do this style better. If you’re a fan of the genre then you’ll be checking this album out anyway, but if you’re not, then you’d be better off digging around for the records that really nail the sound before sinking your teeth into lesser retreads such as this.

Highlights: “The Darkest Part of You”, “Of Blood and Ash”, “Language of the Conqueror”

Necessary Excess of Violence is available on August 20th via Xtreem Music, and can be purchased here.