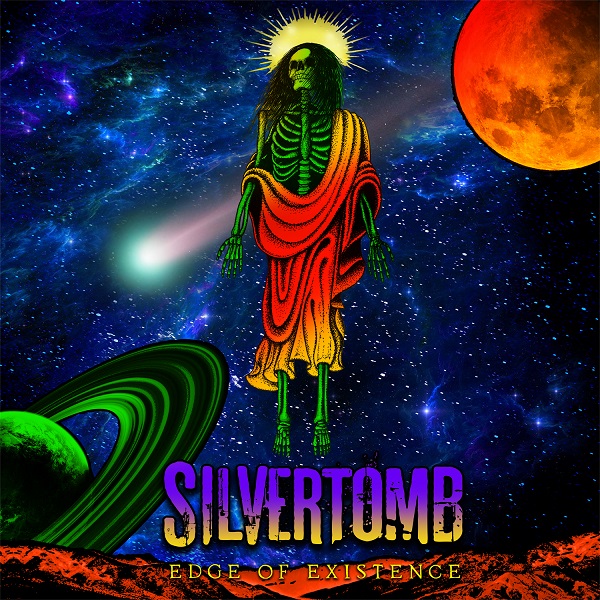 This has been a long time coming. The metal world has been starved of Kenny Hickey ever since the release of the solitary Seventh Void record in 2009 and the dissolution of Type O Negative (TON) following Peter Steele’s death in 2010. There have been intermittent live appearances, but Silvertomb’s debut Edge of Existence represents his first studio output for a decade. With Hickey teaming up with the likes of long time comrades Johnny Kelly (drums), Hank Hell (bass) and Joseph James (guitars), the pieces are all in place for a great record.

Although Seventh Void has been disbanded, Edge of Existence can be seen as an extension of that project. Bleak, grunge infused doom is laced with faint glimmers of hope and melodicism, with any smooth edges roughened by the production style. There’s an abrasive feel to the guitar tone, with even the more accessible guitar patterns and vocal hooks darkened by a shady veneer. Kelly’s drums pound like ten ton slabs of concrete, imbuing the music with a draggy effect akin to a huge, lumbering beast, whilst Hickey howls like a wild banshee over the dense musical mire. Hickey puts in a real warts and all performance, and though time has thinned and softened his coarse timbre slightly, he can still belt out the sort of wails that endeared him to so many people during his tenure in TON.

The most apparent difference between Silvertomb and Seventh Void is a more cavalier approach to songwriting, with the music on Edge of Existence less reliant on conventional structures. This is most evident on the tracks in which two distinct parts are segued together to become one, seamlessly bleeding into each other in an engaging use of dynamics. This album has been described as a product of Hickey’s struggles over recent years, and this is mirrored in the way these songs constantly shift between moods. “Insomnia” is simple yet hypnotic, with a cyclical guitar melody laid over a big ol’ ball o’ doom; a complete juxtaposition to the pretty but gritty little ditty in the “Sunrise” coda. It’s the same story with “Right of Passage”, where the slow descent into a murky chasm of oblivion is at odds with the stunning, emotive solo that defines “Crossing Over”. Hickey has always been an underrated player, but if there were any lingering doubts about his abilities, they’re more than put to eternal rest here.

Silvertomb haven’t completely dispensed of simpler compositions though, and many of straightforward tracks are just as good as the adventurous ones. The propulsive riff on “One of You” models itself on the Sabbath archetype (complete with trill); its energy matched by a thunderous bridge complete with a rip roaring lead break, whilst the grinding doom of “Not Your Savior” cannot shackle the rugged beauty of its outro. “Waiting” is a stripped down, grungier endeavour that just flat out rocks, ending the album on a positive note (at least in comparison to everything that preceded it). It’s the perfect way to close, as whilst the demons that dominate the record have not been laid to rest – nor may they ever be – you feel that the despair has subsided to a point in which it is no longer a potent force.

I wasn’t immediately blown away by Edge of Existence, although it was the same with Seventh Void’s Heaven Is Gone all those years ago too. By my third spin however, I was won over. There’s a weariness to this record that I think everyone can relate to, and it’s this unabashed honesty that gradually draws you in. People change a lot in 10 years, but one thing that hasn’t is the quality of music that Kenny and co produce. A very welcome return indeed.

Highlights: “Not Your Savior”, “Right of Passage / Crossing Over”, “Waiting”

Edge of Existence is available on November 1st via Long Branch Records, and can be purchased here.