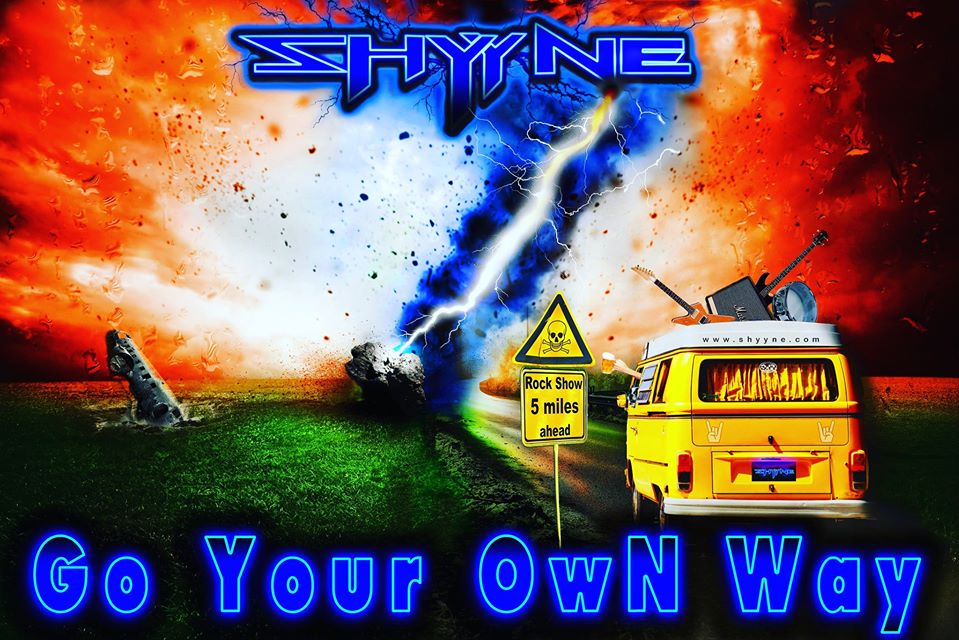 The Black Country Glamsters are back riding high in their sleazy rock and roll saddles. A new album from Wolverhampton’s answer to Mötley Crüe, is just what we need right now. Released on Friday 4th April, the first 50 CDs were signed copies, although I guess they went like hot cakes. 2017 saw the addition of Matt Freeman on bass and drummer Ritchie ‘Bev’ Bevan, to the dynamic duo of frontman Toni Gale and guitarist Mark Wilkins. They have gone sky-high since then, developing into one of our finest examples of scarf wielding combos.

’Say Goodbye’ has a crisp and fluent riff alongside punching vocals, this first number is a fine example of all that Shyyne are about. Gale strikes a few ‘whoos’, Bevs drumming comes through the shiny haze of guitar solo’s, blazing and it’s five minutes of pure enjoyment.

‘Movin On’ has more rattling and gorgeous harmonies, turning this song into another delight. The guitar of Wilkins is quite exceptional, he is well underrated, just listen to him on ‘Feeling Fine’ with its heavy stance. There are several layers on ‘Broken Down Girl’ that give it a powerful front. More easy going vocals and it flows nicely into the title track ‘Go Your Own Way’ which is masterpiece of sleaze rock, it’s like finding all your favourite chocolates in one bag. Tottering along with a subtle, underlying guitar hook, Gale is again the hero, brandishing glossy lyrics and chorus of high magnitude. ’Show Me’ comes in with a more mellow guitar intro, a smoother and slower start is soon pumped up with more lyrics of desire, descending into near spoken at times. It has a gentle groove and some awesome doo-wop’s, smelling the essence of Dave Le Roth, right there. I just adore the riff on ’Take Me Down’ and it epitomises Shyyne, rushing, gushing and catch that guitar shredding. Skillfully written and sticks like fresh, you know what , on your boots.

The force of ’Shut Up’ is manic and ever so dangerous, it’s like Van Halen meeting Mötley Crüe in a dark alley and then sauntering away with echos of screaming guitar. The vibe continues on ‘Ain’t A crime’ and ‘Friday Nite’ where the bass of Freeman is particularly strong, having all the elements of those LA idols from the late 80s. The twelve tracks end on the latest single ‘Song For The Broken Hearted’ a ballad, full of poetic chimes and straight from the heart vocals. A decent finish to a well co-ordinated album.

This line up has given Shyyne a new lease of life and away from all the glitz, cheese and tongue in cheek patter, this is one band that continue the trash/glam lineage preventing it dying out completely. Long may Mr Gale and company carry the tattered flag of gutter rock, guys I for one salute you.

‘Skillfully written and sticks like fresh, you know what, on your boots’

HIGHLIGHTS –  Feeling Fine , Take Me Down , Shut Up , although I could list several more !