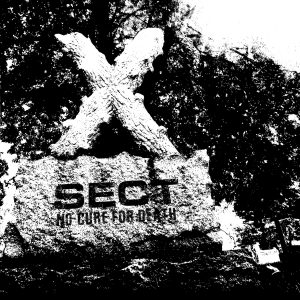 Among the many bands that called it a day in 2017, Trap Them announcing they’d no long produce music is one of the most painful losses to the landscape of heavy music. It’s a good thing that Sect clearly love Trap Them. However, Trap Them brought a craft to their crust punk attack that elevated the music from Neanderthal aggression to beautifully constructed violence. Sect have positioned themselves in the shadow of one of the greatest bands in the history of music, and everything they do on No Cure For Death will be compared to them.

Luckily for Sect, I also bloody love Trap Them. No Cure For Death plugs the Trap Them shaped hole in my life. The nihilistic, bleak slabs of aggressive hardcore sound like they could come from the cutting room floor of last year’s Crown Feral. I don’t think there is the same level of craft present here, but by keeping the run time of the album down to sixteen minutes and fifty seconds Sect prevent the album from becoming stale. The short length of each song, with only two over two minutes, give the songs an impact that a longer length can lack. It feels like you’re clinging to each song for a sense of stability as you’re thrown from track to track with total disregard for traditional song structures. These songs end when Sect want them to end, and not a second after.

Sect showcase a talent of their own on the track Crocodile Prayers, during which they hit a simple groove. One of the restrictions of keeping songs so short is that I’d have liked to have heard more of this groove, but it’s over nearly as quickly as it starts. Born Razed begins with a similar groove which is also over incredibly quickly. As much as I love this groove it’s painful not to have more of it, as I think it could really elevate the album to the next level and give Sect more of an identity of their own. As it is the few moments of groove on display, they are fresh enough to improve the album overall even if they are not used to their full potential.

Album closer Avoidance Ritual is perhaps the best song on this album. This song brings a slower tempo, building feel to the verses and the tension is stretched to breaking point, before slamming into a slow grinding chorus. This excellent use of song structure more than warrants this being the longest song on the album, still only three minutes and ten seconds. The slow parts on this album aren’t necessarily evil or brooding in the way that the slower moments on Trap Them’s Crown Feral are; they are more a way to build tension, meaning they serve a slightly different purpose. This gives Sect more of an identity of their own.

It’s very difficult to talk about Sect without also referencing Trap Them, which doesn’t always work to Sect’s favour. However, by taking the core Trap Them sound and bringing a few elements of their own, positions them well for future releases so they can grow out from the shadow they have taken shelter under. No Cure For Death may not have reached the heights of Darker Handcraft or Crown Feral, but with more experience Sect’s song writing skills could still reach those lofty peaks. Mark Sect down as one to watch.

No Cure For Death is out 24 November 2017 via Southern Lord Records, it can be purchased here.