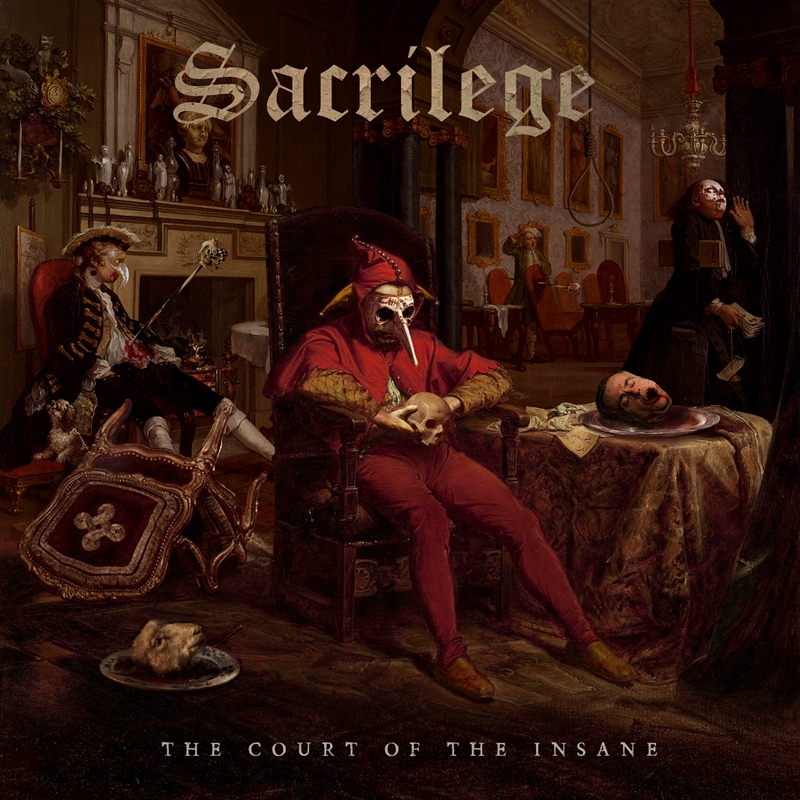 For those of you who were around during to original rise of the New Wave of British Heavy Metal (NWOBHM), Sacrilege may be a familiar name. The band first surfaced in the mid-eighties, being penned alongside names like Iron Maiden, Saxon, Def Leppard as part of this tide of new and heavy music. But circumstances were not on their side it seems. Founding member Bill Beadle called it quits in 1987, only returning to music a quarter of a century later when he reformed Sacrilege in 2012. Since then, the band have signed to Pure Steel Records and released a compilation album of their early work plus a second album of new and original material (entitled six6six) and thus their rejuvenation was kickstarted. Now settled, the band are ready to release their latest offering, Court of the Insane.

Whenever I see a band compared to classic NWOBHM acts, my mind always goes, rightly or wrongly, to the frantic and unprocessed sound of early Iron Maiden and Judas Priest albums. This left me unprepared for just how polished and warm the production of Court of the Insane is. Right from the opening chords of “Celestial City” you hear a very wide and full sound, with nothing in a way of harshness or aggression. This is completed by the deep and rich timbre of Bill Beadles vocals. Any fans of Matthew Barlow (Iced Earth, Ashes of Ares) should find a lot to be happy with here. It’s all very refined and well put together, showing a Sacrilege who are acting their age rather than trying to re-live the vigour of their youth in that cringeworthy manner that many older bands manage. Vince Neil squeezing into a leather waistcoat to butcher a rendition of “Kickstart my Heart” this most certainly isn’t.

In terms of the actual songs, this means that Sacrilege opt for engrossing melodies and tight rhythms rather than just aggressively hammering out a riff with a shout along chorus. “Lies” sounds like a doom-tinged Judas Priest, with harmonised, galloping riffs underpinned the smooth vocal delivery. Title track “Court of the Insane” opens with a brief spoken introduction that doesn’t really work as the delivery doesn’t carry any weight, but the rest of the song makes up for it with it’s repeated chorus line that should go down well in a live setting. Spoken introductions are used again on the follow up track, which opens with the sound of horse’s hooves and a man calling for people to “Bring Out Your Dead”: an opening sequence that I cannot take seriously because my mind always drifts to the Monty Python sequence of the same name. Unlike the title track, there isn’t really a standout feature of this one, with everything being pretty by-the-books classic metal. A slight doom influence becomes more prominent on the slower, Sabbath-esq riffs of “Depression” and “No Bequeath”, before returning to a classic melodic chug on “The Prophet”, a song with a chorus that sounds like it needs a little extra kick to reach the heights it is aiming for. Some backing vocals or a little more oomph from the vocal delivery would solve the problem and is one of the moments where the lack of in-your-face energy is a problem. It makes “The Prophet” one of the best and one of the most frustrating tracks on the record.

My overarching impression of Court of the Insane is that Sacrilege are a band who are comfortable and settled in what they are doing. The refined and warm sound discussed earlier make the whole thing a very pleasant listen and I enjoyed the vast majority of the album. Yet after several listens I still struggled to remember what more than a couple of the songs actually sounded like, highlighting that, while very well crafted and delivered, there was little to trigger any kind of response in the listener. Objectively, there is little to criticise in any of the song writing, yet it lacks that excitement to really grab you. It will be a fine addition to the collection of die-hard fans of the 80s British heavy metal scene, yet I doubt it will become essential listening for any newcomers.

Highlights: “Lies” and “The Prophet”

Court of the Insane is out now via Pure Steel Records and can be purchased here.