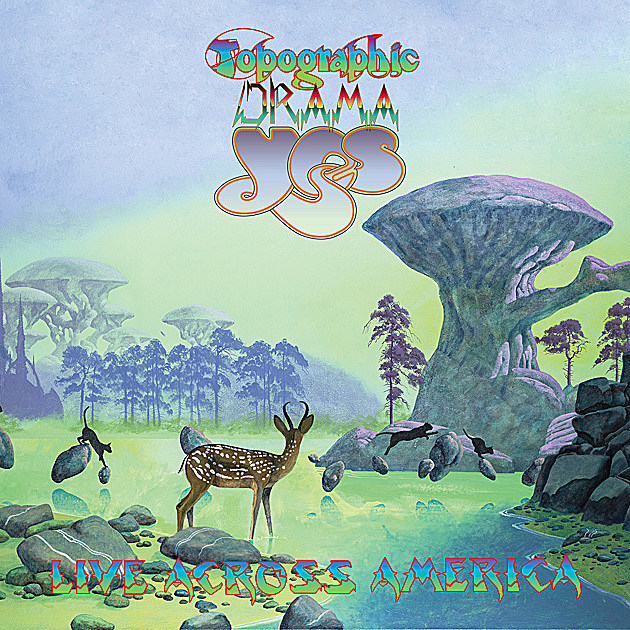 Do I really need to ask if you’ve come across Yes before ?? Seeing as they’re just about to set out on a string of gigs celebrating 50 years as a band, I reckon there’s a good chance you’ve heard of or come across Yes at some point, especially as they were part of what I would call the “first generation” of Progressive Rock bands….Now, along with King Crimson, both bands have had a revolving-door line up, but they’re still out there, flying the flag…respect is due !!

So, a new live album, yet ANOTHER live album you may add for there are more than a fair share of live Yes albums, the pinnacle would have to be Yessongs for me to be honest – a triple vinyl release from 1973 with an absolutely to-die-for Roger Dean cover.

The good news is, this production is housed in yet another Roger Dean masterpiece that incorporates images and elements from the original covers of the two albums showcased here, can the guy do no wrong ?? What about the music ?? Well for the very first time we have the ENTIRE “Drama” album from start to finish, plus (what would have been) side 1 and 4 of “Tales Of Topographic Oceans” plus “Leaves Of Green” – a brief foray into side 3 of that classic album.

On top of that, we have some Yes classics, which may well resurface during the upcoming tour – Roundabout, Starship Trooper, And You And I and Heart Of The Sunrise.

If you’re a Yes completist you SO need this album, but what about the rest of us ??
There’s no denying these guys can play and with newcomer Jon Davison on lead vocals and Billy Sherwood ably stepping into the mighty shoes of Chris Squire, close your eyes and you’ll be transported back to the 70s, the defining era for Progressive Music. Unlike the aforementioned “Yessongs”, there is no improvisation to speak of, all tracks are reproduced faithfully to the standard set by the original releases and as Geoff Downes played on the original studio version of “Drama”, we have continuity. What is nice is to hear this classic Yes album from a different perspective as Trevor Horn had took on the role set in stone by Jon Anderson and cruel though it may sound, Monsieur Horn was never a substitute for Jon’s angelic croonings – hearing it live from the current line-up, it’s the closest you’ll get to hearing the original “Drama” album if Jon Anderson had been with the band back in the day, plus it’s highly unlikely the band will feature the ENTIRE “Drama” album live again !!

With so many live albums in their back catalogue, it could be argued – “do we really need yet another live release” ?? As far as I’m concerned the answer is (excuse the pun) a most emphatic YES.