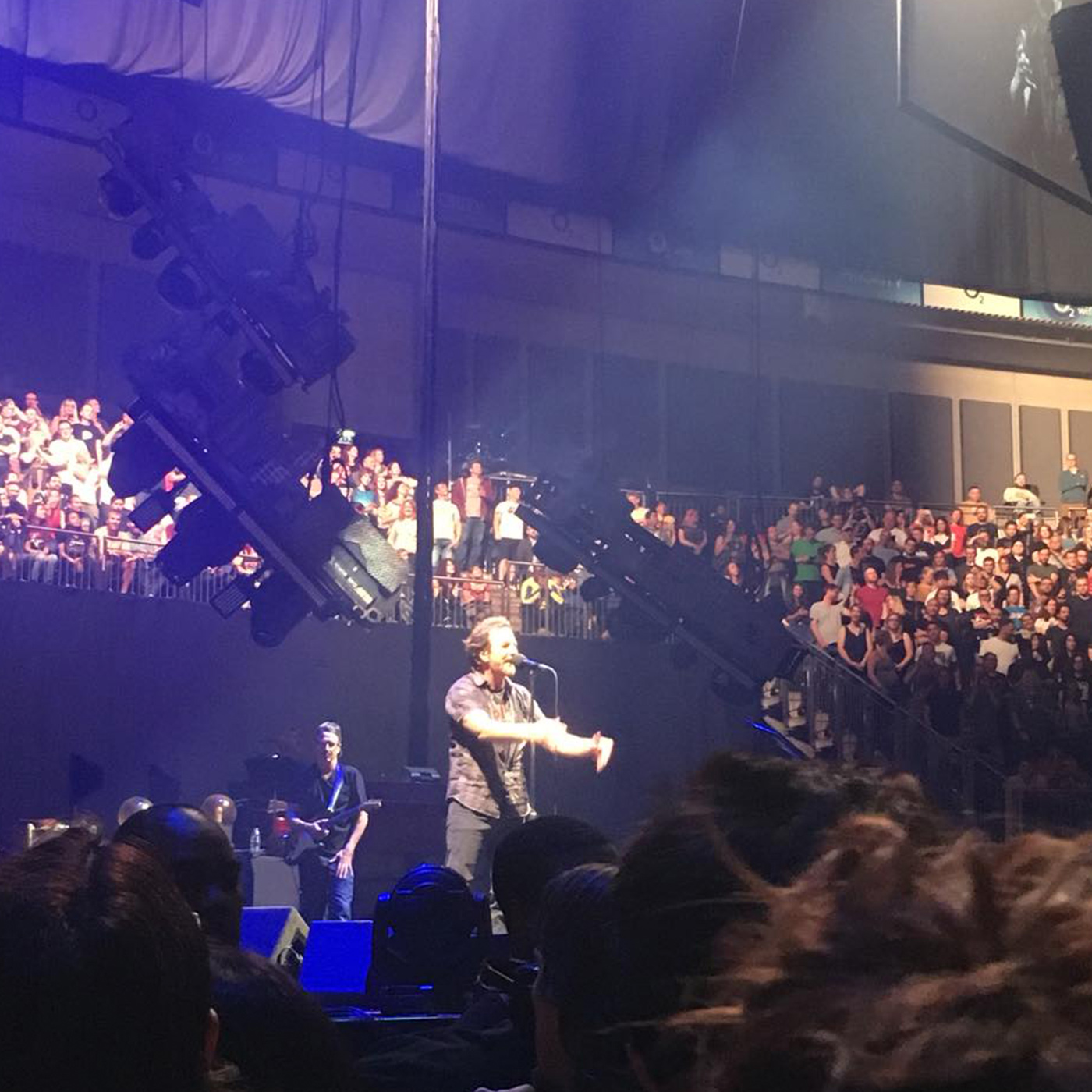 Tuesday morning I woke up with THE most incredible feeling that I am confident was felt across the 20,000 people who attended the O2 Arena, to see the grunge gods Pearl Jam! Especially hearing the news that every hardcore fan dreads to experience, the cancellation of their following night in London due to Eddie Vedder loosing his voice. I felt truly heartbroken for any fan that was due to attend that gig knowing how much it would have killed the band to cancel and how much they put into the gig the night before….

The thing I love about PJ in particular is that you never know what you’re going to see them perform. This band is notorious for their change of set list every night of their tour, hence why it is a ‘Ten Club Traditional’ for fans to follow them around the globe on their tours to see them perform a variety of classics from their phenomenal back catalogue. It is a family community at any of these gigs with fans looking out for one another, making friends, buying each other a beer, talking about past gigs, where their next one is and of course, the first timers who are welcomed with open arms!!

I was surrounded by generations worth of Pearl Jam fans including groups of friends, fathers with daughters, mothers with sons, couples and people, like myself, who attended the gig solo and ended up spending the evening making friends from people in seats around me from all around the world! The ‘loud love’ and open community feel was at its peak before the five piece hit the stage!

The crowd started filling up as the arena was pouring with fans of all levels anxiously waiting to see what opening lyric would emerge from Vedder’s voice. As they appeared on stage to Philip Glass’ ‘Metamorphosis II’, each getting a thunderclap of cheers, we were slowly introduced the opening of the set which was the Gossard original  ‘Of The Girl’; from the bands sixth studio album ‘Binaural’. No one had a clue what treat we were in for, for the rest of the gig….

Carrying on through the set, we saw lit-up oval balls appear at different heights across the stage that would change colour depending on the tone of the song. Vedder expressed during the show about seeing a throat doctor during that day who has helped with artists like Adele, and jokingly asked the doctor is he could make him “sound like her”. From this, Eddie also expressed to the crowd “the angry songs might be angrier, the sad songs might be softer but everything else I need help with, is that okay?” of course the crowd had no problem helping him sing LOUD to some of the bands iconic songs such as Even Flow, Deep, Do The Evolution and their their latest single release ‘Can’t Deny Me’. His ‘medicine’ was his routine bottle (or three) of red wine that he shared out with the crowd before performing ‘Do The Evolution‘ before feeding it through a Donald Trump mask.

There was always going to be a political based comment from the guys who are known for ‘sticking it to the man’ when their beliefs are concerned and this night was no different. Just before McCready screeching guitar riff to ‘LBC’ Vedder expressed the bands feelings towards the horrendous border control that is currently taking place (in 2018…) in America. Quoting “I would like to send this one to the guy who is in the White House back in the United States. I would like him to hear it, but he doesn’t listen to music or read books. Could someone tweet this to him or something? For moms and dads and children being separated at the border. That isn’t the country I remember.”.

During their encore, we were lucky enough to hear the likes of Mind Your Manners and Sleeping By Myself from their last album Lightening Bolt (2014), but also reminiscing tracks from their iconic first album ‘Ten’ named after basketball player Mookie Blaylock’s shirt number. The crowd roared for Why Go, Black and Alive, but what stunned me was the overpowering sound of the crowd singing Betterman back to Mr Eddie Vedder who was suffering from a sore throat.

For those hardcore fans, seeing PJ perform ‘Footsteps’ was a special time of the evening. This particular song featured on Vedder’s audition tape for the band that he named ‘Momma-Son‘ back in 1990, the fact they are performing this single after all these years of success with fans singing every world is pretty magical. Fans who were sat behind the stage even had their own song sung the them when the band too all their instruments and faced the back of the stage for a very personal rendition of ‘Last Kiss’.

All in all, a beautiful evening filled loud love, great music and hundreds of thousands of memories. Thank you Eddie, Stone, Jeff, Mike and Matt, keep on rockin’ in the free world.