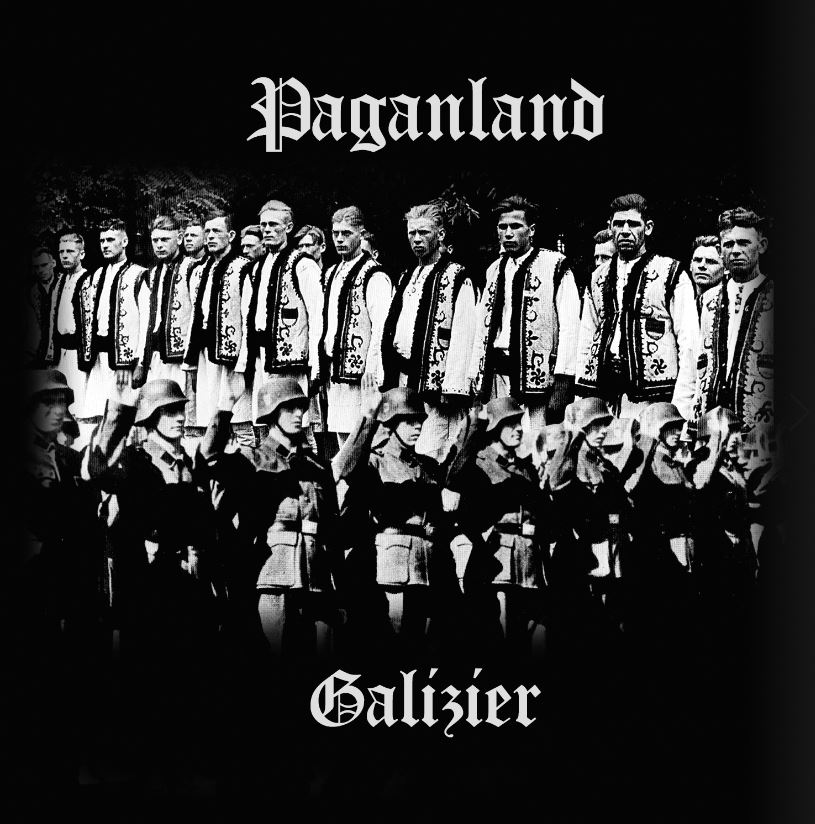 Paganland, is a pagan black metal, Lviv-based band that has had its rough patches in the past, yet remained strong thanks to Ruen, keyboardist and main brain behind the band, who brought it back to life in 2010 marking its new direction out. Still, in my humble opinion, Paganland stayed way too underrated act for its efforts, quality and skills put out into its music. Ukrainian black metal has something unique and cutting-edge in its sounding that spurs and prods to discover more. Paganland’s folksy and solid blend stands out from others labeled as folk black metal bands. I couldn’t be happier when first heard of their new release, but reviewing Galizier at first seemed to be like stirring up a hornet’s nest…

After From Carpathian Land, Paganland’s last LP release, I was expecting something heading into a similar, poetic in nature, heathenish and atmospheric theme. This album was well refined and revealed a great musical artistry and proficiency of the musicians behind it. However, it seems that their talent has the other side if the coin. Since Fatherland, despite being a decent album, Paganland’s been unfairly faulted and accused of having nationalistic tendencies. The band claimed that they’ve no interest in any political trends. It is though, quite hard to believe while looking at the cover of Galizier bringing National Socialist connotations, that are disclaimed by Paganland. It’s even harder to turn a blind eye to that, knowing music played by their countrymen, far-right extremists from Nocturnal Mortum and understanding Ukraine’s boiling up politics and raising national spirits, inspiring events like Asgardsrei, a NSBM festival in Kiev, attracting musicians and fans of this extreme and controversial genre from all over the world. Anti-system moods are the foundations of black metal and there’s no surprise that music reflects current nationalist Ukrainian mindframes. Still, I’ve never seen Paganland as a nationalist band, but always as one that derives from its great mother country and gloryfies its beauty, culture and history. And despite the first surprising impression on their new album, I still maintain my view. As they say, never judge an album by its cover. And yes, I’m here to review an album, no to discuss the political tendencies.

Galizier, that primarily was announced to be released in autumn/winter 2019 under the name галичина (Galicia), is Paganland’s 4th LP release. It’s dedicated to The Ukrainian Galician military formations, 14th Division Grenadiere der Waffen-SS ‘Galizien’ that fought against invaders, not for Hitler’s Nazi Germany, but against ‘the red plague’, communist infraction. This relatively short, because, at only 32-minutes long, album compromises seven tracks, together with previously released single In the Heart Forever. It opens with an instrumental intro Brody-Feldbach (Броди-Фельдбах) presenting and revealing its melodious and quite a solemn theme recurring throughout this release. The Legionary (Легіонер) is a great combination of Reun’s powerful keyboard riffing and heavy feel of guitars and drums. D.L.’s blackened death vocals add some wildness and raciness to the overall impression. He is a fit heir of a previous vocalist, Zymobor, and his voice nails Ukrainian lyrics deftly. Next track, In the Heart Forever (Назавжди у серці), is a single released in August 2019 promoting Galizier. It’s a nostalgic tale of a beautiful homeland staying forever in the heart of a soldier trying to forget about the past. Music-wise, it’s easy to spot that Paganland went into a heavier direction. Keyboards add this lovely melodiousness, instead of overwhelmingly dominating the track, as it happened on previous releases. This heaviness continues in Ideology (Ідеологія) that is distinguished by fast-paced guitars and thrashing drums. UGA (УГА), Ukrainian Galician Army, tells a story of a soldier from some western Ukrainian village, who survived through the Great War at the Italian front and came back home in autumn of 1918 to take part in a defensive war against Poland. This track is a mature example of a well composed melodic black metal track exposing distinctive extremism expressed with distorted and blasting sounding with a biting touch of keyboards. It is one of the highlights of Galizier. Galician Night (Галицька ніч) shows a real musical pursuit put into it. It’s a well polished track bound by all efforts and passion used to create one, giving it a genuine and honest feel. Closing track, Von Wachter (Фон Вехтер), is a reference to Baron Otto Gustav von Wächter, a Nazi politician and a high-ranking member of the SS who was a Governor of the District of Krakow and after Operation Barbarossa, also of District of Galicia. He was the one who established SS Division Galicia, renamed later to The 1st Division of The Ukrainian National Army, to fight against the Bolsheviks. This track presents quite an obvious political tendency and has a military-like feel. Music-wise, it doesn’t depart from the other tracks, but binds them all, highlighting the general idea behind Galizier.

Despite being a bit preconceived in the beginning to Galizier, but having in mind a good impression of Paganland, I can tell that their new album has much more to offer than it may seem at a first glance and discovering the truth behind was a great pleasure. With their heavier, yet still very melodious approach they presented another decent piece. Paganland was able to tell the world about Ukraine’s tough history of ongoing struggle with Russia in their own style, pleasing fans of pagan and melodic black metal. I really hope that everyone listening to Galizier would be able to look beyond and truly appreciate the band and their talent. They really deserve to be known to a wider public.

Galizier is available from 29th Feb 2020 and can be purchased here.