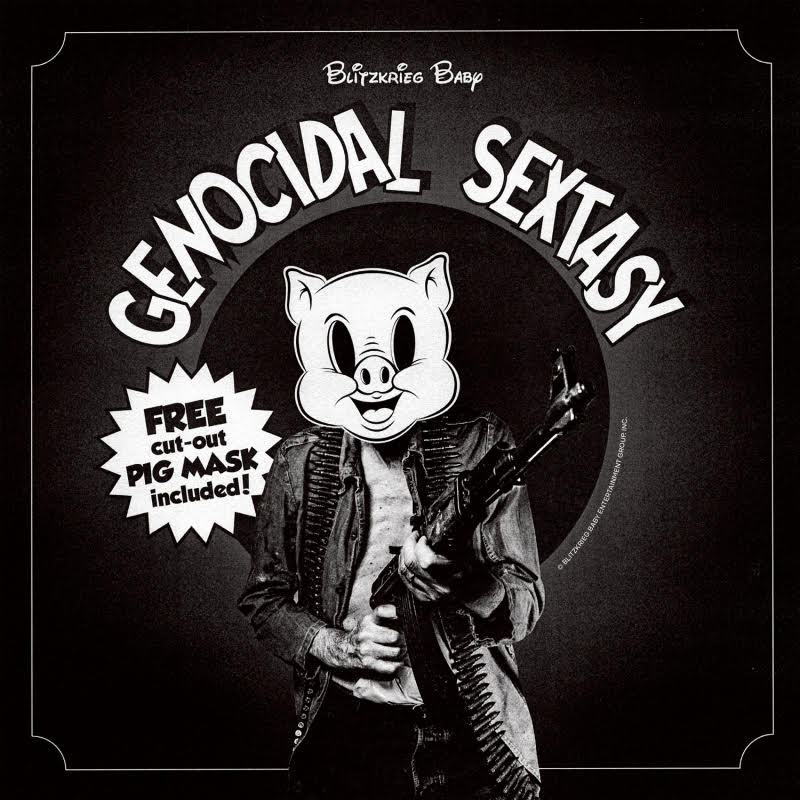 In a year already defined by society coming to a standstill at the behest of a global pandemic, the arrival of Blitzkrieg Baby’s new LP Genocidal Sextasy commands rumination with an acerbic irony. Since the early 2000’s Norwegian artist Kim Sølve has carried forth Blitzkrieg Baby as a timely exploration of humanity’s hubris and callousness, a bleak and pessimistic trawl through the dregs of mankind’s selfishness and cruel arrogance that paradoxically operates as a cathartic confrontation of 21st century existential dread.

Rooted in both the sequenced thump of EBM with the dusty spectre of death industrial grime and dark ambient unease, Kim Sølve and his collaborators (Bjeima, The Right Reverend Mr. B, Aymeric Thomas, and Frederic Arbour) have crafted a steady and unhurried oscillation, rhythmic tracks mirroring a sluggish dance of the dead clamouring for reconciliation that never manifests. Everything from Laibach’s militaristic stringency to even Alice Cooper’s gallows theatrics signify themselves over the albums eleven tracks.

Whether audiences in this fraught year find Genocidal Sextasy as a confrontational purge of relentless trauma or a too-close-for-comfort slap in the face of extremely timely anxiety will perhaps depend on the person. In the meantime, Blitzkrieg Baby has provided another tough pill to swallow that will no doubt leave fans of uncompromising industrial and extreme electronics clamouring for another fix.

Along with the vinyl release of Genocidal Sextasy, Cloister Recordings is also releasing Blitzkrieg Baby’s debut album Porcus Norvegicus (2012) on vinyl for the very first time.
Kim Sølve is for music enthusiasts most known for his work with Trine + Kim Design Studio, whom has since the shift of the millennium created artworks for Mayhem, Ulver, Darkthrone, Enslaved, Shining, Solefald, DHG/Dødheimsgard, Virus, Ved Buens Ende, and many more.